Moving On: Another Angel

Cancer blogger Carrie Miller Corey passed away in March, but left behind a son, a legacy and many priceless memories.
BY Kathy LaTour
PUBLISHED April 20, 2016 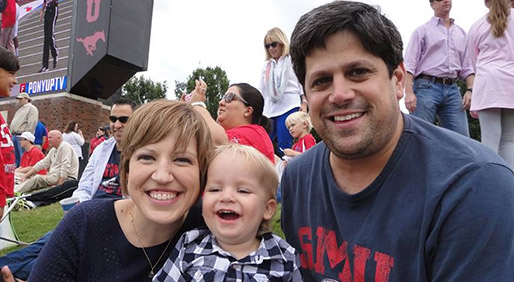 Carrie Miller Corey, her son Henry, and her husband Chris.
Many of you followed the blogs of Carrie Miller Corey and her journey with metastatic breast cancer over the last few years. She last posted in August 2015 about the struggle she and her husband faced raising their 4-year-old son, Henry, while trying to find the next clinical trial that may work to extend her life.

Carrie died on March 25 and was buried on her 36th birthday. She had begun another clinical trial, and it was Carrie's mother, Lana, who took the call from the trial physician who said that the trial was working on her brain mets, but her liver was progressing and unable to process any more drugs. Lana called Chris to give him the news.

The news hit both Carrie and Chris hard, Lana says. She had fought to live for the past four years after she learned her breast cancer was back, but Carrie's body was giving out.

Tragically, Chris — who Lana described as so full of life and love for Carrie — died just five days before Carrie, on March 20.

It broke my heart that Chris and Carrie died. She was a former student of mine, and I recall her as the kind of student every college professor wants: committed, engaged, smart and eager. She quickly advanced in the PR field until her disease progressed to the point that she could not work.

We went to a meeting in Houston a few years ago, and during the drive from Dallas to Houston we talked and laughed about our children and life in general. She and Chris brought Henry home two weeks before Carried learned her cancer was back. He was a gift from God and gave the couple so much joy, Lana says.

Carrie was one of those patients who thought of others before herself. Lana relayed the times Carrie helped others who she came in contact with at MD Anderson in Houston, where she was treated. In one instance, Carrie met a woman who arrived not knowing she would have to stay more than a few days. She had lung cancer and was staying at a cheap hotel with no extra money for food or clothes. Carrie and Lana went shopping for food that she could prepare in her hotel while beginning chemotherapy. She also bought the woman some clothes to get her through the week. They also met a mother and her 36-year-old son who had a brain tumor and was going through radiation treatment. They became friends, and Carrie decided she and Lana would take them out for a Tex-Mex dinner since they were from Indiana, Lana says.

Carrie encouraged him not to waste time, but to enjoy every day he was given. As you can imagine, Lana is still devastated, and I am sure she would love reading comments from those of you who found comfort in Carrie's words. In addition to caring for Carrie, Lana and Carrie's stepfather, Bob, worked to raise money for metastatic breast cancer through Volunteers 4 Warriors. To date, they have donated $72,000 to METAvivor. Lana loved Carrie with all her heart. For the past four years, she has helped raise Henry. She now has custody of their "little guy" and she will be able to transfer all the love she felt for her daughter to her grandson.
Be the first to discuss this article on CURE's forum. >>
Talk about this article with other patients, caregivers, and advocates in the Breast Cancer CURE discussion group.