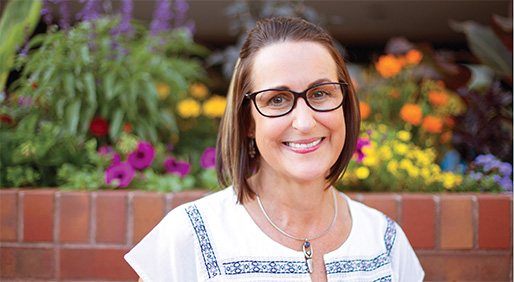 I decided that as long as I was alive, I needed to be a voice for this disease. We don’t blame victims for their disease — we help them.
— MICHELE LONGABAUGH, patient - PHOTO BY JENNY MYERS
As she edged closer to 50, Michele Longabaugh resolved to take better care of her health and scheduled a well visit with her doctor. The 47-year-old resident of Wichita, Kansas, told him that the main thing bothering her was what she assumed to be a painful and persistent hemorrhoid.

“There were only 37 slots for the trial, so I was very lucky to participate. That treatment really spoiled me because the immunotherapy was very gentle,” says Bitner, who responded to Opdivo but was not cured. “I’ve been in and out of chemotherapy for 12 years, and it by far beat any chemotherapy I had ever received.”

Who Is at Risk?

The virus spreads through skin-to-skin contact with an infected area of the body. For men, being uncircumcised or having a high number of sexual partners can increase the risk of HPV infection. Women commonly contract the virus at a young age — under 30 years old — and certain types of sexual behavior can heighten their risk. For instance, having sex at an early age or with many partners.

An extensive procedure that removes the anus and rectum, called abdominoperineal resection, is only used for refractory disease.

After having surgery to remove her tumor, Longabaugh went through a grueling treatment of chemoradiation with side effects that included uncontrolled diarrhea, pain, hair loss, nausea, vomiting and a feeling of uneasiness.

The treatment worked for a while, but then the cancer came back in her lung. Bitner’s disease recurred multiple times, with doctors finding cancer first in her liver and then upper rib. Both women found themselves back on chemoradiation — a treatment typically used for local disease — only two years after their initial treatment.

Opdivo showed limited toxicity in the trial and was mostly well-tolerated by patients. Grade 3 toxicities occurred in five patients and included anemia, fatigue, rash and hypothyroidism. Eng stresses that immunotherapy does have its own set of side effects and is not toxicity-free.

Overall, Zheng thinks the trial findings show promise and predicts that Opdivo will soon get approval by the Food and Drug Administration (FDA).

“I have to point out that this is still a small study — there were only 37 patients, and I definitely think the results need to be validated in a larger study,” he says. “But based on the results, and also the rareness of the disease, I don’t think the FDA will require a randomized trial to prove this treatment.”

A larger study would also help determine which patients would be the best candidates for immunotherapy. As of now, it remains unknown if any particular patient factor is associated with a good response.

A Voice for the Disease