For one woman with a BRCA gene mutation, information and teamwork brings a sense of control.
BY SHANNON PULASKI
PUBLISHED February 27, 2019
My head started spinning as I left my genetic coun­selor’s office. There was just one word from that session that rang in my ears: positive.

Earlier that morning, I had been certain that the day would play out differently. After all, the odds were in my favor. How could three of my female relatives and I all draw losing tickets from this genetic lottery? I wasn’t nervous heading to the genetic counselor.

The office was tiny. The waiting room could only fit a couple of people. When my genetic counselor, Justin, called my name, I was relieved to get the show on the road. My 4-month-old twin daughters were home with my mother-in-law, and I was anxious to get back to them. It had been about two hours since I pumped, and I was acutely aware of my breasts. They felt like they might explode. How ironic. Justin was as serious as ever and was clearly uncomfortable with the small talk I was forcing. For a few moments he said nothing at all, and I felt my stomach leap. He slid a piece of paper toward me and began speaking. I did not hear a single word. All I could see were the words in capital letters screaming in my face: positive for a deleterious mutation.

I knew exactly what that meant, but at the same time had no idea what was ahead of me. In that single moment, my whole world shifted. Everything was different. A clear division was drawn in the timeline of my life — the period before I knew I was BRCA-positive and the period after. It isn’t that I regret opting for genetic testing. For me, the idea of not knowing was out of the question. But, when I first learned that I was BRCA-positive, it became all-consuming. I would remind myself that I was a perfectly healthy 27-year-old woman who did not have cancer. But I could not help but conduct breast self-exams at least three times a day. Any twinge of pain and I’d be off googling “cancer.” I was obsessed with the thought that I was going to get cancer, that I was going to leave my girls without a mother, and worst of all, that I may have passed on this gene mutation to them. Everything felt out of my control.

I began to read, absorb and devour any information I could find about the mutation. I ended up reaching out to my genetic counselor again to sit down and hear all the things he’d tried to tell me the day I received the news. We reviewed statistics and discussed all the information I had been reading. He helped me make sense of it, and he connected me with resources like Bright Pink, a nonprofit advocacy organization focused on early detection and prevention of breast and ovarian cancers. Bright Pink became and remains a tremendous resource for support in my life. I met with a lot of doctors and learned about all of my options. With each discussion, the dark fog that consumed me began to lift, and I started to feel like I was on a team. And my team had a clear, decisive strategy for offense on how to beat this gene. Perceiving that I had taken back some control allowed me to feel like I could breathe again. Once that happened, I felt like I could live again.

It has been several years since that day at my genetic counselor’s office. Looking back, I can see that so many of the things that I feared and felt were insurmountable are now my victories. As I look forward, I can see many more challenges that this gene mutation will force me to face. With each, I remind myself of my personal mantra: Learn as much as you can; control as much as you can; then, let go and breathe as much as you can. Being BRCA-positive can be really over­whelming at times, but having knowledge and a really great team can show you that you have options, which allows you to take control of your health, be proactive and feel empowered. 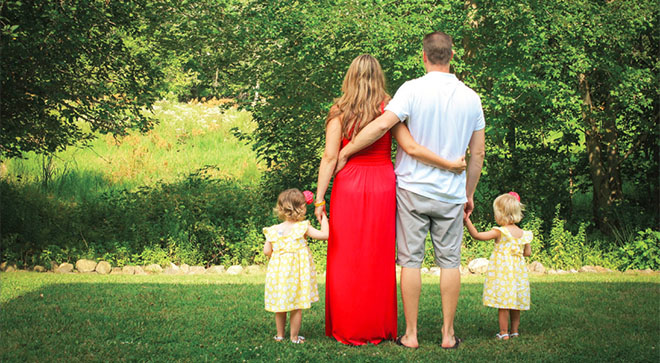 SHANNON PULASKI, her husband, MATT, and their daughters stand together in 2013.

SHANNON PULASKI is an attorney, avid patient advocate, wife and mother of three. She volunteers as an ambassador for Bright Pink, a nonprofit advocacy organization focused on early detection and prevention of breast and ovarian cancers, and serves on the Young Leadership Council for the Basser Center for BRCA at Penn Medicine’s Abramson Cancer Center in Philadelphia. Pulaski is the author of “Mom’s Genes,” a book that aims to empower children to learn their family health histories. “Mom’s Genes” is available on Amazon in print and as an e-book. Learn more about Pulaski’s story at proactivegenes.com.
Be the first to discuss this article on CURE's forum. >>
Talk about this article with other patients, caregivers, and advocates in the Breast Cancer CURE discussion group.