Soon after the 9/11 terrorist attacks, Judy Meyers returned to work in Manhattan, despite the terrible air quality. Years later, she was diagnosed with lung cancer, which is directly related to being in New York City in the aftermath of the destruction of the Twin Towers.

Before listening to this podcast, please note that it contains a personal account of 9/11 terrorist attacks in New York City that may be unsettling or triggering. Listener discretion is advised.

On Sept. 11, 2001, Judy Meyers was on a train into New York City where she worked as a commercial real estate paralegal. While the day started like many others, the terrorist attacks on the World Trade Center made that fateful Tuesday one of the deadliest days in American history.

While Meyers was able to miss being at the site of the attacks – which she credited to luck and timing – she was soon back at work in lower Manhattan, breathing in air that she said smelled horrible but was reportedly safe. Years later in 2019, she was diagnosed with stage 3b non-small cell adenocarcinoma that was linked to her exposure following the 9/11 attacks.

In this special edition episode of the “CURE® Talks Cancer” podcast, Meyers shares her story. 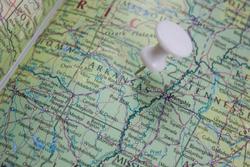 Some Areas Lag Behind in Decreasing Lung Cancer Death Rates

The Devastating Experience of Finding Out Your Child Has a Rare Cancer: Part 2