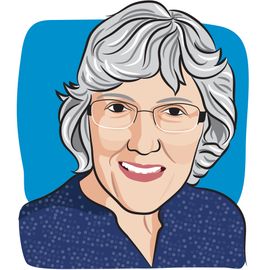 Kelly Irvin is a multi-published novelist and former newspaper reporter who worked in public relations for more than 20 years. She retired from her day job in 2016 after being diagnosed with primary lateral sclerosis, a degenerative motor neuron disease, and stage 4 ovarian cancer. She spends her days writing and loving her family.

Believe me, if I thought a baking soda solution would cure my cancer, I’d be first in line. It’s cheap and it won’t make my hair fall out, make me vomit or send my white blood count spiraling down.

Sometimes my life as a cancer patient intersects oddly with my work as the author of Amish inspirational romances. Recently, I came across an article about an Amish man who was sentenced to six years in prison on charges relating to the manufacture and sale of herbal products, with labels that included language such as “cures cancer” and “very good at removing tumors.” There was no evidence that either statement was true. Some people argued that Kentucky farmer Samuel Girod was unfairly punished because his herbs were not drugs and that he suffered selective prosecutive based on his religion. I don’t know enough about his case to discuss the merits of those arguments, but I can view the situation through the lens of a cancer patient who knows the irreparable harm false claims about cancer cures can do.

Unfortunately, charlatans take advantage of our fears. The internet barrages us daily with so-called holistic and “simple” cures for this disease. Diets and herbs and coffee enemas and ear candling. Wikipedia has an enormous list of unproven and disproven cancer treatments. It boggles the mind: Vitamin C, baking soda, chelation therapy, cell therapy, shark cartilage, colon cleansing (the enemas), kombucha (fermented tea), milk thistle, goldenseal. Over and over, venerable institutions such as the Mayo Clinic, the American Cancer Society and Dana-Farber Cancer Institute reiterate that no foundation has been laid for the claims made.

Worse, some of the treatments touted can be toxic — even lethal.

Giving people false hope, making them sicker and taking their money is the worst kind of chicanery.

This road we walk as cancer patients is difficult enough. We must not be taken in by false cheerleaders. The FDA recently sent out letters to 14 companies telling them to cease and desist making fraudulent claims on their websites. Here are some red flag warnings they say to look for when evaluating product claims:

Believe me, if I thought a baking soda solution would cure my cancer, I’d be first in line. It’s cheap and it won’t make my hair fall out, make me vomit or send my white blood count spiraling down. Does anybody really believe medical institutions are hiding the cure for cancer so they can make money from our misery? Do we truly believe the cure for a disease as wickedly intricate and conniving as cancer that mutates constantly to avoid being eradicated can be cured by simply not eating carbs?

If it sounds too good to be true, it is. That sucks. But it’s a universal truth with which we must live. To the snake oil salesmen out there, grow a conscience, please. It’s wrong. It’s sick. It’s immoral. It can lead desperate people away from treatments that really do prolong their lives and mitigate their pain.

Another insidious side effect of this search for a cure is that it sometimes pits us against each other. Recently, an ugly spat developed in the Facebook group I belong to for ovarian cancer patients. One member vented that she felt as if those members who choose certain types of treatments were “holier than thou” about their choices and “looking down their noses” at those of us who choose traditional treatment.

Her comments sparked an acrimonious exchange among various women—all cancer fighters, all with the same disease, all desperate for a cure. We tend to think the way we choose is best. It reminds me of the divide between women who breastfeed and those who don’t, or moms who homeschool and those who don’t. There’s that sneaking sense of superiority that seeps through in our exchanges. It divides us at a time when we need each other. When we need to stand together. We have so much more in common than that which divides us.

We’re all on the same side. We all want the same thing. Let’s not beat each other up. We need each other. We need support for whatever route we choose. We don’t have the energy for bickering. Save that energy for the big fight—beating cancer.

I don’t know if Kentucky farmer Sam Girod, father of 12, grandfather of 25, deserves to be in prison for making unsubstantiated claims about his products. But I do know that false claims about cancer cures do irreparable harm. We must not fall for them. When we do, we give cancer an advantage none of us can afford.