Despite the incidence of breast cancer either holding steady or decreasing in other U.S. racial/ethnic groups, it has been increasing in Asian-American women for the past 25 years.

Asian-Americans comprise populations from 30 countries, which all have differing migration patterns, socioeconomic status, health behaviors and culture. Each of these characteristics contributes differences in disease incidence. This study is the first to examine subtype-specific incidence patterns in Asian-American ethnicities.

To understand the increase in breast cancer incidence, researchers at CPIC studied the cancer trends by age and stage among women from seven Asian-American ethnic groups in California, between 1988 and 2013. Those ethnicities were Chinese, Japanese, Korean, Filipino, Vietnamese, South Asians (Asian Indians and Pakistanis) and Southeast Asians (Cambodians, Laotians, Hmong and Thai). Using the California Cancer Registry, which is the largest in the U.S. and has the most substantial population of Asian-Americans, the researchers found 548,259 new cases of invasive breast cancer. Of those cases, 383,478 were non-Hispanic white women and 45,721 were Asian-American women.

Also, while all ethnic/racial groups had the lowest rates for the HR negative/HER positive subtype, those rates were 20 percent higher in Asian-American women than non-Hispanic white women.

The study also noted, “During the time period 2009 to 2013, overall incidence rates were statistically significantly lower among Asian-American women than non-Hispanic white women.”

Authors also suggest a need for higher rates of mammography screening in these populations, due to the increasing trends of late stage disease, and better understanding of the rates of certain subtypes. 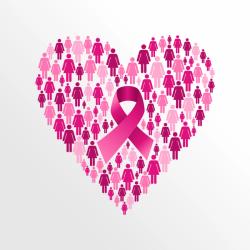