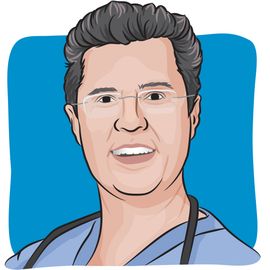 Rick Boulay, M.D., is a board-certified gynecologic oncologist. When cancer faced his family and his medical training left him ill-prepared to manage the day-to-day needs of cancer treatment and survivorship, he found wisdom, support and love in the patients he treated. As a result, Dr. Boulay, who is also a singer, now writes and performs on topics at the intersection of cancer and society.

What if there were some way to identify gene mutations causing the cell to behave as a cancer and then, with a medication, undo the effects of the errant gene? This is the basis of personalized medicine.

Personalized medicine (also termed “precision medicine”) is the tailoring of medical treatment to the individual characteristics of each patient.

Traditionally, cancer treatment progressed along the predictable pathways of surgery, radiation and chemotherapy, prompting my more emboldened patients to quip, “If you can’t cut it out, then burn it out. If neither of those work, then poison it.”

Although the oncologist in me gasps at these language choices, the humanist in me concedes its wisdom. After all, my five-hour commitment to either a surgical procedure or chemotherapy administration generally requires several weeks of medical care to manage the damage I’ve created. That is to say, in an effort to stomp each and every cancerous cell, my interventions initially leave folks worse off than when we first met. My tools are indiscriminant. They not only kill and injure cancer cells, but they harm the good ones too. It’s kind of a scorched earth policy. And to quote Dr. Susan Love, “Cancer treatment leaves collateral damage.” But cancer is cancer. And we need to be aggressive with an aggressive disease. Everybody wants to fight it.

Lets stop right there. These three statements are not generalizable truths. And the more we scientifically probe them, the more falsehoods we uncover.

All cancers are not the same. A cancer, by definition, has the capability to invade nearby normal tissue and spread, or metastasize, to distant organs, like lymph nodes, the liver or the lungs. But not all cancers behave like well-trained warriors, establishing a beachhead and poisoning the local drinking water. Some simply act as bad neighbors, hosting a noisy party well into the evening. Annoying, but not lethal. What accounts for the differences in behavior? Most cancers act in accordance with the DNA mutations, or the genetic changes, which accumulate within them.

Since sequencing the human genome in the year 2000, we now know that every human being inherits about 30,000 genes from each of his or her parents. These genes govern the way our bodies look and function: eye, hair and skin color, height, weight and proclivity toward certain diseases like high blood pressure, diabetes and cancer.

But every gene passed along by our parents isn’t always perfect. Just as your mom can pass along her brilliant sapphire eyes or curly red locks, she may also inadvertently donate her mutant BRCA1 gene with its 85 percent lifetime risk of breast cancer and a 42 percent lifetime risk of ovarian cancer. These are called “germline mutations,” and unfortunately, she does not get to choose which one you get. Additionally, even the perfect genes we are born with, can go bad, and become cancerous. These are called “somatic mutations.” Environmental exposures to a myriad of toxic agents can result in cancer development over time. For instance, the ultraviolet (UV) rays in sunlight damage skin cell DNA causing skin cancers including melanoma. Viral infections like Hepatitis B and C disrupt liver cell function and can result in liver cancer. Toxic chemicals called carcinogens found in everyday substances like cigarette smoke or alcohol or chemical cleaners change the DNA in the cells they poison. Surprise. They also can cause cancer. Even medications, like the hormones prescribed for menopausal symptoms cause breast and uterine cancers. And perhaps the most unkindliest cut of all, cancer treatments including radiation and some chemotherapeutics can ironically cause new cancers.

Just as the genetic injuries occur in many different ways, the resultant gene alterations manifest in many of the 30,000 genes we possess. And though our bodies can correct many of them, the mutations leading to cancer development generally affect genes regulating the machinery that controls cell growth by permanently turning these cells “on.” These cells then grow unchecked, compromising the orderliness of the neighborhood, disrupting the functioning of nearby organs and spreading unchecked across the body. Furthermore, these new mutations also make the affected cells a setup for further genetic errors making the cancerous cells even more aggressive. And finally cells, normally programmed to die off over time, lose that ability, making them immortal. They just keep on growing.

But what if there were some way to identify gene mutations causing the cell to behave as a cancer and then, with a medication, undo the effects of the errant gene? This is the basis of personalized medicine. Rather than killing each and every cancer cell (and occasionally the host), what if we could simply persuade them to behave? To act neighborly. To grow as necessary, function as intended, and die off when damaged. And never, ever trespass on territory that isn’t their own. In short, coax them to behave like normal cells.

Over the past few decades, scientists have identified many laboratory techniques that do just that: find evidence of the gene abnormalities which allow cancers cells to behave badly. Once the abnormal genes are identified, newer treatments can be invented to exploit these discoveries and treat the resultant cancer, rendering the cancerous cells harmless. Some, such as estrogen and progesterone receptors (ER/PR) in breast cancer have been utilized for years. Others, such as the Philadelphia chromosome in chronic myelogenous leukemia (CML), have been known for decades, but have only recently been made “actionable” (treatable with newer medications). While still others, like PD-1 and PD-L1 expressions, define effectivity of the exciting new immuno-oncology medications. Each month, in the medical journals delivered to my office articles on the recently elucidated mutant genes, their molecular pathways, and the newly developed medications to control them fill my required reading list. The excitement and hope generated from new treatment options with higher cancer control rates are, quite frankly, somewhat quenched by the realization that the medicine I have practiced to-date will need to be completely relearned. That is, of course, a small price to pay for the cancer control benefits of this era of the “Rapid Renaissance” in oncology. (i.e. “Locking yourself in a library a few times a year won’t kill you, Doctor. Not doing so may kill me.”)

But I think there is more to be said of personalized medicine. Genes and mutations and novel drugs mean nothing if inappropriately used. In fact, they can and will cause harm. In my mind, the most important caveat to personalized medicine is the one least often discussed: “How do you, as a cancer patient, desire to live out your days?”

This seemingly simple question quickly leads to others, more difficult, that will guide your consent to various treatments offered. Are the hardships of cancer treatment tolerable to you? Or would you just plain rather not, no matter what happens. What if available treatments can’t cure you but can control your cancer for some time? Five years? Or perhaps five months? Or five weeks? What if curing your cancer ruined something precious to you? Your hearing? Your vision? Your ability to walk? What if this little pill could control your cancer forever, and it didn’t make you sick, but it cost $150,000 per year? And what if insurance only covered a portion of it? What if it didn’t cover it at all?

These are the questions of personalized medicine. Getting to your values. Your goals. Getting to the heart of what is important and meaningful to you.