Changing the Face of Lung Cancer

Philippa Cheetham, MD: Welcome back to CURE Connections®. We are talking, today, about lung cancer. In this segment, we are focusing on education and support. We are really fortunate to have with us Chris Draft, who may be best known to many of you as a linebacker in the National Football League. What you may not realize is that for more than a decade, Chris has also used his celebrity status to raise awareness about lung cancer. Chris’s wife, Keasha, an otherwise healthy nonsmoker, died of lung cancer in 2011 at the age of 38.

Also with us in the studio today is Carly Ornstein of the American Lung Association and Dr. Leora Horn from Vanderbilt University. Welcome back to CURE Connections®. Chris, we’re going to be hearing a lot more about your personal story with lung cancer in our later segments, but tell us why you think that the whole situation regarding lung cancer and awareness needs to change?

Chris Draft: Why does awareness need to change? For the last 40 years plus, the only thing that people have seen is a prevention campaign. Our survivors or our other advocates ask, “Well, what do we have to do? How do we change the face of lung cancer? How do we make people care about lung cancer?” The key is to position it where people can care. So, the prevention campaign is really a personal responsibility campaign. It’s saying, “It’s all about you.” It’s saying, “If you can change, then we can deal with lung cancer.” But cancer is compassion and there are things that you can’t do. That’s why we need help. That’s when you hear somebody say, “We need your help to fight for a cure.” And so, we’re changing the face of lung cancer.

What we’re doing is we’re acknowledging that prevention is good. Prevention is ideal, but it’s not enough. I found that out with my wife. She was 37 years old when she was diagnosed, and she passed away a year later, when she was 38. She was in amazing shape. We found out that anyone can get it, right? Well, if anyone can get it, such as someone who has never smoked or someone who’s in amazing shape, then it’s not good enough to just say that prevention is all you can do. That means that the full cancer game plan is prevention, early detection, treatment, research, and survivorship.

Philippa Cheetham, MD: Now, many of the people you’re talking to—you’re preaching to the converted. They’re in the lung cancer field, they’re working with patients, they may have already been diagnosed, or they’re in high-risk categories. But for the average Joe guy on the streets who doesn’t really know anybody with lung cancer, or hasn’t been exposed to it, what are some of the misconceptions about the disease?

Chris Draft: It’s not just the people that already know. The people that already know are saying, “Well, why don’t people know more about lung cancer?” And that’s because it’s only been a prevention campaign. And so, it’s both groups. We have to make sure that we educate people better. How would they know? I tell folks all the time, I didn’t wake up in the morning like, “Whoa, I know about lung cancer.” It was through a personal connection with my wife. And so, unless we’re making it clear to people, and unless we’re educating them that anyone can get it, then we can’t be surprised when they don’t know about it.

Philippa Cheetham, MD: The other side to the coin is that we know that many patients who get lung cancer tend to be older, sicker. There’s a stereotype for all cancers about the kind of typical patient, and your wife clearly was not in that category. For many people who hear about lung cancer, they know what they know (which is very limited) from years ago—that many patients with lung cancer present late in the disease. The options for cure were not often even there. But we’ve heard already, from Dr. Horn, that we’ve come a long way. And we have even further to go with newer imaging, newer molecular testing, and newer treatments. Do you think the fact that we have come so far has caused a problem in which people just don’t realize where we are today versus where we were 20 years ago?

Philippa Cheetham, MD: Now, just to be devil’s advocate, we’re talking about lung cancer today, but this situation applies to any cancer. We know that many patients who get certain types of cancers have risk factors. Could we not apply this message to anybody with any cancer? “Look, these are the typical patients that get it, but you need to be aware.” And if that’s the case, does that not dilute the message that we’re sending the same message to all cancers? “Look, you’re not in a high-risk group, but you can get it.” So, how do you get your message across to the patient who doesn’t have risk factors (who doesn’t smoke, who’s not old, who has no reason to have that red flag)?

Chris Draft: Well, if I had my phone, I’d show you a picture of my wife. In November of 2010, I was not worrying about it. There was a survivor that I spoke to, and she actually knew about one of the nonprofit organizations. She knew one of them but had not really been engaged with them. A couple years later, she becomes diagnosed with lung cancer. I’m not saying that you’re actually going to get it. I’m saying that there’s a possibility that you can get it. Are the numbers low? Yes, those numbers are low. But it’s still possible. And so, this is something that you put on your radar. I’m not telling you it’s something you need to worry about, but I’m saying, “It is real and it’s here.” And, “There are things that you can do in supporting it to make sure that if it does happen to you, that your outcomes will be better in the future.”

Philippa Cheetham, MD: Through your education, your awareness, and your advocacy, you’re delivering many messages to many people. What are the top three messages that you’re trying to drive home—that have the biggest impact when you’re talking to somebody one-on-one and you say, “Listen to me. This is a message that I want to get home to you”?

Chris Draft: Well, the most important thing is, anyone can get lung cancer. Anyone. Unfortunately, I know that too well because my wife was in amazing shape when she was diagnosed at 37 years old. So, anyone can get it. The other one is that prevention is not enough. Prevention is great, absolutely. But it’s not enough. We need early detection, treatment, research, and survivorship. And the other thing is, we’re all going to pass away at some time. I don’t want you to be scared of it, that it’s going to happen. But the fact that cancer can come into your life—let that remind you to continue to live and be in the moment every day.

Honoring an Oncology Nurse Who Radiates Positive Energy Despite any Adversities 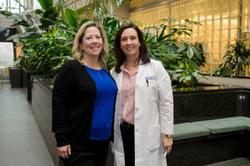