Richard Finn, of the Jonsson Comprehensive Cancer Center at UCLA and lead investigator of the PALOMA-1 study, explains the clinical implications of Ibrance's approval for hormone-positive, HER2-negative metastatic breast cancer.

Earlier this month, Ibrance (palbociclib) was granted an accelerated approval as a frontline treatment for postmenopausal women with hormone-positive, HER2-negative metastatic breast cancer.

The drug was approved based on results from the phase 2 PALOMA-1 trial, which showed a remarkable increase in progression-free survival (PFS) with Ibrance and letrozole compared with letrozole alone. Ibrance, which previously received breakthrough therapy designation, is the first CDK4/6 inhibitor made available for any indication.

For further insight on the significance of Ibrance’s approval, Richard Finn, of the Jonsson Comprehensive Cancer Center at UCLA and lead investigator of the PALOMA-1 study, put the approval in context.

CURE: What makes Ibrance such a groundbreaking treatment for advanced breast cancer and what was the basis for the Food and Drug Administration’s (FDA) approval?

Richard Finn: Palbociclib is the first cyclin-dependent kinase 4/ 6 (CDK4/6) inhibitor approved by the FDA for any indication. The current indication is for first-line treatment of advanced postmenopausal, ER-positive, HER2-negative breast cancer. This approval is based on a strong preclinical and clinical data set that suggests that CDK4/6 inhibition is important in this subtype of breast cancer.

It is based on laboratory data initially done by Dr. Dennis Slamon and myself and the team here at UCLA in collaboration with Pfizer, which identified that ER-positive, HER2-negative models seem sensitive to CDK 4/6 inhibition. In addition, we demonstrated preclinically that there was synergistic inhibition of growth when combined with antiestrogen.

With this in mind, we designed a global, open-label randomized phase 2 study comparing palbociclib and letrozole with letrozole alone. And it is the result of this phase 2 study that really demonstrated a significant improvement in PFS. In the study, about 165 women were randomized between the two arms and those who received letrozole alone had a PFS of about 10 months, and those who received palbociclib had a PFS of about 20 months. So that’s a hazard ratio of 1.49 or a 51 percent decrease in the risk of progression. So, it’s really this striking improvement in PFS that garnered palbociclib a breakthrough therapy designation and then expedited approval for this indication.

Were you expecting those results or were you surprised by the drug’s success?

I think we were all pleasantly surprised by the magnitude of benefit that we saw with palbociclib and letrozole. The preclinical data were very striking to us, but as we all know, preclinical data don’t always lead to improvements in patients in the clinic. But this significant improvement of over 10 months, essentially doubling the PFS, I cannot say was expected. We are all very happy and pleased that the FDA made this agent available to patients as soon as possible, and we are really struck that this was such a positive study.

What do you think will be the biggest impact of palbociclib being approved so quickly for this patient population?

Palbociclib and letrozole are now a good option for women with advanced post-menopausal, ER-positive, HER2-negative breast cancer. This is a large indication; ER-positive breast cancer makes up about 60 positive of breast cancer, and antiestrogens have been a standard first-line approach for these women. Now with the addition of palbociclib, given the magnitude of benefit and the safety profile, I think this is a very good option with this indication.

There are ongoing studies of palbociclib with other antiestrogens specifically the PALOMA-3 study with fulvestrant and palbociclib or fulvestrant alone for women with AI (aromatase inhibitor)-refractory disease. But right now, as it stands, with the expedited approval, this is a very good frontline option for women with ER-positive breast cancer.

Do you anticipate other similar drugs coming down the pipeline or other indications being approved for Ibrance?

This is the first approved CDK4/6 inhibitor. I think given that CDK biology has been known for several decades, now this is an important step forward because it has validated the target as a valid therapeutic target in cancer medicine. CDK inhibitors have been around in the past, but they never really advanced very far in the clinic because of toxicity and lack of activity. What has been delivered now is proof of concept that a CDK4/6 inhibitor can play a role in treating human cancer. I think this first indication is just that, a first indication.

I have a lot of confidence that in other areas of breast cancer and other lines of therapy that drugs like palbociclib will play a role. Hopefully, now that CDK4/6 inhibition has found a first step, there will be a role in other malignancies.

But I think what is critical to the successful development of palbociclib or other CDK4/6 inhibitors is identifying which patients are likely to respond. The preclinical work done really set the stage for the successful phase 2 study that we saw. I think similar types of programs and clinical trial strategies will need to be used as this drug moves into other indications. We do know that there are other CDK4/6 inhibitors in development—specifically, Eli Lilly and Novartis have CDK4/6 inhibitors—and many of them are going after the same indication in combination with letrozole, as well as other indications. But ultimately, identifying the patients who are most likely to benefit will be the most the important next step.

What are the biggest advantages Ibrance offers over other treatments?

I think the largest advantage we see right now with the addition of palbociclib to standard endocrine therapy is the efficacy. To see an improvement in PFS of over 10 months is really striking. I have not seen that often in cancer medicine—in breast cancer or any other disease. If you look at the frontline treatment of ER-positive breast cancer, really there have not been any new agents shown to be effective other than antiestrogen agents. Everolimus is approved in later line therapy, but in this first-line indication, palbociclib is the first new agent for these women.

This significant efficacy is balanced by a side-effect profile that is fairly manageable. The most common side effect we’ve seen is neutropenia and leukopenia, and the package label has guidelines for managing that. In general, palbociclib is given on a 3-weeks-on, 1-week-off regimen and that 1-week off is to allow for recovery of the bone marrow. The bone marrow suppression seen with palbociclib appears to be different than that seen with cytotoxics or chemotherapy drugs in that the recovery appears to be fairly quick, the length of the neutropenia is fairly brief, and we do not see a significant incidence of neutropenic fever. That is the biggest advantage when compared with cytotoxics or chemotherapy.

Where does the palbociclib and letrozole combination fit into the treatment paradigm?

I think palbociclib and letrozole are a very good option for the type of women studied in the PALOMA-1 study, and that is postmenopausal women who are ER-positive, HER2-negative with a first diagnosis of metastatic disease. Many women in the study had prior antiestrogen treatment in the adjuvant setting, but they had not received antiestrogens or any other treatment in the frontline setting. And for that population, this looks to be a very good frontline option. In addition, there were women in the study who had never had treatment for early breast cancer, and all of those patients received a significant benefit from palbociclib as far as an improvement in PFS.

Do you think palbociclib will become the new standard of care for those women with ER-positive, HER2-negative metastatic breast cancer?

I think still there are several options for women with advanced ER-positive breast cancer. But based on the expedited approval, this is an option with very strong efficacy data. The study randomized 165 patients, so some people might want to wait for a confirmatory study, which is ongoing, has completed accrual, and the results are awaited. That is the PALOMA-2 study, which is a large, double-blind, placebo-controlled study. But I think the FDA is interested in getting promising new drugs to patients as soon as possible and that is why we saw the expedited approval of palbociclib. 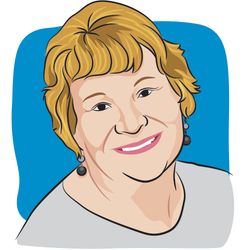