A new drug, GSK2857916, was granted a breakthrough therapy designation by the FDA to treat patients who have relapsed or refractory multiple myeloma, according to GlaxoSmithKline (GSK), the manufacturer of the agent.

A new drug, GSK2857916, was granted a breakthrough therapy designation by the FDA to treat patients who have relapsed or refractory multiple myeloma, according to GlaxoSmithKline (GSK), the manufacturer of the agent.

GSK2857916, a B-cell maturation antigen (BCMA) antibody-drug conjugate, is indicated for patients who have failed at least three prior lines of therapy, including an anti-CD38 antibody, and who are also refractory to a proteasome inhibitor and an immunomodulatory agent.

GSK also noted in a press release that the European Medicines Agency (EMA) granted PRIME designation to GSK2857916 in October for the treatment of patients with relapsed and refractory multiple myeloma whose prior therapy included a proteasome inhibitor, an immunomodulatory agent and an anti-CD38 antibody.

The breakthrough and PRIME designations will expedite the development and review of GSK2857916 in the United States and European Union, respectively.

“Oncology R&D at GSK is focused on developing medicines with transformational potential for patients and we are pleased that our investigational antibody-drug conjugate is the first BCMA targeting agent to receive breakthrough therapy and PRIME designation,” Axel Hoos, M.D., Ph.D., senior vice-president, Oncology R&D, said in a statement.

“GSK plans to rapidly advance clinical trials with this promising therapy, alone and in combination with other therapies, to further investigate how GSK2857916 could benefit patients with multiple myeloma. The monotherapy data that we have seen for GSK2857916 support its transformational potential and we look forward to working with regulators as we progress the development program,” added Hoos.

The breakthrough designation is based on results from a phase 1 open-label, dose escalation and expansion study in patients with relapsed/refractory multiple myeloma, irrespective of BCMA expression. Data from this ongoing trial are scheduled to be presented in December at the 2017 American Society of Hematology (ASH) Annual Meeting

Grade 3/4 AEs reported in at least 10 percent of patients included thrombocytopenia, anemia and neutropenia. There were eight serious AEs reported among six patients, with one incidence of unresolved limbal stem cell dysfunction that was considered drug related.

There were no AEs leading to treatment discontinuation. Four patients required dose reduction due to AEs, one each of ocular toxicity, corneal disorder/ocular toxicity, dry eyes and keratitis (corneal inflammation). Across all dose levels, seven patients (29 percent) experienced IRRs, all of which were grade 1 or 2 and occurred during the first dose administration. The most frequent symptoms were chills.

Investigators did not observe any dose-limiting toxicities. One patient completed 16 cycles of scheduled treatment and eight patients were ongoing at the time of the analysis. Fourteen patients discontinued treatment due to disease progression.

The EMA and FDA have both designated GSK2857916 as an orphan drug for multiple myeloma. 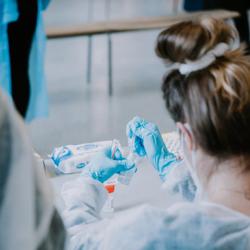