From today’s top performers to the latest in scientific research, here’s what is making headlines in the cancer space this week.

In an interview with PEOPLE, "Jeopardy!" Host Alex Trebek reported he is in “near remission” from his stage 4 pancreatic cancer diagnosis. “It’s kind of mind-boggling,” Trebek told PEOPLE. “The doctors said they hadn’t seen this kind of positive result in their memory… some of the tumors have already shrunk by more than 50%.”

Trebek is clearly “beating the odds” as he announced only months ago that he received a diagnosis of cancer, and wished his current outcome could be a beacon of hope for patients with pancreatic cancer. The five-year relative survival rate for pancreatic cancer is approximately 50% and that number is significantly lower (about 3%) for stage 4 pancreatic cancer, according to the American Cancer Society.

The “Jeopardy!” host will continue with his current treatment plan and finish his remaining rounds of chemotherapy.

“I’ve got a couple million people out there who have expressed their good thoughts, their positive energy directed toward me and their prayers,” Trebek told PEOPLE. “I told the doctors, ‘this has to be more than just chemo,’ and they agreed it could very well be an important part of this.”

Daniel Wright, a seventh-season contestant on “The Biggest Loser” has passed away from leukemia at the age of 30. His battle with leukemia lasted for two years before he succumbed to the disease, reported the Daily Mail. Wright gained fame by losing weight at age 19 as a contestant on the reality show in 2009. Courtney Crozier, who appeared on season 11 of “The Biggest Loser,” confirmed Wright's passing and left a loving memorial on Facebook.

Wright received a diagnosis of leukemia in October 2017, when he was 28 years old. He relapsed about a year later and learned that he had developed a more aggressive form of cancer in December 2018. His wife Rebecca reported in a Facebook post just days ago that Wright was still struggling and fighting the disease.

Cancer survivor Devin Smeltzer, age 23, saw his dream come true and made his MLB debut with the Minnesota Twins on Tuesday. Doctors found a grapefruit-sized tumor in Smeltzer’s bladder when he was 9, reported The Philly Inquirer. His love of baseball was so great that he continued to play throughout his treatments, which doctors encouraged. He was declared cancer-free at age 16 and by then was playing for his high school.

His dream after defeating cancer was to become a major-league pitcher. During Tuesday’s game, Smeltzer allowed three hits, no walks and no runs, while striking out seven batters to help the Twins win against the Milwaukee Brewers 5-3.

“I am the person I am today because of what I went through,” he told the Daily News in 2016.

The hours you work do not affect your risk for breast cancer, reports a UK study that looked at whether working night shifts increase risk for cancer. The study analyzed 102,869 women over 10 years, reported The Guardian. The Breast Cancer Now Generations study is the latest to examine the supposed link presented by experts for decades.

“A possible link between exposure to electric light at night and an increased risk of breast cancer was first proposed more than 30 years ago, but research has so far been inconclusive,” said study co-author Michael Jones, staff scientist in genetics and epidemiology at the Institute of Cancer Research in London. “In our new study we found no overall link between women having done night shift work in the last 10 years and their risk of breast cancer, regardless of the different types of work they did involving night shifts, and the age at which they started such work.”

Tempus, a cancer technology startup based in Chicago by Groupon co-founder, Eric Lefkofsky, is now worth $3.1 billion, according to Forbes. The company gathers and analyzes clinical and molecular data related to cancer treatment and is creating a library of that information that will hopefully lead to more precise health care, reported Forbes. The company says it works with 70% of U.S. oncology centers, who use some of its data library. The company hopes to use its latest funding to expand beyond cancer and into areas such as depression and diabetes.

Lefkofsky founded the business when his wife, Liz, was diagnosed with breast cancer. “I found myself spending a bunch of time in the clinic and I was just perplexed at how little data was there for her care,” he told Forbes previously. Tempus added that Liz is presently “doing well and is taking it one day at a time.” 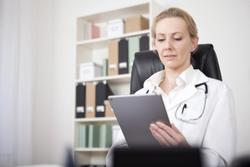