The drug has been approved to treat patients with advanced or metastatic RET-mutant medullary thyroid cancer and RET fusion-positive thyroid cancer.

The Food and Drug Administration (FDA) approved Gavreto (pralsetinib) for the treatment of adults and children aged 12 years and older with advanced or metastatic RET-mutant medullary thyroid cancer requiring systemic therapy, in addition to the treatment of RET fusion-positive thyroid cancer requiring systemic therapy and are sensitive to radioactive iodine.

The recommended dose of Gavreto is 400 mg orally once per day in adults and children ages 12 years and older, specifically with no food intake for at least two hours before taking the drug and at least one hour after taking it, according to a release from the FDA.

"Traditionally, we have treated patients with RET-altered thyroid cancers with multi-kinase inhibitors, non-selective therapies with modest efficacy and clinically significant side effects. The FDA approval of (Gavreto), a once-daily RET-targeted therapy, advances the standard of care for these patients,” said Dr. Mimi Hu, an investigator on the trial and a professor in the Department of Endocrine Neoplasia and Hormonal Disorders at The University of Texas MD Anderson Cancer Center, in a release issued by the drug’s manufacturer. “I am encouraged by the safety profile and durable responses shown by GAVRETO in RET-altered thyroid cancers in both treatment-naïve and previously treated patients.”

The most common adverse reactions, which occurred in at least 25% of patients, included hypertension (high blood pressure), constipation, musculoskeletal pain, fatigue and diarrhea, according to the release. The most common laboratory abnormalities considered grade 3 or 4 (severe or potentially life threatening), which occurred in at least 2% of patients, included decreases in neutrophils (a type of white blood cell), lymphocytes (white blood cells that serve as immune cells), phosphate, hemoglobin (a protein in red blood cells), sodium, calcium and platelets (a component that prevents bleeding), in addition to increases in aspartate aminotransferase (an enzyme found in several areas of the body), alkaline phosphate (an enzyme in the bone and liver) and alanine aminotransferase (an enzyme in the liver and kidney). 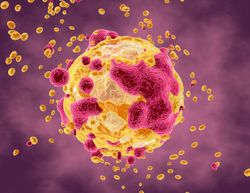 Thyroid Cancer Awareness Month: What You Need to Know

I Never Expected to Be the Caregiver with Cancer

Spring Into the Season With New Recipes