Make it A Double: My Decision to Go Flat After Breast Cancer 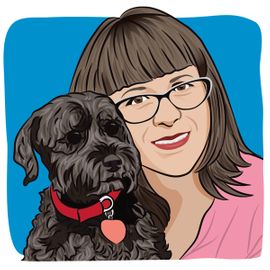 Marissa is a 40-something "flattie" in sunny SoCal living with metastatic breast cancer, her boyfriend (and high school sweetheart) and the memory of her not-so-mini schnauzer, Heidi, who was taken too soon by canine lymphoma. She enjoys reading, stress baking and roller skating. She hopes to inspire others with her stories about life with cancer.

There are women all over the world advocating for flat closure and starting nonprofits to put flat on the menu and make it a viable choice when it comes to mastectomy.

It was the summer of 2015. I turned 40 that summer and became a “flattie” just days after my milestone birthday. At that time, I was still fairly new to breast cancer and had no idea what to expect.

I met with the surgeon for the first time and I can still remember our conversation about my size and not having enough skin to reconstruct so he said he could use skin from other parts of my body. I am a smaller person and always have been. I had friends tell me I should gain weight. But gaining weight was not going to help anything; it wouldn’t create extra skin.

Turns out my oncologist was the one running the show, and not the surgeon. And because I was metastatic, he did not want me to have reconstruction. His concern was we wouldn’t be able to see my recurrences as well if I did get reconstructive surgery.

The surgical oncologist and the oncologist had come to an agreement, mastectomy without reconstruction.

For symmetry and the hopes that I wouldn’t have to go through any other surgeries, this was my choice.I had to do a little bit of letter writing and cajoling, but it was decided I could have a double mastectomy.I was unknowingly advocating for myself and learning to speak up. So, back to the surgeon to figure this all out.

I was a little nervous at first because the surgeon was younger than me and I didn't even know him. I told him (OK, more like pleaded with him), “Just make my scars flat, even and straight. Please just make it look nice.”

Little did I know at the time, there are surgeons out there who leave extra skin, called a skin sparing mastectomy, just in case. Imagine waking up like that. I’ve seen pictures and it’s not pretty. I was one of the lucky ones. My young surgeon did exactly as I asked, aesthetic flat closure, even before aesthetic flat closure was considered a reconstructive option.

Now, five years later, there are women all over the world advocating for flat closure and starting nonprofits to put flat on the menu and make it a viable choice when it comes to mastectomy. A few of these organizations are Flat Closure Now, Not Putting on a Shirt, Flat Retreat, Flatties Unite, and so many more.

Some of these women even hosted a ball, which I attended, and it happened to be the last normal event pre-COVID 19. These women make me proud to be a “flattie.” What an inspiring night that was to be surrounded by so many who had been through the going flat process and still look and feel beautiful.

If I had to do it all over again, I would still go flat, and make it a double.

Rage at the Sun