Many Newly Diagnosed Patients with Cancer Are Unaware of Hepatitis Infection

Researchers from across the country recommended for hepatitis infection screening in patients with cancer after the largest study of its kind discovered a high rate of these infections having gone undiagnosed.

The study, published in JAMA Oncology, examined the prevalence of hepatitis B (HBV), hepatitis C (HCV) and HIV among patients who were newly diagnosed with cancer. Researchers found that many patients didn’t know they had HBV or HCV, and they also had no identifiable risk factors for the infections, such as injection drug use or sexual contact with a high-risk person.

“It was significant the high proportion of patients with hepatitis B infection and hepatitis C infection who were unaware of their status at the time that they were newly diagnosed with cancer and our study highlighted the fact that without that screening they wouldn’t have known,” Scott D. Ramsey, M.D., Ph.D., director of the Hutchinson Institute for Cancer Outcomes Research at Fred Hutchinson Cancer Research Center in Seattle, said in an interview with CURE.

More than 3,000 patients from 18 academic and community institutions from Montana to Massachusetts were included in the study. Most had breast (34.7 percent), blood/marrow (12.1 percent), colorectal (11.9 percent) or lung (11.7 percent) cancer; however, patients with liver, head and neck and prostate cancer were also included in the patient population. The median age of patients was 60.6 years and most (60.4 percent) were women. The study also had a large representation of the minority population; 18.3 percent were Hispanic and 18.1 percent were African-American. A blood test was used to check for HBV, HCV and HIV.

It’s important for patients and their health care team to know if an active virus is present because it may affect treatment. For instance, HBV has been shown to have potential serious consequences in certain types of chemotherapy, Ramsey explained. “These viruses themselves can lead to serious consequences and death if not treated,” he said. “As a patient with cancer, if you’re working towards a cure or a long-term remission and you miss the opportunity to identify and successfully treat these viruses, it’s a shame to have that come up later in your life after you’ve been though an experience battling cancer.”

To move this research forward, Ramsey plans to see if his team can come up with algorithms to be used in doctors’ offices to recognize patients who are at highest risk and then to understand the cost-effectiveness for screening of HBV, HCV and HIV in the community practice setting.

“We believe our results warrant consideration of universal testing of patients with newly diagnosed cancer for HBV and HCV infection, particularly if such an approach is shown to be cost-effective,” the researchers wrote. 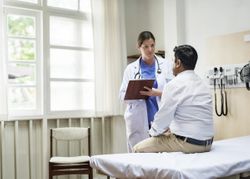 I Am a Strong Believer of Giving Patients with Cancer Hope