A Morning Oasis: Survivor Prioritizes a 'Feel-Good Moment' Each Day

Fitting at least one relaxing, positive moment into your schedule each day has the potential to improve your overall well-being, explains one cancer survivor.

Across from my apartment, there’s an inviting, quiet park that’s become my go-to morning spot this summer.

Being out there reminds me of a story I read during treatment about a man struggling with a brutal cancer diagnosis. Things weren’t going well and after enough time sulking in depression, he began waking up early to get outdoors and embrace the sunrise each morning — to get in at least one feel good, relaxing moment every day. The serenity relieved stress and rejuvenated his soul. His spirits improved, and eventually so did his condition.

I’m sure there were other factors leading to his recovery, but the image stuck with me. And I found his approach of letting go and embracing the peace to be inspiring; that was a vibe I could get behind, especially during times when I felt so tired and beaten down during my own fight.

I’ve been prioritizing time with nature ever since. Especially during these warmer months, I try to take advantage of the pristine early hours before rush hour traffic. As the sun rises and it’s just me alone with my thoughts — maybe a notepad to jot a few down or headphones if I want to enjoy some tunes… Always coffee, because, well, that’s a non-negotiable with me. I breathe deep, preparing for the day ahead and appreciating the calm.

Ever since my own diagnosis, the years have brought so much stress and uncertainty that I’ve learned to cherish the quiet times, just being left alone. And just like those nights when I’ll wake up unexpectedly at 3 a.m. and can’t get back to sleep, all of life’s pressures and responsibilities feeling entirely suffocating… The best part about my early mornings at the park, my little morning oasis, is that kicking back under the trees and basking in the sun brings on the exact opposite feeling. Here, I’m completely at ease and anything feels achievable. 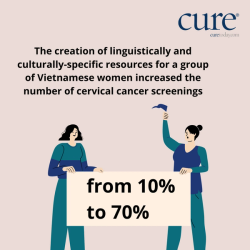