Caregivers of child and adolescent patients with advanced-stage Hodgkin lymphoma are vulnerable to productiv&shy;ity loss at work, according to phase 3 trial findings.

The participating caregivers, who were an average age of 43.8 and mostly women, were asked to complete the Caregiver Work Limitations Questionnaire and the Child Health Ratings Inventories- Global Health measure before the start of their children’s therapy.

Researchers explained that the ques&shy;tionnaire quantifies the percentage of time respondents had difficulty perform&shy;ing four key aspects of work because of caregiving: physical, mental-interperson&shy;al and output tasks and time manage&shy;ment. The 10-item inventory measures the child’s health-related quality of life (HRQL), based on the parent’s responses.

Nearly 300 parents completed the two sets of questions; of those, 159 reported working at a paying job and thus were eligible to complete the remainder of the study. All patients were newly diagnosed; most were boys with an average age of 15. The mean HRQL score was 65.2.

Based on the participants’ self-report&shy;ing, researchers determined that care&shy;giving disrupted work tasks at least 31.4 percent of the time. The average amount of disrupted time for mental-interper&shy;sonal tasks, output tasks and time man&shy;agement, as well as productivity loss, was higher in caregivers of children with HRQL scores in the lowest quartile com&shy;pared with caregivers of children with higher scores.

“High productivity losses noted at initial diagnosis indicate that financial hardship begins prior to the start of cancer treat&shy;ment,” the researchers wrote. 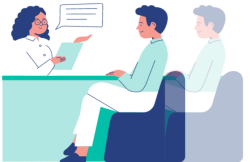