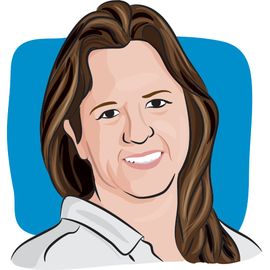 Tamera Anderson-Hanna is a Licensed Mental Health Counselor, Certified Addiction Professional, Certified Rehabilitation Counselor and became a Registered Yoga Teacher while coping with breast cancer in 2015. She owns Wellness, Therapy, & Yoga in Florida where she provides personal wellness services and coaching and she is a public speaker on wellness-related topics. You can connect with her at www.wellnesstherapyyoga.com.

With the beginning of the new school year approaching, some parents might be wondering how to manage cancer treatments and the demands of being a parent.

With the beginning of the new school year, some parents might be wondering how to manage cancer-related treatments and the demands of being a parent. I remember one of my biggest concerns when diagnosed with cancer was how to inform my children and keep life as normal as possible. Mind you, I keep a family calendar which could be compared to someone in charge of air traffic control, as there are often many events, social commitments and extracurricular activities for numerous members of the household. Being aware that I would be unable to drive at points in my recovery, I was very concerned about my ability to manage my typical responsibilities as a mother. Balancing life as a parent while having cancer and an uncertain future regarding time and treatments meant addressing one of my biggest weaknesses. I do not like asking for help. I pride myself, as most of us do, on being independent. The reality of not having family nearby to assist made needing support initially more complicated, but the reality of actually addressing the topic openly turned out to be a positive.

Demands included the normal routine of homework, sports related events, practices, school functions, music lessons, and other extracurricular hobbies outside of school along with everyday household tasks for which I would potentially be unable to help with. Having children close to and older than age 12 helped a bit, as they were asked which activities were more important to them and some commitments were eliminated or reduced due to time and demands that would be unrealistic. The value came in communication and teaching my children about making choices based on priority and necessity as sometimes in life adjustments and compromises need to occur. With a feeling of much gratitude, I found many of their daily activities continued due to the generosity of others who gave their support in the form of offering their time.

I found many parents, teachers and leaders to be understanding. Other parents offered to help when it came to picking up one of my children for a meeting or practice and to bring them home if needed. Getting out of the house helped my children maintain a sense of normalcy, but it also gave them a positive way to relieve stress. It also seemed to become a mission for some of the soccer teams to take on the idea of support, and it was no surprise when my son’s team made a choice to wear pink when they happily advanced to their national tournament. Their AYSO soccer league also sent little gestures of support by sending edible flowers and positive messages during the journey when I was unable to attend a major tournament.

A cancer diagnosis is fearful, inconvenient and scary for even outsiders to discuss. My diagnosis, like it or not, was reality. I tried to make the diagnosis something that was openly talked about and not forbidden. In a way, the choice turned out to educate other parents and my children’s peers on the importance of community and the reality of life events. In my case, being open with my diagnosis prevented my children from feeling a sense of pity or extensive sadness as it turned the situation into something they could openly reply to. My daughter willingly donated 12 inches of her hair to a charity for children and a good friend of hers demonstrated caring and support by doing the same. The topic of cancer, which can be uncomfortable for others to talk about, became open, normal and routine.

While the house may not have been as organized at times, and the laundry may have piled up, the chores were divided and the important things were done. For a period, I was unable to lift and carry things, and I could not drive for nearly three months, but I could verbally guide my children on ways to accomplish a chore around the home. If I had to switch out the family budget for something less expensive, it was important to recognize that this was not going to last forever. I did, of course, keep my children updated on treatments, setbacks and progress that could be celebrated and new milestones could be met as a family and a community.

If someone said to my daughter, “I am so sorry your mom has cancer,” she often didn’t have a sense of fear or gloom, but rather gave a reply that maintained a sense of optimism. Looking back on what will soon be three years, I believe cancer has had a positive influence, as my children began taking steps to pursue careers in the medical field. One is now happily away at college and has likely found a sense of independence by embracing life experiences rather than finding pity or sorrow in events that cannot be changed. It has likely taught both that there are difficult choices, like addressing finances. Such experiences help to teach the value of independence and interdependence.

For anyone who might still be finding the topic or role difficult, I encourage you to reach out to resources such as your local Cancer Support Community, a mental health professional or peer group. Google programs and agencies that offer support for families facing cancer. Some supportive programs offer tool kits which offer options for discussing cancer with younger children and suggest activities for keeping them busy while attending to treatments. Don’t forget to be open to help and ask when needed. We often help others, so why not accept support in return?