PARP inhibitors like Rubraca and Lynparza continue to shape the treatment landscape of ovarian cancer.

Toward the end of 2016, Rubraca (rucaparib) gained approval from the Food and Drug Administration (FDA) as the second PARP inhibitor in the field of ovarian cancer to treat BRCA-positive advanced ovarian cancer who have received at least two prior lines of chemotherapy.

Rubraca followed the 2014 approval of Lynparza (olaparib) for the treatment of women with BRCA-positive advanced ovarian cancer following three or more prior lines of chemotherapy.

These agents were recently joined by the PARP inhibitor Zejula (niraparib), which was just approved in March for the maintenance treatment of adult patients with recurrent epithelial ovarian, fallopian tube, or primary peritoneal cancer, regardless of BRCA mutation status. This approval was based on the phase 3 NOVA trial, where Zejula reduced the risk of progression or death by 74 percent compared with placebo in patients with germline BRCA-positive, platinum-sensitive, recurrent ovarian cancer.

Shortly thereafter, Lynparza was granted a priority review as a maintenance therapy in ovarian cancer. In the phase 3 SOLO-2 trial, maintenance Lynparza showed a 70 percent reduction in the risk of progression or death versus placebo in patients with platinum-sensitive, relapsed, BRCA-mutant ovarian cancer.

“It is exciting in that there are now options for the patients, but also that more research is being done on ovarian cancer and more drugs are being approved,” said Ursula A. Matulonis, M.D., a senior author on the NOVA trial, and director, Gynecologic Oncology, Dana-Farber Cancer Institute, professor of Medicine, Harvard Medical School.

Agents with broader labels, such as Zejula, are a particularly meaningful advancement, adds Matulonis. Zejula — unlike Lynparza and Rubraca — does not require patients to have a BRCA mutation, allowing for a wider range of women to be treated.

Can you provide an overview of the data that led to the approval of Zejula?

In an interview with CURE, Matulonis discussed the latest regulatory advances with PARP inhibitors and their continued growth in the treatment of patients with ovarian cancer.This was data from a phase 3 trial that was published in The New England Journal of Medicine in late 2016 and was presented at EMSO in the fall of 2016. It was a randomized trial of 500 women with high-grade ovarian cancer who had recurrent cancer and were in receipt of platinum-based chemotherapy. Eligibility included many different things, but mainly, they had to be sensitive —meaning the cancer needed to be sensitive to the current platinum based chemotherapy, which would mean the patient was having a reduction in her CA125 and tumor burden. Often though, these patients had to have cancer that was sensitive to the previous platinum, called the penultimate platinum — so it was the second-to-last platinum. There is a theme here—all of these patients had to have platinum-sensitive cancers.

Zejula was approved with a broad label, not requiring a BRCA mutation. Do you think that signifies that it will be widely used?

Simply put, when the patients finished chemotherapy, they were then randomized to Zejula or placebo. Zejula was not added to chemotherapy, but was used more as a maintenance therapy, much like tamoxifen is used after initial breast cancer treatment.I do think that Zejula is going to be widely used because of the broad label. But, why is that significant? Because it broadens the applicability of a PARP inhibitor to non-BRCA cancers, allowing more women to be candidates for this trial—it broadens the patient population, as well. It also gives patients more choices about their treatment.

What led to the priority review of Lynparza in the maintenance setting?

This is exciting because ovarian cancer is unlike other cancers, where you read about FDA approvals nearly every week. This is really only the third drug that has been approved for ovarian cancer since 2006. That’s three drugs in 11 years.The SOLO2 trial was done as a second trial for Study 19. Study 19 was published in The New England Journal of Medicine a number of years ago, and was the first trial to show the benefit of a maintenance PARP inhibitor post platinum-based chemotherapy. At that point, in 2014, the decision to go for Lynparza maintenance in a BRCA-mutated group was made based upon that data.

If you follow PARP inhibitor history, you would have stumbled upon the Oncologic Drugs Advisory Committee (ODAC) meeting from 2014, where we presented the Lynparza data to the ODAC committee down at the FDA, and they voted it down. Then, the FDA made the decision based upon data from a certain trial published in the Journal of Clinical Oncology to kind of pick out Lynparza and use it as a treatment for women with germline BRCA cancer, but only in those who had received three or more prior lines of chemotherapy. The FDA essentially said that there needed to be a confirmatory phase 3 study [to approved maintenance Lynparza]. So, the confirmatory phase 3 trial was SOLO-2.

What is the significance of platinum sensitivity in this setting?

SOLO2 is kind of what we saw in Study 19—that there was a benefit of the PARP inhibitors in BRCA-mutated ovarian cancer. But SOLO2 specifically looked at patients whose cancers have an underlying BRCA mutation. How is that going to change things? I do not know, but I do know that it is good because it provides more options for patients.I think platinum sensitivity is a more subjective measurement. But, it is also a clinical characteristic of the tumor. You really distilled out a patient population whose cancers will be most sensitive to PARP inhibitors. High-grade cancers showing penultimate platinum sensitivity and then current platinum sensitivity. Those are the cancers that are going to have the most underlying defects in DNA repair, because of that characteristic of platinum sensitivity.

In the maintenance population, you are selecting the patients that are going to benefit most from a PARP inhibitor. When you think about the Lynparza and Rubraca labels, that is more treatment. And it has been pretty consistently shown that the response to a PARP inhibitor is higher in patients that have platinum sensitive cancers, as well as in cancers that have been less heavily pretreated. That has been true of Rubraca, Lynparza and veliparib.

I think the clinical significance of platinum sensitivity is that, at least in one label now, it is what you are basing your decision to use a PARP inhibitor on. Although, the underlying BRCA mutation of Lynparza and Rubraca is driving that label. 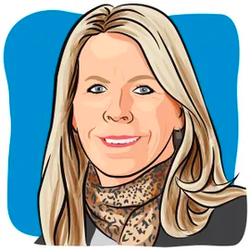