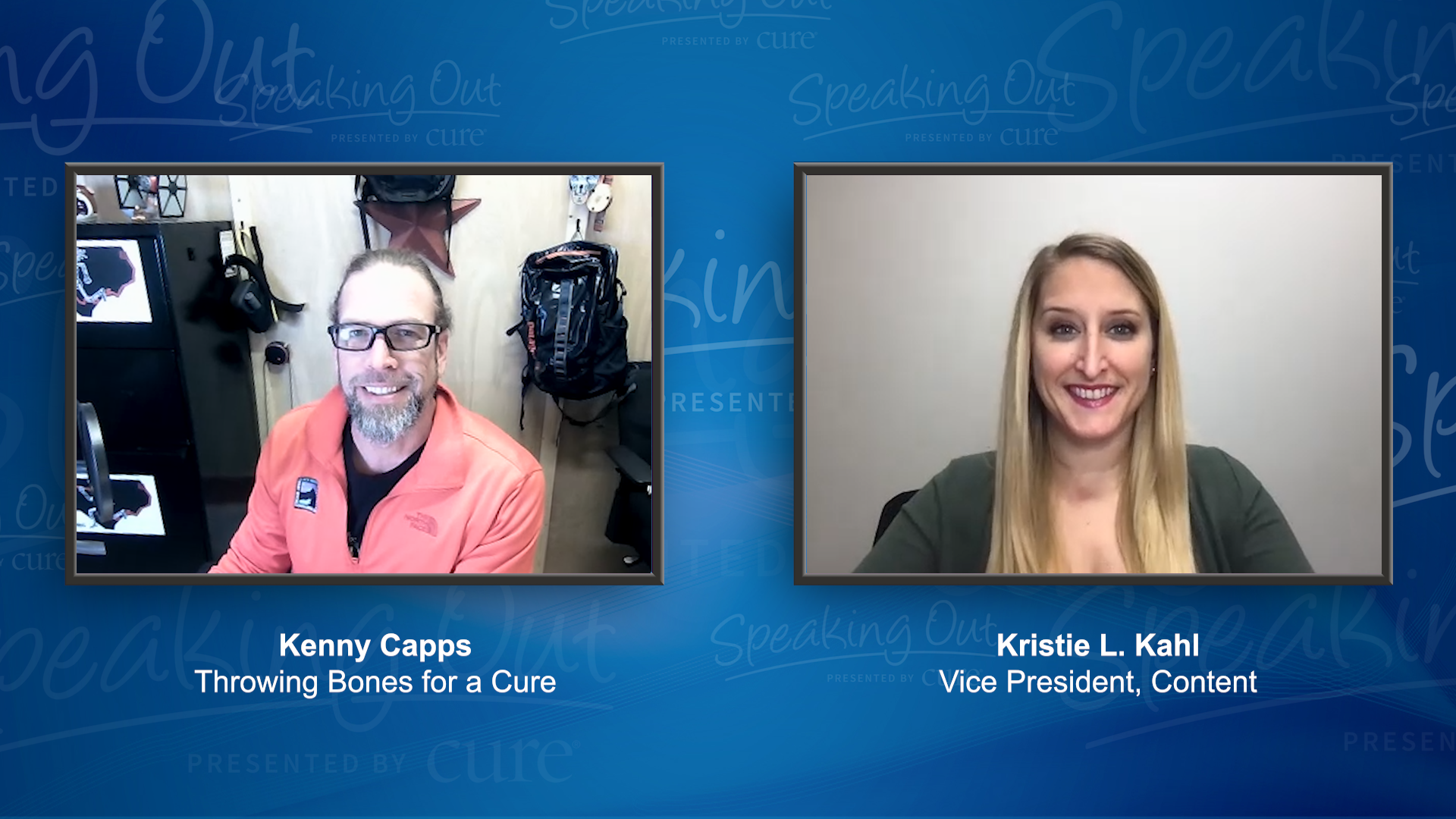 As part of its Speaking Out video series, CURE spoke with Throwing Bones founder, Kenny Caps, about raising awareness for multiple myeloma, and why sharing one’s story is helpful for others.

Kristie L. Kahl: To start, why is there a need to raise more awareness around this disease?

Kenny Capps: Well, interestingly enough, there are still people that I hear that referred to it as melanoma, which is actually really due to skin. And it's not the same. There's that but also there are a lot of people who are suffering from this illness and lots that have yet been discovered. And it can be and very often it is a terminal disease that needs to be caught and treated effectively and as soon as possible.

The average age of diagnosis of this disease is still in the mid 60s. However, there are more and more younger people all the time who are diagnosed with this disease. There are approximately 33,000 new myeloma patients diagnosed every year in the United States. That's a lot of folks. And the sooner that it is diagnosed, the sooner that they can, hopefully go into a treatment plan that can serve them. It's something that can be monitored and determine what level of sick they are. So the sooner the better. So the more that we can make folks aware of multiple myeloma what it is, and how important it is to be diagnosed. As soon as possible. I think the better for all patients.

Kristie L. Kahl: Are we seeing any challenges associated with trying to raise awareness around myeloma?

Kenny Capps: That's a good question. It's an interesting question. Because yeah, I don't know that I've seen any challenges of making folks aware of it, although maybe, maybe burnout, people or people don't like hearing bad things. And I think all of us have heard enough bad things lately. And so we want the world to be great. And we want the world to be healthy and we want our loved ones to live forever. And so this was tough. But from what I can tell, most folks that I've communicated with are really receptive to knowing about it and knowing more about it and what it means.

Kristie L. Kahl: What is the value in somebody becoming an advocate in the myeloma space?

Kenny Capps: Well, I mean, as a patient advocate, what's the saying of those who (can’t do , teach). it actually puts me in a position to learn more about the disease that I deal with. But it also allows me to have that perspective, that front row seat to show folks what it is that I deal with on a daily basis. Not to sort of fluff it up, not to make it shiny and happy. But to tell you truly, this is what's going on. And to also let you know that this is what's going on with me and look at me man, I'm doing okay. And it's not just coming from a place of someone that's asymptomatic. And so I think it's valuable to show folks that this is okay. And hopefully, beyond inspiration, which I hear a lot, also to give folks the ability to move onward and live life, this is pretty important. And stopping living because you have a disease, it's not living anymore.

Kristie L. Kahl: You're the founder of Throwing Bones. Can you talk a little bit about the organization and what you guys do to help raise more awareness around myeloma?

Kenny Capps: So, at Throwing Bones, our focus and our mission is to encourage blood cancer patients to stay healthy and active through treatment. And the purpose behind that, of course, is to show the value of purposeful movement in general, quality of life, assisting your care providers in treating you and treating your disease and treating your illness, and for you to get back to the that thing that we're talking about which is living and to make sure that you understand that this life is doable. Very often I hear folks who talk about some of the things that I have, which is bone lesions, and I have a lot of them, to share probably too much. I have lesions through my skull, collarbones, scapula, ribs, my hip, I've got two compression fractures in my back. But despite that, I'm actually doing the things that actually make me better physically, so that I can be treated and respond to treatment better. And to show that while not everybody needs to do all the same things that I've done. As an athlete, they can do things in order to make themselves feel better. And there are things that they can do to make themselves better and it doesn't involve sitting on the couch and waiting for the end to come. It involves actually doing and moving. So Throwing Bones’ purpose is to show you where you start to make assessments determining where you are now so that you can make goals to get to another place, someplace better, to feel better, also resources that are necessary in order to achieve those things.

Inspired to Reduce Cancer Disparities and Help Those in Need