From “General Hospital” star Cameron Mathison discussing his cancer experience to Dame Deborah James and Hells Angels founder Sonny Barger dying of the disease, here’s what happened in the cancer space this week.

Technoblade’s family confirmed the news on his YouTube channel to his more than 11 million followers.

He began uploading Minecraft videos to YouTube in 2013 but didn’t become popular until 2019 when he won multiple tournaments related to the game. Technoblade, 23, announced his cancer diagnosis in August 2021. He had previously recalled how he started experiencing pain in his right arm. Soon after his shoulder began to swell, and he went to the hospital.

The diagnosis was stage 4 sarcoma, a rare form of cancer that begins in the bones and soft tissue.

“This past year has had a lot of rough spots for our son as he battled stage four cancer. But he didn’t complain and kept using his famous strategic mind to try to beat what he knew were almost impossible odds,” Technoblade’s family said in a statement. “My son’s bravery on this path was a shining lesson to all of us who were privileged to walk it with him. Thank you for sharing his journey through it all, as he did the work he loved for his beloved fans.”

Cameron Mathison, who is known for his role as Drew Cain on the soap opera “General Hospital,” underwent surgery for kidney cancer in 2019. More recently, at the 49th annual Daytime Emmy Awards, the 52-year-old actor opened up about his cancer, and what life has been like ever since.

“(My cancer has) increased my desire and my willingness and my effort and motivation to help others and to spread the word and just to be a benefit," he told PEOPLE. "I work with a health coach now — I thought I knew a lot about what I was doing in the right and the wrong ways or whatever, but in the last year, I'd say, maybe 14 months, I've learned more about my own specific health challenges and growth than I have probably in decades before that."

Sonny Barger, who founded the Oakland, California, chapter of the notorious motorcycle club, Hells Angels, died this week after being diagnosed with stage 4 liver cancer.

A Facebook post on the 83-year-old’s page read, “If you are reading this message, you’ll know that I’m gone. I’ve asked that this note be posted immediately after my passing. I’ve lived a long and good life filled with adventure. And I’ve had the privilege to be part of an amazing club. Although I’ve had a public persona for decades, I’ve mostly enjoyed special time with my club brothers, my family, and close friends. Please know that I passed peacefully after a brief battle with cancer.”

Barger’s involvement with the Hells Angels started in 1957, when he launched the Oakland chapter of the club. He then moved on to become the national president when the former president went to prison. His tenure as president was then also cut short by his arrest.

Dame Deborah James, host of the BBC podcast, “You Me and the Big C,” which featured an honest look at her life with bowel cancer, died from the disease at the age of 40.

Over the years, James has raised millions of dollars for cancer research, garnering the attention of Prince William, who granted James damehood in a surprise visit while she was receiving hospice care.

“We are so sad to hear the heartbreaking news about Dame Deborah. Our thoughts are with her children, her family and her loved ones,” Prince William and his wife, Kate, said in a tweet. “Deborah was an inspirational and unfalteringly brave woman whose legacy will live on.”

Comedian Tig Notaro reflects on how her breast cancer diagnosis — and sharing it with the world — shaped her career.

Ten years ago, Tig Notaro walked on stage and started her set with, “Hello. I have cancer.”Now, she recently discussed how those words changed her life, and related that time to the COVID-19 pandemic, which helped some people get a clearer definition of who they were.

“It’s funny because with the pandemic, everybody always talks about pre-pandemic and post-pandemic, and I’m very much similar around that time period, where you’re always getting to know yourself,” Notaro said on the “Hello Monday” podcast. “But I feel like I really didn’t know myself on a whole other level before 2012.”

Notaro said that in retrospect, she has no regrets about going public with her breast cancer, and that she would do it all over again.

“Since that time period, I've been on a mission to feel good in my headspace, my body the company that I keep, the decisions I make, all of it. I want to feel good and that's not just me being selfish … with comedy if I have to think it's funny. For me to enjoy being there, which is going to hopefully in turn, make the audience feel that way. So it's similar in that I want to feel good,” she said. 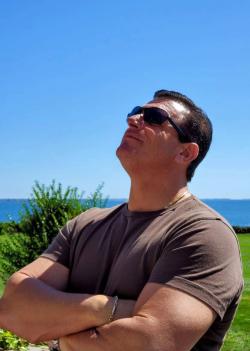