Putting Cancer Behind Me 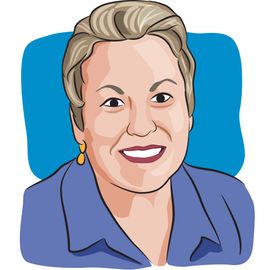 Kathy LaTour is a breast cancer survivor, author of The Breast Cancer Companion and co-founder of CURE magazine. While cancer did not take her life, she has given it willingly to educate, empower and enlighten the newly diagnosed and those who care for them.

In the years that followed, when I recalled something, it was placed in my life timeline as either before or after cancer.

When I was diagnosed with breast cancer at the age of 37, my life was divided into a before and after. In the years that followed, when I recalled something, it was placed in my life timeline as either before or after cancer. Thinking about mortality when we are supposed to be focused on babies and goals changes the way we remember things.

I think my life was impacted more significantly than others because I was one of the women who chose to stay involved in breast cancer not only as an advocate and volunteer in the nonprofit world, but also professionally as a writer. I knew that I wanted to help educate and empower women and men about breast cancer. My support group started a nonprofit to serve uninsured and underinsured women, and I began interviewing women, men and medical professionals for a book that came out in the early 90s.

I even got used to saying that cancer did not take my life — I gave it willingly to help educate and empower women and men.

Then a few weeks ago, I was at a small group meeting when it became my turn to give one of those 30-second intros that only hits the high points.

I talked about retiring after 25 years of teaching at a local university. I said I had published two books and that my daughter was working in New York.

But I didn’t say I was a breast cancer survivor! It only took a nanosecond for me to sense my omission and I jumped back in to add it before the next person began her introduction. How could I have left it out to begin with?

I don’t know, but when I think of myself, I know that my view of the world, which includes hope, courage and love, comes from my experience as a breast cancer survivor. At the age of 37, breast cancer shaped me as an adult who made a decision to live life every day.

Life. It’s interesting to think about who I would be had I not had breast cancer. And I will never know.

Breast Cancer Care for the Incarcerated