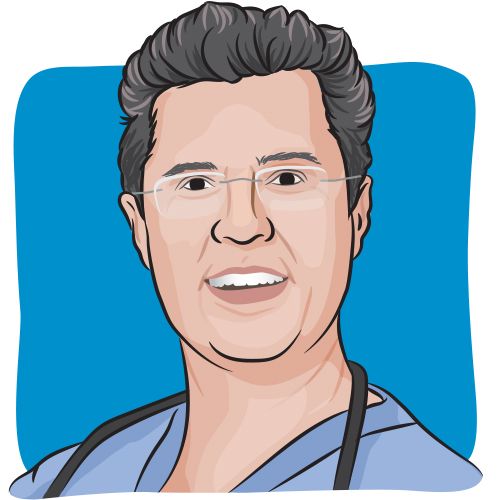 Rick Boulay, M.D., is a board-certified gynecologic oncologist. When cancer faced his family and his medical training left him ill-prepared to manage the day-to-day needs of cancer treatment and survivorship, he found wisdom, support and love in the patients he treated. As a result, Dr. Boulay, who is also a singer, now writes and performs on topics at the intersection of cancer and society.

A blog series of words and terms common to the cancer journey by Rick Boulay M.D.

Second only to diagnosis itself, nothing in the lexicon of the cancer journey conjures more emotion and power than the word “cure.” Strangely enough, “cure” rarely appears in medical literature. Clinicians use this term when speaking with patients, not other doctors.

It’s not that we aren’t hopeful (OK … usually). And it’s not that we are noncommittal (now that’s a downright lie). It’s just that we’re … well… cautious and exacting. And we want our language to reflect what we truly believe. And “cure” is a really big commitment — one that cannot, must not be proven wrong over time. There is far too much pain and tragedy (and, frankly, embarrassment) when we are wrong in pronouncing a cure to someone whose disease subsequently recurs. Instead, doctors prefer “five-year survival” and “remission” as more accurate terms in describing the condition where testing finds no further cancer in response to treatment.

As my colleague says, “The crystal ball’s a little cloudy.”

Upon completion of treatment, one of only two scenarios exists. Either all cancer cells are annihilated by surgery, chemo or radiation, never to return, or some of the little cells escaped and plan to mount a future counteroffensive. The trouble is that technical limitations thwart our ability to measure small volumes of cancer cells. Blood work, imaging like PET scans and CT scans, and physical exams are simply too crude at present to predict, always and accurately, whether cancer will recur. And so, as with Schrödinger’s cat experiment, a quiet cat placed in an opaque box is assumed to be both alive and dead at the same time. You just don’t know. Likewise, cancer cells after treatment are assumed dead, but we go on testing to discover any signs that the disease may have returned — CT scans, blood work, physical exams, ad nauseam. Only time will tell.

This we do know: Others previously endured your disease, at your stage and with your treatment. And we’ve recorded how they did: responses to treatment, how long the disease stayed away and if people lived or died. In fact, depending on which disease’s commonality, we may have lots of data to predict what we can expect. Therefore, we build a statistical model of what you can expect from your disease and its treatment. Called “survival curves” or Kaplan-Meier curves, these graphic representations plot the percentage of folks alive on the y-axis and time, in months, on the x-axis.

Using a graph, we can predict a patient’s percent chance of being alive at any point in time after treatment.

Ready to take it up a notch? For the advanced beginners, we can then plot several curves, each representing a different stage of the same cancer on the same graph. We get more information from one graph but increase the complexity of what we are looking at.

A couple of caveats here: First, we generally observe patients for five years. After that point, for most diseases, the curves are flat, meaning that we anticipate few further cancer deaths. Thus, the doctor’s five-year survival is equivalent to a layperson’s “cure.” So when docs uncomfortably utter the word “cure,” it’s usually after five years from diagnosis. At that time, we generally feel confident that the disease is gone. Secondly, these are dry, boring statistical models. So we know where the group will plot out. Each individual patient, however, that’s another story.

Early on, we don’t know with any certainty who will be cured. That’s where the term “remission” comes in: when there’s no sign of any cancer, but it is still too early to tell. When the clock strikes 12 on the fifth anniversary of your diagnosis, voila — “remission” magically transforms to “cure.” Sort of like a reverse Cinderella moment.

And thirdly, and perhaps most importantly in a time of rapidly evolving treatments, all published data are at least five years out of date because you have to wait that long to collect the data following the treatment performed. Treatment options change a lot during five years.

Finally, outliers exist. Unfortunately, patients with early stage disease can recur and die, and those with late-stage disease can outlive their predicted expiration date. My patient Lisa fits into the latter category. Lisa would occasionally end up in the hospital for bowel obstruction treatment when her home remedy of Dilaudid and a six-pack (not medically recommended) failed. Although we could say that Lisa found this a nuisance, she preferred the description “It just pisses me off.” Once, during a hospitalization, Lisa, her nasogastric tube, her IV pole and her angst rode the elevator down to the lobby for a walk outside to have a smoke (again, not medically recommended). A gray-haired attending physician in his crisp white lab coat, followed by a bevy of dutiful medical students, joined them for the ride.

Gesturing toward her cigarette pack and lighter balanced on the IV pole, Dr. Attending lectured, “You know, you should really give up that habit. It’ll give you cancer.” Unwittingly, he challenged a worthy adversary.

“I’ve lived for 10 years with stage 4 ovarian cancer. You think smoking’s gonna make it worse?! I don’t need you to tell me how to live my life,” she growled, standing her ground in a crowded, slowly moving elevator. There were some choice words mixed in there, too.

The elevator relented, opening its doors, and Dr. Attending and his ducklings and the awkwardness fled, leaving a cloud of smoke à la Wile E. Coyote. When Lisa recounts this story, she remarks that she didn’t think they got out on their anticipated floor. They just retreated to safety.

Live life as though you are cured. Be joyful. Plan events. Live gratefully. Share friendships. Tend to others. And live as though you are dying. Be thoughtful. Plan a legacy. Live humbly. Share memories. Tend to your own needs. And in this new normal of life after cancer, where little is taken for granted, meaningful coexistence between the planes of cure and dying defines our best living.