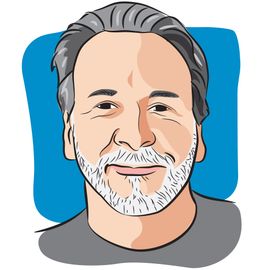 When the question “Why did I get cancer?” becomes “Why did I survive cancer, while others did not?” the guilt reflex is turned on its head.

“There's no problem so awful that you can't add some guilt to it and make it even worse." - Bill Waterson from "The Complete Calvin and Hobbes"

Even the most stoic among us must have at some point allowed the question "Why me?" to cross his or her lips or mind. Not only is it normal to question the arrival of such a traumatic event, it is the reflexive response of a mind honed for survival. I've found that resisting the urge to ask this inevitable question causes more problems than it solves. As a cathartic exercise, shouting to the heavens with a fist shaking, wanting to know the point of it all, helps to clear the way for a more heart-centered approach to healing.

At the other end of the cancer continuum, "Why me?" takes on tones of irony, empathy and longing. When the element of having done something wrong is added to the questioning of one’s survival, we end up with survivor's guilt. Here, the struggle is not coming to terms with illness, but an existential wrestling match with the meaning of life. Under normal circumstances, this quest for understanding would be both noble and liberating. That survivor's guilt is lumped into the category of “things I can live without” speaks to the corrosive nature of this self-shaming activity that often has very deep roots.

The origin of the word guilt means, crime, sin, moral defect or failure of duty. There are those who contend that guilt (in small doses) can actually serve as a self-correcting mechanism when one’s moral compass no longer points to true north — the self-punishment seldom fits the crime. Left unchecked, self-correction becomes self-condemnation that opens the floodgates of depression.

When the question “Why did I get cancer?” becomes “Why did I survive cancer, while others did not?” the guilt reflex is turned on its head. What is there to feel guilty about? No offense has been committed, no moral code broken and no failure of duty took place. How does the victim become a perpetrator? What purpose is served by calling into question the right to awaken to yet another day?I’ve learned through trial and error that trying to absolve one of guilt requires more than simply telling the person they have no reason to feel guilty. Ironically, efforts to make a person feel better about being a survivor often leads to an increased sense of shame for not appreciating the gift one has been given.

Step 1 is to name it: Guilt of any type is — more often than not — an echo of someone else's voice. By asking clients to give a name to the guilt trip they’re on, they’re released from feeling that it is the result of some personal character flaw.

Step 2 is to claim it: Owning the times when we’re victimizing ourselves with the guilt experience is much easier than trying to ignore, resist and fight. Subtract the feeling that one has failed to rid oneself of this experience and there is no longer the need to feel guilty about feeling guilty.

Step 3 is to reframe it: Reframing is a powerful psychological technique that has its roots in the age-old transformation of lemons into lemonade. Once we cast a painful experience in a more positive light, we drain it of its power. Ultimately, survivor's guilt arises from compassion for others and the desire to end suffering.

Finally, I will point out that survivor's guilt can have a bright side. In an attempt to scratch the guilt itch, many people go on to take on causes, donate to charities, seek cures, and, yes, even write blogs. As someone who experiences this phenomenon every time I show up at my oncologist's office for my follow-up visits, my personal mantra is: "I survived cancer, and I’m guilty of wanting the same for others."

Cancer Is A Thief