Associating luck with any disease is unfair.

Essentially, the survival rate of acute promyelotic leukemia (APL), assuming you make it through diagnosis and the first phase of treatment, is somewhere between 80 and 90 percent, according to the Leukemia & Lymphoma Society. While I have not been able to find a conclusive study that specifies the rate of early death prior to diagnosis, I was able to find one study by the American Society of Hematology's journal, Blood, that predicts, “an early death rate of about 5 percent to 10 percent within the first month of starting ATRA, mainly from intracranial bleeding.”

When I received the news that I was suffering from APL, I was told the same. Over the next four months of treatment, I was assured by a number of people that, “Of all the leukemias to have, this is the one you want to have!” I think the intention of such a comment was to make me feel comforted. However, the mind of a newly diagnosed leukemia patient fighting for their life is a complex one. I couldn't give my leukemia back and I didn't get to exchange it for another one anyway, so, there wasn't a ton of value in such a statement to me. However, over the weeks and months to come, it crept into my thoughts often.

I can remember sitting in outpatient day services during the second phase of treatment, speaking to a man who had a different blood cancer. He told me his story. He had refused to accept the standard protocol offered by his oncologist. Instead, he cut toxins out of his life and started juicing. He also started using medical marijuana, which he swore up and down is what helped him achieve and stay in remission for six months. His wife didn't like him using it, though, and pressured him to stop. Within weeks of stopping, he relapsed and felt forced to agree to the recommended protocol. The middle-aged man bawled without control as he spoke. It was one of the saddest moments I had experienced so far. And, it was also an epiphany for me. I felt guilty.

I recalled all the times I had been told how lucky I was to have APL. Here I was sitting across from this man eating my soup, which tasted great, drinking my tea, knowing that within the next couple weeks, he likely wouldn't be able to eat or taste anything. He would probably have nausea. Maybe he would even have mucositis. He would lose his hair and who knows how long that would go on for. What I did know was, although I experienced nausea, I didn't anymore; although I had experienced mucositis, I didn't anymore; and I could taste. My hair had fallen out, but would grow back soon, and I would likely never experience those things again. How lucky was I?

Today was a challenging day. We increased my dose of the maintenance drugs this week. My stomach feels unsettled. I've been having chest pains and strange headaches again. I can’t walk outside in the mornings and I've been experiencing tightness in my chest. I did manage to walk around the mall for an hour, though, and that is better than nothing — better than many others in my position.

Am I lucky? Yes, I am. I am alive. Does my “luck” discount my experience? No, it does not. Do I feel sorry for myself sometimes? Yes, I do and that's OK. The fact is, I just about died...twice. I almost didn't make it to diagnosis. Then, I became that 5 to 10 percent statistic when my heart rate dropped dangerously low. Yet, there I was sitting in the hospital being pumped with arsenic trioxide to combat my disease, feeling guilty that the man sitting across from me would never be told how lucky he was.

At the end of the day, everyone's personal experience is their own. No one is the same, diseases are different, protocols are different, starting health is different and mind frame is different. Associating luck with any disease is unfair. While we cannot change the words uttered by others, we can change how receive them. In a society that has become dispassionate, having compassion for others is a beautiful thing but it doesn't have to come at a cost to us, ourselves. 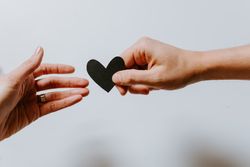 Having Compassion for Others During Cancer Treatment