Taking it One Day at a Time

Moving on while letting go of being a 25-year-old caregiver back to being a young woman.

Every time a cancer anniversary comes up, I am taken back to a day in time when my life was consumed by cancer. Back to a place when my time was dictated by the disease that was running rampant in my sister. As much as I have tried to move on, those dates stay with me, and I think that they always will.

When she gained remission, we — both my sister and I – had to begin living in a reality that neither one of us thought would exist. For so long, nobody thought that she would be okay. That she would defy the odds and make it through cancer. After life with cancer, people used to ask how I was doing, and I never really knew how I was supposed to answer the question.

Most people who asked how I was doing would preface the question with, "I am sure you are happy she is alive. How is life?" or "You must be so thrilled that it's over. How have you been?" Those questions and the likes of them asked caused a predicament when it came time to give an honest response.

Yes, I was elated that she was here and that we could begin to move on. Of course, I was filled with happiness that my sister hadn't succumbed to cancer as so many thought she would. That didn't, however, negate the many emotions that I was also feeling too. The day she gained remission, the feelings that I had felt during cancer didn't merely cease to exist and even to this day, some of them remain. How do you tell somebody those things?

How do you explain that the anxiety I used to have before every scan is still just as real when she goes in for check-ups? That some of the thoughts have shifted from worrying about her surviving to now worrying about her relapsing? That the toll having cancer invade a tight-knit family is a reality that I cope with every day?

When I verbalize these fears, I feel that those around me fail to understand why moving on has been hard. They don't seem to grasp why I am still so emotionally attached to a time in my life that was, as opposed to the present moment where things are now okay; when she is okay. What I think people fail to understand is that when remission is gained, life doesn't ever go back to the way it was.

I continued to be a caregiver until nearly a year after transplant when she had reached the first of her milestones and was cleared to be more independent. Going back to the real world after spending years of your life trying to save and care for another human doesn't happen overnight. No longer are my days filled with appointments, port draws, clinic time and hospital visits. That doesn't mean that my thoughts sometimes aren't still consumed with that time in my life.

Not being a caregiver has been a learning curve, just like learning to be a caregiver was. There is no map for how to reintegrate into society or for how to gain your autonomy back. The difference is that I had nurses and professionals with me to help me make the change from 23-year-old young adult to a caregiver. I haven't had the same support system as I shifted from 25-year-old caregiver back to a young woman.

It has been years since the questions of, "How are you doing?" first began. I didn't have an answer then, and while it may not be the best answer, I have started to respond, "I am taking it one day at a time." This response is identical to how I have tried to approach the transition from caregiver to being my person again. 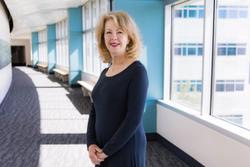