The Changing Face of Cancer Care

Going through cancer treatment in 1990 and again today has given me first-hand experience with how the landscape has changed.

I've had a ringside seat to the evolution of cancer care.

When I was a teenager undergoing chemotherapy for osteosarcoma, I never really thought I was going to die. Me and my teen cancer comrades in the hospital went through hell together. But I naïvely thought we would all get better and go home again one day.

I have seen cancer through an adolescent's eyes, and I have seen it through the eyes of a mom with three small children.

I was a busy mom, working, going to grad school, and raising our four-year-old son and two-year-old twin daughters. I was tired all the time, but who wouldn't be? And I had a string of chest colds that I just couldn't shake. Or maybe it was asthma. But a shelf full of asthma meds weren't improving my breathing. I stopped going upstairs to tuck my son in at night, too winded to read bedtime stories. I couldn't walk around carrying my little girls anymore; I could hardly walk across the room without panting. It wasn't asthma.

"Mama, I wish you didn't have cancer. It was nicer before you were sick."

I was 15 years old and in the hospital receiving chemo when the anti-nausea drug Zofran was FDA-approved in 1991. It was like the clouds had parted and I finally could see a ray of light through these wretched treatments. Prior to that, we had to take our chemo straight up. I spent my first several months of treatment vomiting all day long. Nothing stayed down, so I was sustained by IV nutrition. I roomed with another young cancer patient at the hospital, and she made it into a game; with each new spew, she would tell her mom to add that to the running tally on the whiteboard. Dark humor gets you through some rough times.

The whole wing of the hospital was silent the afternoon Karen died. She had been in a coma for several days. At one point her hand moved and her little brother took it as a sign that she was waking up. But then she was gone. She wasn't even 15.

Learning that I had cancer again seemed like some sort of cruel joke. I had already paid my dues, marched through hell, undergone several painful bone surgeries and been declared 'cured.' But it was different this time. This time it wasn't just about me. I had three beautiful little faces looking up at me, counting on me to be around to wipe their noses, kiss their scraped knees, hold their hands during their first heartbreak, and applaud as they received their diplomas. Each dream of the future was being wiped away with each new metastasis revealed on the scans.

Your spine, your shoulder blade, your hip, your liver.

I had kept in Christmas-card-contact with a few of my teen cancer friends. I used to ask after them at each annual checkup, "How's Rob? How's Linda?" But the answers were not always what I wanted to hear.

"Decided not to continue treatment."

"Passed away just before Christmas."

I stopped asking after that. In those days, we didn't have online support groups, websites listing clinical trials or even iPads to pass the hours, days, weeks or months in the hospital. We had to check out the VCR in two-hour increments and the whole floor shared that one machine.

My right arm was saved by a cutting-edge limb salvage procedure. My life is being extended by a brand new targeted therapy.

Cancer research is moving fast. Will it move fast enough to stay ahead of my cancer? I desperately hope so. There are three little people who are counting on it.

Tori Tomalia is many things: a mom, a wife, a theatre artist, a mediocre cook, a Buffy fan, a stinky cheese aficionado. She is also, unfortunately, a repeat visitor to Cancerland. Stay tuned for her continued adventures. 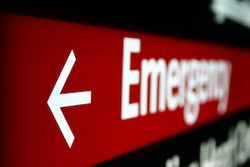