The Day I Became a Cancer Speaker 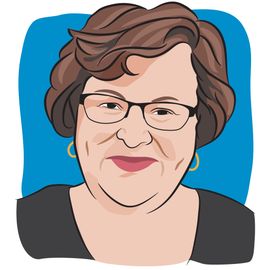 I stepped out of my comfort zone to share my cancer story.

I was terrified, but I knew I had to do it. Last year, I'd committed to being the keynote speaker for Western Reserve Hospital's annual Cancer Awareness Luncheon in Cuyahoga Falls, Ohio. I was certainly ready. I'd written the speech over the summer, and had been practicing it for about a month. The day had arrived — Oct. 19, 2018.

But there was no real precedent. Oh, I'd acted as a child at dinner theaters, and I'd done theater in high school and sung in the choir. I'd danced in a junior ballet company. About the closest thing I'd done to being a keynote speaker was being a reader of the gospel at church. It had all been show business, I told myself, and I summoned up all of my performance history and contemplated it; I'd done it before, I could do it again.

But I was so afraid. What they said was true. The fear of public speaking was akin to the fear of death. Just shoot me already.

Then, I rationalized that I spoke to my writing classes of 20 students each, three times a week. If I could get up in front of them and talk comma splices, thesis statements and paragraph development, I could certainly get in front of 200 people and talk cancer.

My speech topic was on all the people who had helped me survive cancer twice. I was going to discuss my family, my friends, my doctors and then some miscellaneous folks who'd been invaluable. The speech sounded a little like an Academy Award thank you speech. I was afraid it wasn't any good. Was it too sentimental? Too self-centered? Too dramatic?

I dressed and put on my make-up. Shoot, I'd applied too much blush. I looked like a clown. I wiped down the pink with a tissue.

Finally, it was time to leave for the event. I was going to get there a little early; the luncheon started at 11:00. I would arrive at 10:30. My husband and mother were going to meet me at the venue.

When I got to the conference center, people recognized me from my picture, which had been used to advertise the event. It was the closest I'd ever been to celebrity status. People were suddenly nice to me for no reason. I went in the conference room and was greeted by Kathy, the organizer of the event. She also seemed happy to see me. I was trying to be positive about the whole thing, but again, I was nervous.

I was particularly worried about speaking into the microphone. Should I say, "testing, testing, one, two, three?" Would I need to adjust it? What if no one could hear me?

I asked Kathy if I could practice a little of my speech while they were setting up. "Hello, everyone," I said into the mike. "I'm going to speak to you today about my life with cancer." Presto! The sound level was perfect.

Now there was nothing to be worried about. I remembered what my friend Noah had said to me yesterday, "Sing out, Louise," which was a famous line from Gypsy, the Broadway musical, a show I'd been in as a kid.

At 11:00, they let the crowd in. It was mostly women, but there were a few men. I knew that many in this group had dealt with cancer. It was a sympathetic crowd.

Then, at 11:15, they served the food. Even though I was nervous, I decided to eat. That would keep my mind off of what I was to do in about an hour. The chicken, green beans, sweet potatoes and salad were tasty. It was a highly nutritious lunch. They wanted to set a good example of eating healthy.

At noon, the program began. First a doctor spoke about overall good health and how to achieve it. And then, at 12:25, it was my turn.

I was introduced by the emcee, got up, went to the podium, and I was off. I concentrated on delivering my speech in an interesting way, trying to maintain a good speed — not too fast, not too slow. And then, I remembered, make eye contact. I found myself talking to the whole crowd, moving my head and then looking at specific individuals as I spoke.

Before I knew it, I was done, and the crowd was on their feet. A standing ovation! They were standing for me! That was a first.

I think I truly touched some people because many came up to me afterward and shared with me their stories about family members who'd lived and died with cancer. One man had lost both his wife and his daughter to breast cancer. A woman had survived and was thinking of writing a book about her experience. Many more were still dealing with cancer. I felt honored to have been able to share my story and listen to theirs.

Kathy presented me with a beautiful bouquet of fresh flowers. The whole thing was a little surreal. I had truly been a keynote speaker. I'd done it. I'd never done it before, but I'd done the job, and I guess I'd done it well.

Well, now that I have one speech under my belt, I have to say that I'm ready for more.

So now I'm a cancer speaker!