Hetty Carraway, MD: As we’ve talked about, the things we’re focusing on have been supportive measures to help decrease transfusion requirements, but ESA [erythropoiesis-stimulating agents]–based therapies are really not addressing the underlying disease. You smartly started with hypomethylating therapies and other agents in the high-risk category, where we try to modulate the disease rather than just treat a cytopenia. If I’m not mistaken, that’s what you were probably alluding to.

Guillermo Garcia-Manero, MD: You brought up a very important point: These bone marrows change in time. The blasts, chromosomes, and mutations can all change, so it’s crucial for the patients and audience to realize that, through the course of this disease, you may need to repeat a bone marrow test in addition to all the tests we were talking about earlier to know exactly where you are.

Hetty, you were talking about a new compound and new therapies for second-line treatment of anemia in patients with MDS [myelodysplastic syndromes]. You were saying that this was the first drug approved after 14 or 15 years. The study that led to that approval was called the MEDALIST trial. Perhaps you can teach us about the study and what we found.

Hetty Carraway, MD: Earlier, you talked a little about this new agent, luspatercept, that was FDA approved. This agent is what we call a ligand trap. It works to inhibit the TGF-beta superfamily, which allows for the maturation of the red blood cell or the erythrocyte. This is a very special drug. In the first study, the PACE-MDS study, there were low or intermediate-1 MDS patients who were no longer responsive to this ESA-based therapy. We found that those patients were more likely to respond to luspatercept if they had the presence of ring sideroblasts or an SF3B1 mutation. In the PACE study, they found that about 70% of patients with ring sideroblasts had an erythroid hematologic improvement, and about 40% of patients had transfusion independence with regard to red blood cell transfusions. The same numbers, in general, held true whether those patients had the presence of ring sideroblasts or an SF3B1 mutation.

We became very interested in patients who had ring sideroblasts or SF3B1 mutations. That led to the MEDALIST study, which was a phase 3 study looking at these lower-risk MDS patients with the presence of ring sideroblasts. They found that about 40% of patients in the luspatercept arm achieved transfusion independence, and about 50% of patients in the luspatercept arm achieved erythroid hematologic improvement. Of those patients who were treated with luspatercept and had a nice response, about 93% harbor this SF3B1 mutation. The promising transfusion independence rates and the promising improvements in the erythroid line with regard to hematologic improvement led to the FDA approval of luspatercept for this specific patient population.

Guillermo Garcia-Manero, MD: That was excellent. This study was transformative for us in the field for multiple reasons. We had not been able to approve a drug in 14 or 15 years, and that’s not because we were not working. We were working extremely hard. A lot of laboratories learned about the research, the mutations, and the biology of this disease. People like you and me did a lot of clinical trials to find better treatments. The reality is that the FDA had a very strict threshold for showing treatment that improved survival, which was difficult because of the heterogeneity of this disease. Eventually, they agreed that other things were also important, like the reduction in transfusions in the MEDALIST trial. That was a breakthrough moment to me because the authorities, the FDA, started looking at other aspects of this disease. Thanks to that, I believe we’re going to see many other agents approved for our patients. It’s important to realize how important it is to participate in a clinical trial.

I totally agree with you about luspatercept. It’s a drug that was approved for this specific type of MDS for all the reasons you were saying, but I believe it should have a broader role with this condition. The COMMANDS trial that you were mentioning is critical. This is a study for patients with earlier-stage disease, where the doctor is probably going to use an ESA. If someone is listening who is going through this transition, please ask your doctor about the COMMANDS trial. We need to get this data out because we strongly believe that drugs like luspatercept work even better if we use them early in the course of the disease. With the MEDALIST trial, we saw that patients who had fewer transfusions—let’s say less than four—had a much higher rate of transfusion independency and that the duration of those responses was significantly longer.

We see that this drug could be combined with multiple other compounds because the toxicity profile is quite acceptable. It’s a biological agent as you were describing, so we see trials combining it with lenalidomide, with growth factors, and even with these low forms of chemotherapy that we call the hypomethylating agents. So we were very excited about the approval of this compound. We were also very excited that results of this trial were published as the No. 1 poster in our annual hematology meeting and then published in the New England Journal of Medicine, which is the top journal in medicine. That was a major thing for a small field that doesn’t usually get this kind of notoriety. It was a combined collective effort from many hospitals all over the world, so it was beautiful to see and has been a major breakthrough for our patients. 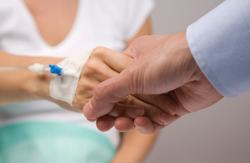 My Nurse's Guidance and Compassion Helped Me Survive Myelodysplastic Syndrome