Once weekly Kyprolis (carfilzomib) had better efficacy than lower-doses of the drug given twice a week to treat patients with relapsed/refractory multiple myeloma, according to results from the phase 3 ARROW trial.
BY Jason Harris
PUBLISHED October 25, 2017 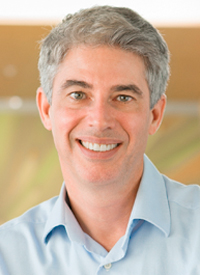 Sean E. Harper, MD
Once weekly Kyprolis (carfilzomib) had better efficacy than lower-doses of the drug given twice a week to treat patients with relapsed/refractory multiple myeloma, according to results from the phase 3 ARROW trial.

“Kyprolis has been demonstrated to be the most effective proteasome inhibitor available to patients with multiple myeloma,” Sean E. Harper, M.D., executive vice president of Research and Development at Amgen, the manufacturer of Kyprolis, said in a press release. “We are encouraged by the efficacy and safety profile of Kyprolis and dexamethasone administered once-weekly in the ARROW study.”

ARROW is an open-label phase 3 trial comparing once-weekly versus twice-weekly Kyprolis. Eligible patients (478 patients) had undergone at least two, but no more than three, prior therapies for relapsed and refractory multiple myeloma including Velcade (bortezomib) and an immunomodulatory imide drugs
(IMiD).

The primary endpoint of the trial was PFS. Secondary endpoints included overall response rate, overall survival and safety and tolerability.

The most frequently reported treatment-emergent adverse events (at least 20 percent) in either treatment arm were anemia, diarrhea, fatigue, hypertension, insomnia and fever.

In July 2015, the FDA approved Kyprolis for use in combination with Revlimid (lenalidomide) and dexamethasone for the treatment of patients with relapsed/refractory multiple myeloma following one to three lines of therapy, based on based on results from the phase 3 ASPIRE trial.

This indication was expanded in January 2016 for use in combination with dexamethasone or with Revlimid plus dexamethasone for patients with relapsed/refractory multiple myeloma following prior treatment with one to three lines of therapy, based on findings from the phase 3 ENDEAVOR trial.

The drug is also approved as a monotherapy for the treatment of patients with relapsed/refractory myeloma who have received one or more lines of therapy.

In August 2017, the FDA accepted a supplemental new drug application (sNDA) seeking to add overall survival (OS) data from the phase 3 ENDEAVOR trial to the label for Kyprolis for use in patients with relapsed or refractory multiple myeloma.

Results from ENDEAVOR trial published in The Lancet Oncology in August showed that Kyprolis reduced the risk of death by 21 percent compared with Velcade.

Kyprolis in combination with dexamethasone extended OS by 7.6 months compared with Velcade and dexamethasone (47.6 vs 40 months). The OS benefit was consistent for both patients who received previous Velcade and those who did not.

From June 20, 2012 to June 30, 2014, 929 patients enrolled in ENDEAVOR, an open-label, randomized controlled study. Patients were randomly assigned to Kyprolis/dexamethasone (464 patients) or Velcade/dexamethasone (465 patients) and treated at 198 medical centers in 27 countries in Europe, North America, South America and the Asia-Pacific region.

Investigators administered Kyprolis at a starting dose of 20 mg/m2 on days one and two of cycle one. If tolerated, the dose was escalated to 56 mg/m2 on day eight of cycle one. The 56 mg/m2 dose was then maintained on days nine, 15 and 16, and throughout subsequent cycles. Patients in the control arm received 1.3 mg/m2 of Velcade. Most patients (75 percent) received Velcade subcutaneously.

Slightly more patients in the Kyprolis group experienced grade 3 or higher AEs (81 percent vs 71 percent). Frequent (5 percent or more) grade 3 or higher AEs that occurred more often in the Kyprolis group included anemia (16 percent vs 10 percent in the Velcade arm), hypertension (15 percent vs 3 percent), dyspnea (6 percent vs 2 percent) and decreased lymphocyte count (6 percent vs 2 percent). Rates of pneumonia (9 percent) and thrombocytopenia (9 percent) were equal in both groups.
Be the first to discuss this article on CURE's forum. >>
Talk about this article with other patients, caregivers, and advocates in the Myeloma CURE discussion group.