Copyright © 2019
CURE Media Group.
All rights reserved.
Cure Media Group, LLC. All Rights Reserved.
CURE does not provide medical, diagnostic, or treatment advice.
MRI Would Rather Not, Thank You
August 27, 2015
It Gets Better After the Shock of an Initial Cancer Diagnosis
August 26, 2015
Part VI: How GIST and I Became Acquainted
August 25, 2015
10 Things to Know About Prophylactic Hysterectomy and Oophorectomy
August 24, 2015
Cancer Should Never Be a Usual Experience
August 20, 2015
Cancer Death & Dying: I Don't Want to Die and I Don't Want It to Hurt
August 13, 2015
Prehabilitation for Faster Physical Recovery Following Surgery
August 13, 2015
The Other Four Horsemen
August 12, 2015
Cancer Is Not a One-Person Job
August 11, 2015
Mid-Year Reflections
August 10, 2015
Print

Cancer and the Cricket: A Story of Survival

Male breast cancer survivor Khevin Barnes tells of an unexpected visitor–and an unforgettable lesson.
PUBLISHED August 04, 2015
Khevin Barnes is a Male Breast Cancer survivor, magician and speaker. He is currently writing, composing and producing a comedy stage musical about Male Breast Cancer Awareness. He travels wherever he is invited to speak to (and do a little magic for) men and women about breast cancer. www.BreastCancerSpeaker.com www.MaleBreastCancerSurvivor.com 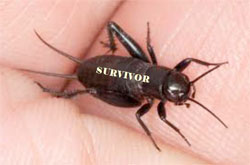 Where I live in Arizona, we have an abundance of crickets. I remember from my time working in Japan that they are looked upon as welcomed guests in the house, bringing good luck to all who make their acquaintance.

I was taking my morning shower the other day when I noticed a tiny insect hopping about on the shower floor, startled by the flow of water. I reached for my glasses, since I couldn’t make out the shape, and discovered that it was a cricket.

Before moving to Arizona, I was fortunate to spend a full year in residence at a Zen Buddhist Monastery known as the Palolo Diamond Sangha in Hawaii.

During that year of meditation, we were taught to revere all life on Earth, from the great quadrupeds that walk the planet to the tiniest creatures that crawl or wriggle. For that reason, we were instructed to remove any unwanted pests from our rooms or common areas, including the occasional venomous Hawaiian centipede, and release them in the tropical jungle outside.

During our evening meditation sessions those of us who wanted to visit with our master teacher for a few minutes would sit patiently outside his chambers. The mosquitos were plentiful in the moist atmosphere high above Honolulu and it was often a challenging task to keep from swatting them as they landed on our nose or ears.

In Zen the purpose of such a practice is to train students to fully accept whatever is happening to us at any given moment—and become aware of our habit of labeling situations as “good” or “bad.”

Eight months into our stay on the island I was diagnosed with male breast cancer, and during my recovery from mastectomy surgery   I was given yet another form of discomfort to sit with in addition to the flying pests.

Breast cancer delivers a variety of aches and pains, some of which still linger under my arm and in my chest more than a year after my surgery.

But this is a story about crickets.

My first instinct was to save the creature from plunging down the drain, and so I kicked at it with my bare foot, attempting to boot him off to the side where much less water was churning. The cricket, in its intrinsic drive to survive, kept hopping, and more often than not landed back in the swirl of water where he was perilously close to vanishing down the drain pipe. At last, with some slight hope of saving him, I stopped the water and stood there, dripping wet, as the whirlpool of suds circled around at my feet with the tiny insect spinning and bobbing in the wash.

Once the water had cleared I could see the limp form, lifeless it seemed, and most surely dead from the trauma he’d just endured.
I scooped him up, holding that soggy body tenderly and placed him on a paper towel in the bathroom.

I hoped he would survive, but I had no way of knowing.

This drive to live that we can observe in all of nature is one of the great forces of the universe, it seems to me. Our lives as cancer survivors are beaten back again and again as we’re knocked about like so many tiny insects, battling a force that seems unconquerable at times.

And yet, many of us do survive. Whether it’s decades or years or days, we fight the raging waters and lift our heads up to breath again and again.

There is a huge variation in survival between cancer types—from 1% to 98%, depending on the type and stage. But no matter the numbers, we have an uncanny urge to keep swimming and to keep surviving. This life force and compulsion to push on is the most impressive form of energy that I have ever witnessed.

I placed my cricket outside in the warming sun, watching and waiting, and soon he began to wriggle those tiny legs and in a flash he was off and into the garden for another dance through life and to chirp another song.

For a moment, I remembered the tightness under my left breast and then, just as quickly, I let it go. Like the cricket, I had a sudden, uncanny desire to hop about, sharing for a brief moment in this stellar tribute to the human experience—to ride out the flood, swim against the current, and to lift my head up in the dark of night and sing.