On Cancer and Swimming with Crocodiles

September is national Ovarian Cancer Month. My wife died of ovarian cancer at the age of 47. Her final wish was to swim with crocodiles. This is her story.
BY Khevin Barnes
PUBLISHED September 15, 2016
Khevin Barnes is a Male Breast Cancer survivor, magician and speaker. He is currently writing, composing and producing a comedy stage musical about Male Breast Cancer Awareness. He travels wherever he is invited to speak to (and do a little magic for) men and women about breast cancer. www.BreastCancerSpeaker.com www.MaleBreastCancerSurvivor.com 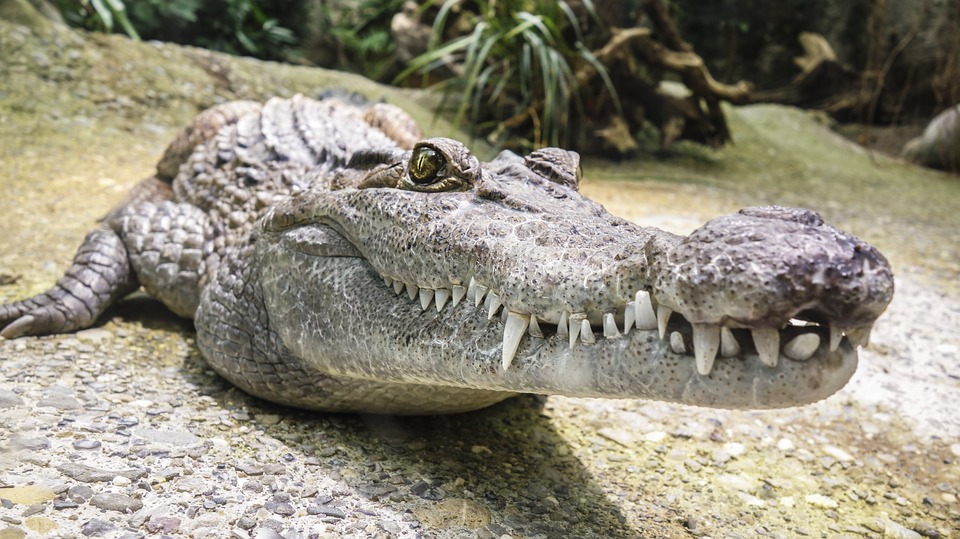 I lost my wife to ovarian cancer nearly 20 years ago.  She was 47 years old the day she died. It was Valentine's Day, and the year was 1997.

Before her diagnosis, we ran a business in California and one day, after enjoying our work for 13 years, we saw a book called “Camping Europe.” The thought of a low-budget trip that would allow for stopovers in many countries was appealing to us. We saved our money, sold our company and first home, bought two around-the-world open airline tickets and headed into the exciting world of the unknown.

And with the exception of the occasional hotel to enjoy the luxury of a good bed and hot shower, we traveled with our tent and supplies on our backs for eight months, visiting 55 countries and thousands of inspiring people.

During our time in India and Nepal, we both contracted an intestinal parasite common among the people there, which was the result of rivers polluted by human waste. The symptoms are muscle weakness, diarrhea and loss of appetite. It was cleared up with some medication that we had brought along with us, having done the research on possible bugs that we might encounter.

Once we returned home, my overall health was back to normal, but my wife’s symptoms lingered on—for a very long time.

With no medical insurance, we held fast to our belief that she had to be in good health due to a number of factors. Her age, along with the fact that she was an aerobics instructor, non-smoker and drinker, and had never taken so much as an aspirin in her life, convinced us that her discomfort was the result of that bout with the intestinal bug and nothing more.

After more weeks went by with no improvement, we finally decided to see a gastroenterologist who collected a sample of the fluid that seemed to be causing some swelling in her abdomen.

Within 24 hours the diagnosis was received: stage 3 ovarian cancer. And thus began our six-year battle with her disease.

She started her initial round of chemotherapy almost immediately. Adriamycin was the first drug administered, and she was in a good deal of agony each time it was infused. Weeks dragged on into months, and then years, as the cocktail of drugs continued, along with the long list of side effects. Her cancer metastasized to the pleura in her lungs. There were clinical trials and experimental therapies.

They began to drain the fluid from the lining of her lungs on a weekly basis, since breathing would become difficult whenever they filled up. She lost the ability to swallow and a food tube was inserted through her nose and into her stomach, and it became my job to feed her a liquid diet through the tube three times daily.

After four months, she was able to eat, and smile once again. Those of us with cancer know that it is a shrewd and cunning visitor, and the moments of quietude can never be assumed to last forever. So we learned to enjoy and revel in each day we had.

One day a wonderful friend handed my wife $2,500. “I want you two to take a break from all this when you can,” she said. “Do something outrageous!”

To my great surprise and delight, my wife exclaimed “I want to visit the rain forests in South America and swim with the crocodiles.”

She was bold, brassy and daring.  And she was determined to move forward despite her illness, always willing to immerse herself in the outrageous and unconventional experiences that life could offer.

We spent three weeks in South America and she did swim in the Amazon River, though our guides kept a close eye out for the crocodiles.

And then we came home. And her cancer was once again the prevailing force in our lives.

I don't remember what time in the morning it was when Meg died there in her hospital bed. It was a long night, connected to some long years, and a lifetime of memories and good adventures.

Now, with my own breast cancer reminding me each day to be bold and brassy and daring just as she was, I look back to the lessons of my wife’s life and death. Knowing what I know now about her struggle, I have to wonder if I, too, can place the drive for adventure and risk and daring above all else, and be willing to pull myself away from the cancer battlefield long enough to take in one more grand experience and to remind myself of one more reason to be here.

I would like to be so bold. And my hope now is to live life fully until there is no more.

I wish to open my heart to the experience of the unknown and to be available to reach out even in the darkest of hours, to be amazed by all that has transpired in my life. And perhaps, when I am fully capable of letting go of all that I cling to — including this very life — I may even take a swim with the crocodiles.  Khevin Barnes is a male breast cancer survivor.  His interest in ovarian cancer has continued over the last 20 years and he is encouraged by the remarkable advances he sees in the methods of treating the disease. www.breastcancerspeaker.com
Be the first to discuss this article on CURE's forum. >>
Talk about this article with other patients, caregivers, and advocates in the Ovarian Cancer CURE discussion group.