Reconstruction Is an Option for Male Breast Cancer

Two survivors investigate the frequency and availability of this post-cancer procedure.
BY Khevin Barnes
PUBLISHED October 03, 2017
Khevin Barnes is a Male Breast Cancer survivor, magician and speaker. He is currently writing, composing and producing a comedy stage musical about Male Breast Cancer Awareness. He travels wherever he is invited to speak to (and do a little magic for) men and women about breast cancer. www.BreastCancerSpeaker.com www.MaleBreastCancerSurvivor.com
The following article was co-written by male breast cancer survivors, Khevin Barnes (U.S.A.) and Rod Ritchie (Australia)

Breast cancer is about 100 times less common among men than women. For males, the lifetime risk of getting breast cancer is about 1 in 1,000 and it usually strikes men in their mid 60s. They are often diagnosed at a more advanced stage than women, mostly because they and their medical practitioners are not always aware that men get this disease, too. Not only are their stages and grades higher, but in the urgency to receive surgery, chemotherapy and radiation, the discussion of breast reconstruction for men tends to end up on the back burner. While women are frequently informed about reconstruction, rarely is the topic mentioned at consultations with a man’s medical specialists.

According to Minas Chrysopoulo M.D., a leading plastic surgeon specializing in breast reconstruction, most men undergo a modified radical mastectomy (MRM) as part of their breast cancer treatment. This includes removal of the breast tissue, nipple-areola complex and one or more of the axillary lymph nodes. Some patients may be candidates for nipple-sparing mastectomy or breast conservation (lumpectomy and radiation) depending on the breast cancer location and staging. So, breast reconstruction is nearly always delayed until other treatments have been completed. Men have several options to achieve a natural breast reconstruction, including fat grafting, implants, tissue transfer from other parts of the body and even nipple reconstruction.

The method of reconstruction chosen by most men is through fat grafting. It involves removing fat (using liposuction) from one area of the body, purifying it, and re-injecting it into the reconstruction site. It is not uncommon for men to require a second treatment since over time, as the body will absorb some of the injected fat. The procedure is generally well tolerated with satisfactory results.

Breast implants for men are another option. A small implant, usually custom designed to fit the contour of the breast, is placed under the chest muscle.

Some men require a more complex form of surgery known as a radical mastectomy (as opposed to the modified radical) which involves removing muscle as well as breast tissue. In these cases, a reconstruction method using tissue from the back, known as a “flap” can be utilized to rebuild the chest muscle. Nipple reconstruction, tattooing and scar revision offer further options

To help find out why men weren’t stepping up to the plate and asking for reconstruction, we surveyed 15 guys from the male Breast Cancer Coalition (MBCC). We found only half were offered reconstruction, and 93 percent chose not to receive it. Surprisingly, nearly 90 percent of these men didn’t even want the extra operation, and nearly three-quarters of them were happy with this decision. Nearly all didn’t consider it to be a procedure they would have in the future.


There are obvious reasons why over two-thirds of women undergo breast reconstruction, compared to fewer than 5 percent of men. Female breasts are regarded as an integral part of their anatomy and are very often associated with their sexuality. For men with minimal breast tissue, reconstruction is low on the list of post cancer alternatives. Also, women are diagnosed on average 10 years earlier than men, and many might feel the desire to regain their body appearance.

Perhaps, in the case of males, some guys might even be “proud” of their survival scars. It’s been observed by the authors of this report that often times male breast cancer survivors, upon meeting one another, will embrace in a big man hug and then show and compare their scars. Perhaps guys feel that having “won” their encounter with the disease; they can wear those scars as a badge of courage. As Male Breast Cancer Coalition founder Bret Miller says, “This is my battle scar and I am proud to show it”. 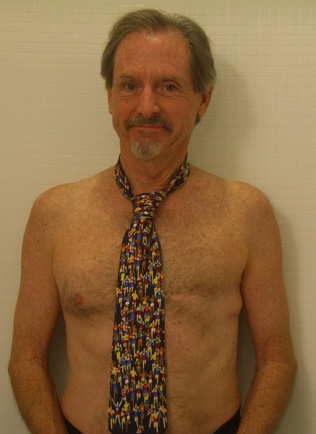 Like half of the men who responded to our survey, breast reconstruction was never discussed with me by my surgeon. Had it been suggested to me, I would have opted to see the results of my scarring rather than having reconstruction at the time of my mastectomy of the left breast. In my experience, men have a wide variety of scarring patterns, often related to the size and shape of their chests, the presence or absence of chest hair and the texture and appearance of their skin.

Being on the thin side, I felt that the difference between my remaining whole breast and my surgery site was minimal.

Additionally, the covering chest hair seemed to camouflage my scar significantly—the result of some fortunate genetics. I feel that if the result had been different and my mastectomy scar was more pronounced I would still choose not to have reconstructive surgery. The degree to which I feel self-conscious in a public setting (at the beach for example) is minimal. 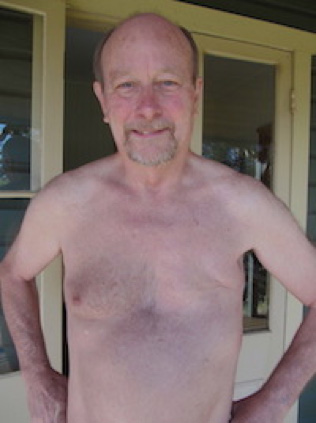 When I was diagnosed, the furthest thing from my mind was breast construction. I was still getting over the fact that I had a cancer that I didn’t think men got, while also still coming to terms with the fact that I even had breasts. Also, my memory of what my breast surgeon discussed after hearing the word “cancer” was a blur, although she did tell me later that due to my inflammatory and aggressive cancer, she would be working hard to remove all tumorous tissue, including all my underarm lymph nodes, and that reconstruction was generally not offered to men. Also, since radiation treatment left me without chest hair on the mastectomy side, a half-hairless new chest would have looked pretty weird.

Like three-quarters of the guys in this survey, I wasn’t that concerned with my scarred look, but I certainly empathized with the thousands of women who go through the various operations to restore a removed breast. So, when my young grandkids ask me what happened to my chest, I say, “I was in a sword fight.” “Cool,” they reply.

Rod Ritchie is a Male Breast Cancer survivor, web publisher and advocate. He uses social media effectively to spread the message that men get this disease too, and volunteers as a telephone counsellor and as a volunteer at his local hospital. His website http://www.MaleBC.org educates and informs those going through treatment. In conclusion, breast cancer reconstruction is a highly personal choice for both men and women. Although it’s clear that most men choose not to have it, our mission as two men who are dedicated to the dissemination of information and support for our fellow survivors, we continue to work alongside all who share this disease to explore every option available to us in our health and healing.
Be the first to discuss this article on CURE's forum. >>
Talk about this article with other patients, caregivers, and advocates in the Breast Cancer CURE discussion group.