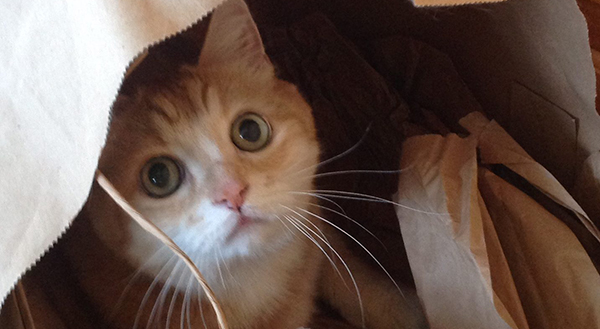 Life has an odd way of reinforcing its lessons.

Due to my own lung cancer journey, I've learned a lot about the uncertainties of cancer diagnostic procedures and treatment. I've learned that cancer is sneaky; sometimes it doesn't announce itself until it is in advanced stages, doesn't behave as expected, doesn't present a clear diagnosis with a "best" treatment option. And I've learned the value of making treatment choices that allow the patient to do what matters most to them, rather than prolonging life at any cost. For many patients, qualify of life is more important than quantity of days.

Recently, life gave me the opportunity to apply my hard-won wisdom to my beloved 14-year-old cat, General Nuisance.

General is a fluffy, snuggly ball of love. He has been MY cat since the moment we adopted him. Rescued as a feral kitten, he gradually overcame his extreme skittishness and allowed my husband and son to give him attention, but I'm always his first choice among humans. Though he is a favorite with the techs and doctors at the vet (the focus of doting attention), he always cowers when he's there, and never really adapts to his posh kitty condo when he boards with them. His greatest joy is to be with me, and he expresses it with a resonant purr that can be heard across a room.

General also has long-term gut and anxiety issues. Last week, the gut symptoms took a turn for the worse. His anti-nausea medication was losing its effectiveness, and he was clearly feeling unwell despite his inborn feline tendency to hide his infirmities. I took him to the vet for X-rays and an ultrasound.

The X-rays revealed a walnut-size tumor in one lung, as well as a large abdominal mass which was not visible on X-rays five months ago. The ultrasound showed the gut mass was a combination of a thickening in his gut wall (characteristic of inflammatory bowel disease, or IBD) and enlarged lymph nodes in several places. Since lung tumors in kitties tend to be metastases from elsewhere, and the lymph nodes were enlarged, General likely has metastatic lymphoma, or some other kind of metastatic cancer, as well as IBD and his long-known progressive kidney failure.

I cried a lot as I waited in the small exam room for his test results.

I was responsible for making the best possible decision for General. Fortunately, the lung tumor is not yet impeding his breathing, but given that metastatic cancer is not curable in humans, I asked what we could do for General if he did have cancer. The vet said that because General's enlarged lymph nodes are widespread, surgery would probably not be an option. Chemo would be a possibility, but is not often effective in his suspected type of cancer (lymphoma) and might be hard on his already failing kidneys. I asked if chemo for metastatic cancer is as difficult for cats as it is for humans. The vet said it would be rough. He explained that typical cat life expectancy for metastatic cancer might be six months with chemo, but giving an accurate prognosis for a cat was difficult and complicated by General's gut and kidney issues. My kitty might have less than two months, or as much as two years. I would need to consult a veterinary oncologist for more specific information.

I asked how we could confirm that he had cancer. Similar to humans, the only ways to get a definitive cancer diagnosis on a cat is to get a biopsy sample of a tumor using a fine needle pushed in from outside the body, or surgery. The fine needle biopsy would be uncomfortable at best, and might or might not obtain tumor tissue from the tiny lymph nodes (as I know from the failure of one of my own biopsies). Surgery would weaken him more and be painful.

I thought of the fear that this anxious kitty would experience during weekly vet visits for intravenous chemo. I thought of my own physical discomfort during chemo, and how my kitty would not understand why he was feeling so lousy. I thought of his age (he's an old guy in cat years), and IBD, and the impact of chemo on his kidney disease. Then I thought of General's joy at being home with his humans.

I decided then that I was not going to make General take chemo. For this nervous kitty, in his current state of health, chemo would not provide his best quality of life for however many months he has left. In light of this choice, I chose not to subject General to the discomfort of a biopsy. While I would like to know his diagnosis with certainty, the results of the biopsy (whether definitive or unrevealing) would not make a difference in his treatment.

After further discussion, General's care team decided to tweak his medications and add a steroid to treat his IBD. The steroid should reduce inflammation, ease any breathing issues and boost his energy; if it's going to help, we'll know in the next five to seven days. I will keep an eye on his symptoms, and the vet will take a look at him again in a week (or sooner, if needed).

Though our fur babies bring much light and joy into our lives, they are with us for only a short while. We are responsible for their well-being while they are in our care. No matter what we do, all pets eventually die. I'm already grieving General's impending loss, yet I need to stay in the moment. For as long as possible, I aim to shower my fluffy, devoted orange boy with love and attention in his most familiar and comfortable setting, so that he might feel the greatest possible joy in whatever time he has left.

When I can no longer keep him comfortable, I'll let him go. I hope we'll meet again at the Rainbow Bridge.

If my metastatic cancer progresses to the point that I am unable to make choices for myself, I trust my family will give quality of life first priority for me.
Print | cure Printing...