http://www.curetoday.com/publications/cure/2014/winter2014/surviving-caregiving
Surviving Caregiving
Kathy LaTour
As the cancer survivor population has grown and cancer treatment has become increasingly outpatient, caregivers have assumed more responsibility not only for the diagnostic and treatment phases of cancer, but also for the medical and psychosocial issues of survivorship, often forgoing their own health and well-being.

The result is a population of cancer caregivers whose health—both mental and physical—is suffering, says Allison Applebaum, director of the Memorial Sloan Kettering Cancer Center Caregivers Clinic in New York, the first of its kind in the country that provides clinical care, research, teaching and outreach for caregivers.

“This generation of cancer caregivers may become the next generation of cancer patients,” she says, explaining that her concern comes from the reality that caregivers are navigating an increasingly complex health care system with little education or support, while at the same time trying to maintain the family financially and emotionally. The purpose of the caregivers’ clinic, Applebaum says, is to help caregivers maximize their ability to provide care to their loved ones while concurrently attending to their own self-care needs and those of the family.

The National Cancer Institute defines a cancer caregiver as a person who gives care to people who need help taking care of themselves, which includes formal caregivers such as health care professionals or social workers. Here the term represents what are thought of as informal caregivers, family members and friends, and while the number of those caring for someone with cancer is hard to capture, it was estimated to be around four million in the United States a decade ago.

Studies show that caregivers have a health status similar to the general population until they begin caregiving, when they more often report fatigue, sleep disturbance, impaired cognitive function, pain, and a loss of physical strength and appetite compared with noncaregivers. In addition, many caregivers have pre-existing health problems of their own.

“We want to work with caregivers from diagnosis on; that way we can prepare them for survivorship while their loved one is still in treatment.” —Allison Applebaum

There are several studies examining anxiety and depression at different times in a patient’s cancer experience: at the time of diagnosis, a year later and five years later. Great strides have been made in identifying distress among patients, Applebaum says, but where we are failing is in the needs of caregivers.

She explains that data show that the distress caregivers experience as they care for someone undergoing treatment does not dissipate when the patient ends treatment and moves into extended survivorship. “For many caregivers,” she says, “the symptoms worsen.”

A second concern, and what Applebaum says she sees among the caregivers in the clinic, is the challenge in renegotiating roles in the family when caregiving time is reduced and the patient moves into life after cancer.

“One of my patients was a full-time physician who cut down his work hours significantly to care for his wife,” Applebaum says. “He concurrently took a much larger role in caring for the couple’s two young children who were under age 3. Now that she is doing better, he is struggling with returning to work full-time.”

Applebaum says it has been very hard for the man to go from caregiver of his wife and children to part-time caregiver and full-time physician. In addition to the competing responsibilities underlying this struggle are shifting values and a growing desire to spend more time with his family now that his wife is doing better.

Similar challenges are faced by caregivers of patients with what is considered chronic cancer, Applebaum says, referring to those who fluctuate between periods of recurrence and remission.

“Such caregivers are at particular risk for emotional and physical burnout because time for respite is scarce and the threat of advancing disease is always present,” she says, adding that a unique challenge for these individuals is continuing to live life as fully as possible, including engaging in the relationship with the patient despite the recognition of the possibility of the patient’s decline.

It’s really a matter of on-the-job training, says Carly Mesavitz, an oncology social worker and caregiver program coordinator for CancerCare in New York. And one of the hardest realizations, she says, may be that, when treatment ends, everything will not automatically go back to normal. Indeed, the discussion often centers on finding the “new normal” that is life after cancer. It creates a lot of tension and sometimes anger, which Mesavitz tells caregivers is normal. She then helps them find a way to use the emotion to their advantage.

“We want to work with caregivers from diagnosis on,” says Mesavitz. “That way we can prepare them for survivorship while their loved one is still in treatment.” When treatment is ending, she says, the questions that come up have to do with how involved they should be, whether they should do all things or take a step back. “They are struggling with balance.”

In 1990, 35-year-old human resources director Rob Harris’ wife Cindy, 31, was diagnosed with non- Hodgkin lymphoma that presented in her knee. After chemotherapy and radiation, she was declared cancerfree, and she and Harris, along with their two young sons, went on with their lives.

Sixteen years later that same knee gave out and Cindy fell off a curb, the first sign of stage 3 radiation-induced sarcoma, caused by the aggressive treatment of her previous cancer. They were told she had less than a 30 percent chance of surviving. After nine months of chemotherapy, eight operations and multiple hospitalizations for infection, Cindy’s leg was amputated in 2010, leaving her wheelchair-bound. As the caregiver, Harris was with Cindy for each event, meaning multiple hour-long drives from their home in Orlando, Fla., to Moffitt Cancer Center in Tampa.

“There were times when it didn’t matter how it was said, it felt like I was expected to be seen, but not heard,” he says, adding that in the health care system, he often felt like a spectator. 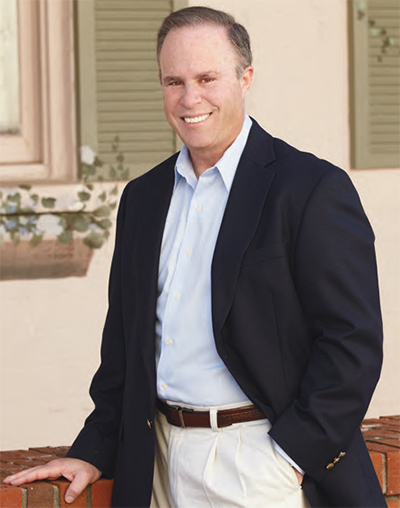 Rob Harris cared for his wife, Cindy, through her bouts with non-Hodgkin lymphoma and sarcoma. Photo by Marc Vaughn.

At one point Cindy was given medication that caused her heart to stop momentarily. Harris was in the room with her when it happened.

Cindy is now a number of years into survivorship, and Harris compares her current state to post-traumatic stress disorder (PTSD), which affects the whole family. Symptoms include a reliving of traumatic events, anxiety, worry and an inability to move on with life. Every six months, the couple returns to the hospital for checkups and meetings with oncologists that require multiple scans and blood tests. “Each time, we silently stress about the possibility it’s returned,” Harris says. “In other words, there’s no getting it out of our minds completely. We never relax or completely let our guard down.”

Harris’ situation reflects one outcome of the push to outpatient care, Applebaum says. “The benefits to being discharged early are reduced risk of infection and increased comfort, but the problem is that the burden of care is on the caregiver, and, more often than not, caregivers are not prepared.”

During Cindy’s recovery, Harris was expected to give her a shot that cost $5,000 per injection. Luckily, the nurse at the school where Cindy worked offered to do it for him. To cope with the stress of his wife’s treatment and her multiple hospitalizations, he not only kept a detailed journal, he jogged regularly.

Applebaum says that many of the caregivers she encounters will say that one of the most stressful times for them is when their loved one is discharged from the hospital or from care, because it is now their perceived responsibility to recognize symptoms and manage everything the way a professional would.

“They are expected to be an extension of the medical team,” she says, adding that the complicated family dynamics don’t go away when they enter survivorship because they are less likely to get support that was more readily available at the hospital.

[Caring for Patients with Advanced Cancer]

Although caregivers need support, they often do not have time for support groups, says Mesavitz. This is why CancerCare, along with a number of other organizations, offers free individual phone counseling to caregivers across the country as well as online support groups that are accessible 24/7.

Mesavitz encourages caregivers to talk to the doctor about what to expect in the future. For example, what are the long-term effects, and will the patient have pain or discomfort? “What should they expect emotionally? Will the patient have mood swings or other lasting emotional effects as a result of treatment?” she says. “We can give them a place to talk about all of these concerns.”

In 2002 the American Cancer Society’s Behavioral Research Center began an eight-year study on caregivers, the largest nationwide, long-term study of its kind, involving some 2,000 caregivers.

Its findings support earlier studies on caregiver wellbeing, reinforcing the understanding that the quality of the relationship before diagnosis impacts directly on the experience for both caregiver and patient, and that those caregivers who feel “close to their partner and who rely on others to provide support experience less difficulty in providing care.” Results also indicate positive outcomes in those relationships, including a greater appreciation for life’s purpose and a sense of personal strength and new possibilities. Family members who were able to find meaning and peace in the cancer experience reported better mental health. In addition, they had better physical health when their loved one found more meaning, peace and faith from the cancer experience.

“Accepting new possibilities of emotional and spiritual growth, appreciating new relationships with others and maintaining core priorities in life are key elements in thriving when caregivers are faced with the challenges of cancer in their family,” the report states.

Mesavitz recounts the story of the couple who ran marathons together, and when the husband was unable to resume this activity after treatment for non-Hodgkin lymphoma, his wife became very frustrated. “He would tell her to go without him, but she didn’t want to,” Mesavitz says. “Her badgering him was not helpful because he was already feeling the loss of not being able to do the same activities he used to.”

“Although caregivers need support, they often do not have time for support groups.” —Carly Mesavitz

Harris says his life and his relationship with Cindy changed the day her heart stopped momentarily, with the couple deciding that they would treat every day like it was their last. Today, they focus on how to give back and make other people’s lives better. The frustration is still there since she cannot walk, he says, and she is plagued with phantom pain in her amputated leg, a situation that he finds frustrating because he cannot help.

His mantra for other caregivers is to stop worrying, because it won’t change anything, and replace it with finding ways to make each day meaningful.