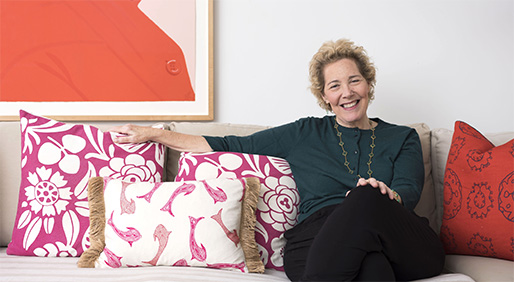 NINA BEATY, a small cell lung cancer survivor, says she is alive because of immunotherapy.
- PHOTO BY: BEN HIDER
Nina Beaty was one of the last patients to enroll in a clinical trial testing immunotherapy for the treatment of small cell lung cancer (SCLC) in May 2015 at Memorial Sloan Kettering Cancer Center (MSK) in New York City, where she resides. Now, she credits the trial for saving her life. The trial tested the drug Opdivo (nivolumab), an immune checkpoint inhibitor that blocks a pathway in cancer cells called PD-1, which is a protein that prevents T cells from recognizing and attacking cancer cells.

In Beaty’s case, within four weeks of initiating treatment with Opdivo, the 63-year-old woman’s tumor had shrunk by almost half. Now, nearly two years later, she continues to do well.

“When my oncologist saw my results, she was amazed,” Beaty recalls. “She gave me a huge hug out of sheer joy when sharing the news. I’ll never forget that moment of celebration for all of us in the room.”

Immunotherapy treatments, another class of drugs called PARP inhibitors and a DLL3-targeted antibody-drug conjugate called Rova-T (Rovalpituzumab tesirine) are among a group of new therapies showing early promise in clinical trials for the treatment of patients with SCLC, a disease that has had little improvement in prognosis in the last 25 years.

WHAT DOES AN SCLC DIAGNOSIS MEAN?

Small cell lung cancer, the most aggressive form of lung cancer, is named for the small, oval-shaped cancer cells seen under a microscope. It accounts for about 10 to 15 percent of all lung cancers in the United States.

Unlike non-small cell lung cancer, it spreads earlier and is often diagnosed at a time beyond the point where surgery could be considered — leaving chemotherapy as the only standard option. SCLC usually starts in the bronchi, and then quickly grows.

“In the patients who come to see me in clinic with SCLC, they describe having developed symptoms quickly, with a significant change in their normal activities in a short period of time,” says Lauren Averett Byers, M.D., assistant professor in the Department of Thoracic/Head and Neck Medical Oncology at The University of Texas MD Anderson Cancer Center in Houston.

Most lung cancers do not cause any symptoms until they have spread, but some patients with early lung cancer do have symptoms. Among the most common symptoms seen in patients with SCLC are worsening cough, shortness of breath and labored breathing. However, SCLC can also be diagnosed incidentally on chest imaging with patients experiencing no symptoms at all, as was the case with Beaty. The disease occurs more commonly in people with a history of smoking, but there are rare cases in individuals who have never smoked. Once SCLC is discovered, it is typically classified as either limited stage — disease confined to one side of the chest — or extensive stage — where tumors have spread to the opposite side, or beyond the chest.

Patients with limited-stage disease, representing about 40 percent of all diagnoses, can be treated with radiation to the chest, chemotherapy or surgery, and have a median survival of 16 to 24 months. In patients with extensive-stage disease, the disease has become too sizeable for radiation treatment, Byers explains. These patients are usually treated with chemotherapy alone, and have a median survival of between 6 and 12 months.

Due to the high rate of brain metastasis, a technique called prophylactic cranial irradiation (PCI) is a standard treatment for all patients with SCLC who respond to chemotherapy. PCI has been shown to improve survival to a significant degree in patients with either limited or extensive stage disease. However, it may be best to use in younger patients, because some study results have shown PCI-related neurotoxicity, such as dementia or walking disturbance, more frequently in older patients.

When Beaty learned about her SCLC, she was diagnosed with limited-stage disease and underwent traditional treatment with platinum-based chemotherapy and radiation. Her cancer responded to treatment, but within a year her follow-up imaging scans showed that her original tumor was growing back, and the disease had spread to other parts of her body.

“SCLC is a type of cancer that responds well initially to chemotherapy and radiation,” Byers says. “Often we see a lot of shrinkage from the treatment and patients notice an improvement in symptoms, but the challenge remains that for almost all patients, the disease is going to come back at some point.”

Only about 10 percent of patients with SCLC remain disease-free two years out from the start of therapy.

Knowing that she was running out of options, Beaty’s doctors referred her to MSK to enroll in a clinical trial testing experimental therapies.

For years, researchers have sought more effective treatments for patients whose SCLC has progressed after their initial treatment, says Charles M. Rudin, M.D., Ph.D., chief of the Thoracic Oncology Service at MSK.

Currently, topotecan is the only FDA-approved therapy for recurrent SCLC. The chemotherapy drug has been shown to improve overall survival, quality of life and symptom control, compared with best supportive care.

“A number of other drugs are currently being used for these patients that have been adopted by the National Comprehensive Cancer Network guidelines, including drugs like temozolomide, and, more recently, a combination immunotherapy regimen of the drugs Opdivo and Yervoy [ipilimumab],” Rudin says.

The combination of Opdivo and Yervoy has been tested in several other solid tumors and has shown improvements in outcomes for certain patients.

To treat her cancer, Beaty was enrolled in a trial for patients with SCLC who had their tumors progress after prior therapy. Called CheckMate-032, it tested Opdivo alone or in combination with Yervoy, which is a different type of immunotherapy called a CTLA-4 inhibitor. Beaty was treated on the Opdivoalone arm. Published results of the CheckMate-032 study showed that both Opdivo alone and with Yervoy had antitumor activity in patients with relapsed SCLC.

These results were similar to those from another trial also testing Opdivo with or without Yervoy that also showed that Opdivo alone or in combination with Yervoy was associated with antitumor activity and durable responses.

The KEYNOTE-028 trial tested another immune checkpoint inhibitor, Keytruda (pembrolizumab), in patients with advanced-stage SCLC that is positive for PD-L1, a ligand on the immune and tumor cells that normally binds to the drug’s target. About one-third of patients treated with Keytruda in the study had their tumors respond to treatment.

While they show promise, immunotherapy drugs can cause serious side effects, and patients on these treatments need to be carefully monitored. Nonetheless, in most patients, they are well tolerated, with severe side effects seen less frequently than is typical with chemotherapy, according to Rudin. Many toxicities that do occur are specific to treatment with immunotherapies and the stimulation of the immune system.

Although these side effects can be serious, they can usually be managed in patients with close follow-up, he adds.

“The real excitement with immunotherapy, in my mind, is when we do get responses, they can, in some cases, be quite durable,” says Rudin, who treated Beaty on the CheckMate-032 clinical trial. “Nina is coming up on two years of treatment. She has an excellent quality of life and a continued remarkable response.”

However, most patients with SCLC, like those with many other tumor types, unfortunately do not currently respond to immunotherapy. In the CheckMate-032 trial, the objective response rate was only 10 percent for patients treated with Opdivo alone, and about 21 percent for the combination group. For those patients who do respond, clinicians do not yet know the optimal duration of immunotherapy treatment. For example, Beaty has been told that she may need to continue to undergo immunotherapy infusions in the foreseeable future.

“We do have patients who have had to go off of immunotherapy because of adverse effects whose tumors have remained in remission, in rare cases for many years,” Rudin says. “We are always a bit afraid to quit when patients have good success and tolerance to a drug.”

Researchers continue to conduct studies of immunotherapy treatments in order to identify which patients will respond to therapy and to find ways of getting more patients to respond.

THE USE OF PARP INHIBITORS

Another exciting area of research for patients with SCLC is the use of PARP inhibitors. A PARP inhibitor is a drug that blocks an enzyme in cells called poly ADP ribose polymerase, which helps repair DNA when it becomes damaged. For patients with cancer, blocking PARP may help keep cancer cells from repairing their damaged DNA, consequently causing the cancer cells to die.

“In early studies, we found that SCLC has high levels of the protein PARP, and when we block it with a drug that inhibits PARP, that small cell dies,” Byers says.

One preclinical study conducted by Byers and colleagues showed an equal decrease in growth of SCLC cells using a PARP inhibitor as is seen with standard chemotherapy. When used together, the two approaches may work even better, says Byers. In another recent study, Byers, Rudin and colleagues tested a PARP inhibitor called veliparib. Patients with previously treated SCLC were treated with the chemotherapy drug temozolomide with or without veliparib. The combination increased response rates almost threefold compared with chemotherapy alone.

“We also found biomarker testing that could help us predict who would get the most benefit from a PARP inhibitor,” Byers says.

She and colleagues at MD Anderson Cancer Center, as well as several other cancer centers, continue to design and launch clinical trials investigating PARP inhibitors in patients with SCLC, along with tests to identify patients mostly likely to respond, in the hopes of getting at least one PARP inhibitor approved for the standard care of patients with relapsed SCLC.

Research into immunotherapies, PARP inhibitors, and other new treatments continue to provide promising new approaches to the treatment of SCLC, and hope to patients living with the disease.

Beaty acknowledges that she has beaten the odds by surviving almost two years since her SCLC spread outside of her chest. As a way of giving back, she has applied her background as an art therapist to work with patient support groups that help provide guidance and support to other patients with SCLC.

One of the most encouraging resources she found is a group called Imerman Angels, which provides one-on-one cancer support. Through the group’s website, patients can fill out a support request form where they can enter information such as their diagnosis, age and gender. They are then matched with someone to speak with, who has dealt with the same or similar diagnosis, about their personal diagnosis and journey.

“As a newly diagnosed person, you hear that the average survival is 3 to 6 months, and you look to find other patients with a similar experience as you and discover that there aren’t many around,” Beaty says. “A couple of weeks after contacting Imerman Angels a man called me and said he had SCLC and had survived two years. Hearing that surviving two years was possible made me burst into tears. It was the first time that I was given some hope and realized that I might have a future after all.”

Now, Beaty is the survivor, and she credits it all to immunotherapy.
Print | cure Printing...