Now that it’s legal for both medicinal and recreational use in Canada, cannabis is widely available to patients with cancer. How much it can help them is largely undetermined.
BY Pippa Wysong
PUBLISHED September 10, 2019
It’s been close to four years since Daniel Malka, of Montreal, was told he had six to eight months to live.

After eight rounds of chemotherapy and 21 rounds of radiation treatment for his stage 4 small-cell lung cancer, he not only survived but has been in remission for more than two years. The fact that he’s now doing well is some- thing Malka attributes, in part, to judicious use of cannabis along with his regular therapies. He says the plant, which was legalized in Canada for medical purposes in 2001 and for recreational use in 2018, has helped him feel much better over the past three years.

While his medical and radiation treatments helped Malka fight his cancer, they also contributed to significant pain in his affected lung and his back, as well as complications including inflammation of the esophagus, the bacterial infection C. difficile, diverticulitis, appetite disturbances, sleep problems and nausea. His daughter suggested he try cannabis, and so, with some searching, he was able to find an oncologist specializing in rehabilitation who was on board with authorizing it. 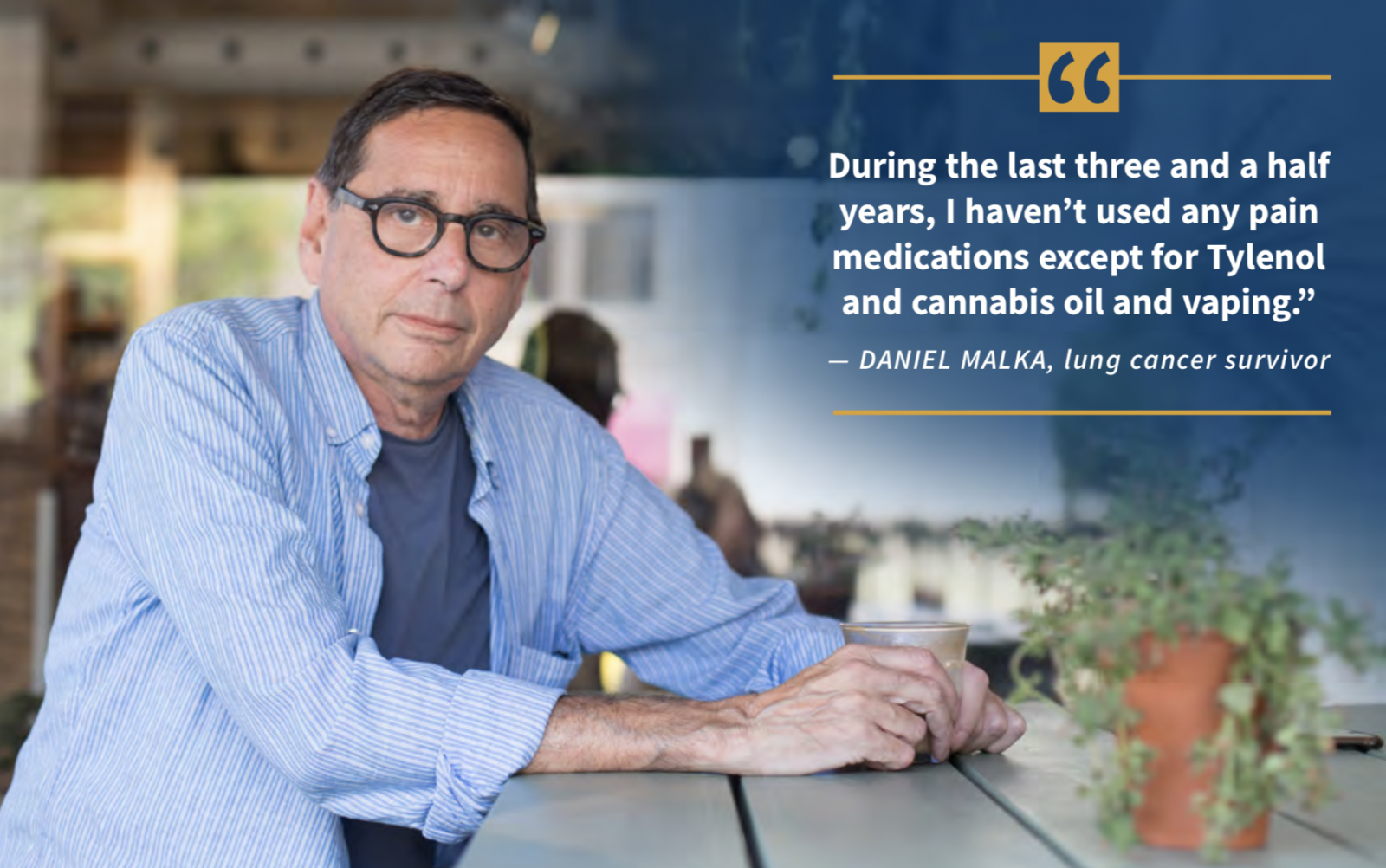 Malka says the cannabis has eased his pain enough to enable him to stay away from opioids: “During the past three and a half years, I haven’t used any pain medications except for Tylenol and cannabis oil and vaping.”

There is some scientific evidence that cannabis can ease pain, as well as nausea and vomiting, according to guide- lines for medical cannabis use from the College of Family Physicians of Canada (CFPC).

But there are a lot of unknowns with respect to the immediate and long-term effects of the drug on the body and the disease, says Dr. Marc Kerba, a radiation oncologist and clinical associate professor of medicine at the University of Calgary.

Plus, cannabis and its components can have dramatically different effects on individuals, not all of them helpful.

The bottom line is that, although cannabis is now widely available in Canada, people need guidance from their doctors to help avoid adverse effects, says Dr. Antonio Vigano, director of the Cancer Rehabilitation Program and an associate professor of oncology at the McGill University Health Centre.

WHAT IS CANNABIS?
Cannabis contains over 400 chemical compounds. More than 60 are cannabinoids, many of which have a variety of biological effects. There are also compounds called terpenes (which give a plant its scent) and flavonoids (which are antioxidants), and many of their effects are not well understood. There are varying combinations and ratios of these compounds in the wide variety of cannabis plants available. Many of the compounds have not been studied, and how each affects people is unknown — which makes it challenging, Kerba says, to sort out the details when it comes to using cannabis to treat patients.

While many anticancer medications were initially derived from plants, those plants usually had only one active compound that was extracted and purified for clinical use, such as the chemotherapy paclitaxel, which was first derived from Pacific yew tree bark. With its large number of biologically active compounds, cannabis is far more complicated.

Some cannabis compounds may interact with chemotherapy or other medications patients are taking, Kerba said. For instance, benzodiazepines, antidepressants and all other central nervous system medications may cause adverse effects when taken with cannabis.

Some studies suggest that certain cannabis compounds may help inhibit the growth or spread of certain types of cancers. In fact, Malka is convinced that cannabis is keeping his at bay.

However, other studies show that some cannabinoids may do unhelpful things such as suppress parts of the immune system that fight cancer. In fact, cannabis may interfere with immunotherapy, Kerba says, a point illustrated by a study from Israel of patients with cancer who were taking Opdivo (nivolumab): Those who were using cannabis had a significantly reduced response rate to the treatment.

Throwing more uncertainty into the use of cannabis in cancer care is the fact that patients are free to choose any formulation they want, whether recreational- or medical-grade.

Malka selects flowers from licensed producers to make his own CBD and THC oil formulas. Being a biochemist, he identified formulations he thought were best suited for his condition.

“It’s up to the patient which products they get and how they use them — which is very different from traditional prescription medications where the molecules in the product are known and standardized, as are doses,” says Ted Findlay, a clinical assistant professor of family medicine at the University of Calgary, a consultant for Alberta Health Services Chronic Pain Centre and an author of the CFPC guidelines.

HOW CANNABIS CAN HELP
In its guidelines, the CFPC does not strongly recommend cannabis to treat any side effect. It states that there is very low evidence for the use of cannabis to treat chronic pain and low-to-moderate evidence for its use to treat chemo- therapy-induced nausea and vomiting. The organization recommends that cannabis be used only when these conditions have not sufficiently responded to other treatments.

The guidelines also suggest that synthetic cannabinoids made by pharmaceutical companies, such as Cesamet (nabilone) or Sativex (nabiximols), be tried first, because their effects are better understood.

The studies on pain evaluated by the CFPC showed less obvious benefit, and it remains uncertain whether cannabis is beneficial in treating this symptom. The organization recommends that cannabinoids be used only “after patients have had a reasonable therapeutic trial of two or more established agents for cancer or palliative pain.”

But Vigano says both animal and human studies are unravelling how cannabis might help relieve certain types of pain. One way is by reducing inflammation that can cause pain. Others involve affecting pain transmission in the nervous system and altering the way the brain interprets pain. “Cannabis will help a patient to dissociate pain from their emotional reactions to it,” he said. The drug reduces the anxiety and stress around pain, which in turn reduces its impact.

Because of this, he has seen patients take less of their other pain medications, many of which have their own potential side effects.

Reducing those side effects can contribute to improved feelings of well-being, a result that was shown to be the most significant advantage of cannabis in patients with cancer attending Vigano’s medical cannabis clinic at the McGill University Health Centre.

Quality-of-life outcomes were the focus of a study out of McMaster University that looked at marijuana use among 148 patients with newly diagnosed head and neck cancer. Approximately half the patients used marijuana and half did not. Results showed that the marijuana users experienced less pain, fatigue, depression, anxiety, appetite problems and drowsiness and reported better general well-being.

More studies are needed to sort out regimens and which type of cannabis may be the most helpful to patients with cancer, Vigano says.

GETTING ACCESS TO CANNABIS IN CANADA
When patients with cancer discuss cannabis with their care teams, doctors don’t write prescriptions, Findlay explains. Instead, they write letters of authorization. These letters allow patients to purchase medical-grade cannabis products from licensed vendors.

Not all doctors can provide authorization letters. Many provinces require registration for physicians or nurse practitioners who want to give them. In addition, many health-care providers aren’t comfortable with cannabis and don’t provide authorizations. Many are concerned about potential risks or simply don’t feel they know enough.

When patients do get authorization, they should start with low doses and slowly work their way to up a dose that has the effect they want in order to minimize possible side effects, Findlay says.

It’s hard to say whether legalization of cannabis has influenced more people to “self-medicate,” but Findlay, who specializes in non-cancer pain, frequently sees patients who have tried it before consulting him for help.

A survey of cannabis use that included almost 2,000 patients with cancer, published in June 2018 by Alberta researchers, found that 43 per cent reported using cannabis at least once in their life. Four in five acquired cannabis through friends, and only 10 per cent acquired it through regulated medical dispensaries. Of the 356 patients who reported cannabis use within six months before the survey, about 36 per cent were new users, with 46 per cent of those saying they tried it for cancer-related pain, 34 per cent for nausea, 31 per cent for other cancer symptoms and 56 per cent for non-cancer-related reasons (some reported multiple reasons).

Findlay urges any patient trying cannabis to stick with medical-grade products because they are standardized and without contaminants. He encourages patients to avoid recreational cannabis products or those sold on the street and to make sure their medical teams know about their cannabis use.
Be the first to discuss this article on CURE's forum. >>
Talk about this article with other patients, caregivers, and advocates in the Side Effect Management CURE discussion group.