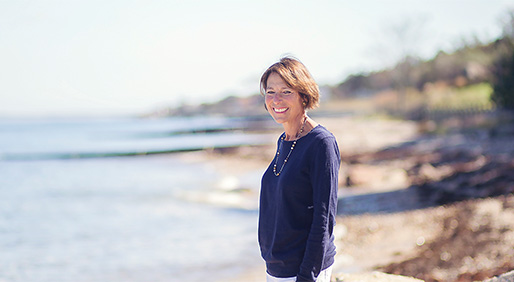 For IDE MILLS, joining a patient registry was not just about helping researchers gather data, but about feeling like part of a community. - PHOTO BY DIANA LEE
When Ide Mills first learned about the Cancer Support Community Registry, she jumped at the chance to participate. Mills, who has stage 4 lung cancer, went online at cancerexperienceregistry.org to answer demographic questions and in-depth queries about her experience with her illness, such as what worried her the most and what her everyday challenges were in living with her disease.

The registry collects information about the social and emotional experiences of cancer patients and their caregivers. Then, Cancer Support Community, a nonprofit patient advocacy group, uses the data to improve its own programs and to help enhance research and care programs offered by the health care community.

For Mills, of Maplewood, New Jersey, filling out the online form represented a chance to help someone else have a better cancer journey, but since then, the registry has come to mean even more to her. Mills not only participates actively in the registry, but is an advisor on one of its panels. She and other members of this community contribute to the study of trends, share their thoughts about research findings and help design programs that meet the needs of patients and caregivers.

“It’s important for patients to know they are not alone, and cathartic to share one’s story,” Mills says. “Most important, being a part of a larger community bonded by similar life experiences is invaluable.”

Registries are designed for the collection of data, but, unlike clinical trials, they are not designed to test drugs under controlled conditions; rather, registries look at established standards of care and choices made by patients and their doctors during the normal course of treatment. This means that registries answer different questions than clinical trials do. While a trial estimates the safety and/or effectiveness of a treatment, a registry determines whether a new treatment is being appropriately used in a population group and whether the benefits found in clinical trials are consistent with what is being observed in a more diverse population. In some cases, information is collected about a specific disease or clinical situation, rather than a specific therapy. Registries can also look for trends in cancer incidence that might be addressable through changes in health care practices.

There are two major kinds of cancer registries: hospital-based and population-based. A third type of registry collects information and data on a specific type of cancer — such as the Metastatic Breast Cancer Project (MBC Project), which asks patients with this condition, throughout the U.S. or Canada, to contribute tissue specimens and medical information for use in research.

Registries can be funded either publicly or privately. In most cases, patients participate anonymously, donating their time and information to help with research, and to be part of a community.

But those are just some of the returns that registries can bring.

Registries are the source for national cancer statistics on incidence, survival and prevalence of cancers. They are used to identify emerging trends within the population and to determine what those trends are telling us. For example, an increase in the incidence of a disease may reflect a change in risk factors within the population, such as a link between specific cancers and certain kinds of jobs.

Registry data is also used to assess the impact of cancer control efforts, such as those to reduce smoking, increase sun protection, make dietary changes or boost screening. This is also the information used to design programs that target specific behaviors.

And there’s more. Registry data may improve our understanding of the patterns of care within a population, and can help identify health disparities among population groups. On a more individual scale, it can be used to identify who might benefit from inclusion in a clinical trial.

A large and diverse number of studies have been performed using data that came from cancer registries. These studies are less expensive and simpler to run than randomized clinical trials, as they are less encumbered by regulatory red tape, although in some cases they still require subject consent and are bound by many of the same rules as trials. Still, some information can be extracted from registries and analyzed without consent of the patients, as long as all personal identifying information such as names, medical record numbers and addresses, is carefully guarded and not included in the report.

But unlike in a clinical trial that is a controlled experiment, observational data can be affected by biases, and these need to be identified, carefully considered and adjusted for analyses. For example, registry data may not indicate why a person did not receive a treatment, knowledge that would be important in linking treatments to outcomes.

Benjamin Smith, M.D., an associate professor in the Department of Radiation Oncology at MD Anderson Cancer Center, agrees that registry data may not always be accurate. He says that some registries are more reliable than others, making it important for researchers to be careful about drawing erroneous conclusions.

That’s why it’s important that certified tumor registrars — whose job is to enter data into a registry at the time of diagnosis — meet stringent standards of training, testing and continuing education so that they learn to properly compile and enter timely, accurate and complete cancer information that is in line with national standards. Tom Tucker, Ph.D., associate professor of epidemiology at the University of Kentucky and director of the Kentucky Cancer Registry, adds that software and electronic systems used by registries are valuable to the successful gathering, entering and sharing of data, and while progress has been made in this area, improvement is still needed.

One large registry that’s collecting data about a specific type of cancer is The MBC Project (mbcproject.org). Launched in October 2015, the registry is funded by the Broad Institute of MIT and Harvard and conducted in collaboration with Dana-Farber Cancer Institute and others. It offers an opportunity for patients with cancer, advocates, researchers, physicians and clinical specialists to collaborate to collect tumor samples for study.

One aim of the MBC Project is to bring more resources to an area of breast cancer that has traditionally been under-studied.

The program began with a series of conversations about what could be learned if researchers had access to specific tumor samples, says a founder and overseer of the program, Nikhil Wagle, M.D. 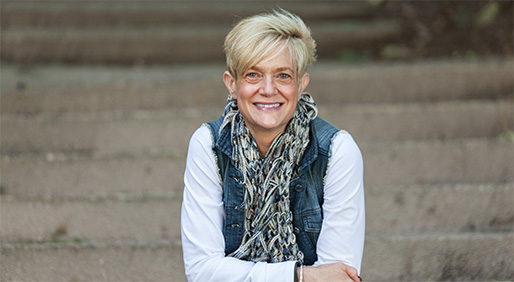 WENDY KOZEL, patient enrolled in the MBC Project registry - PHOTO BY ALYSSA CLOW
So far, more than 2,600 women are participating. Among them is Wendy Kozel, a 48-year-old Cleveland, Ohio resident who’s been living with metastatic breast cancer for the last six years. She first discovered the program online, where she signed up to contribute information about her cancer, give permission for the MBC Project to have copies of her medical records and samples of her stored tissue, and submit a saliva sample. Since then, she has become an active participant in the program’s projects, making herself available to provide information for studies.

“The MBC Project is invaluable, because it relates exclusively and directly to stage 4, or advanced, breast cancer patients, who make up about a third of all patients diagnosed with breast cancer,” she says. “Because metastatic breast cancer is so advanced, the bulk of the funding for research goes elsewhere, making this an extremely important resource for us.”

Over the next six months, Wagle says, the MBC Project plans to release its first set of data in several ways, including through the Genomic Data Commons at the National Cancer Institute (NCI), as well as through other data sharing sites.

“We are asking patients from all over the world to sign up to share their metastatic breast cancer information with us so that we can use innovative technologies and methods to study this disease that has been continually under-represented in the studies of breast cancer,” he says.

Other special cancer registries include the Breast Cancer Family Registry and the Colon Cancer Family Registry, established by NCI as resources to be used by investigators to conduct studies on the genetics and molecular epidemiology of breast and colon cancers. Known together as CFRs, the registries work to translate research into practice and to identify and characterize genes that trigger cancer, understand genetic and environmental interactions, and look for preventive and behavioral solutions in light of those findings.

The CFRs don’t fund studies, but researchers can apply for access to the data that include information on family histories, epidemiological risk factors, bio-specimens and molecular characterizations of participating families.

Government-funded cancer registries normally obtain information around the time of diagnosis, with patients being followed up for mortality outcomes to produce survival estimates, says Kathy Cronin, Ph.D., M.P.H., deputy associate director of the Surveillance Research Program in the Division of Cancer Control and Population Sciences at the NCI. That cancer registry information, she says, represents the consolidation of data from various sources that captures and reflects what is occurring in the population. These registries do not influence the course of treatment received or the implementation of study designs, but document what has already occurred.

For instance, every state has laws that mandate the reporting of all cancers, with the exception of some dermatologic cancers, to a central cancer registry that collects each patient's demographic information, including age, gender and race/ethnicity, and characteristics of a tumor at diagnosis, such as the cancer site, histology, stage of disease, some biomarkers and the first course of treatment.

It is, however, by law, the responsibility of the registry not to disclose a person’s identity.

Tucker, director of Kentucky’s registry, says that researchers might look to the registry to find patients to participate in studies. When an investigator finds someone who is potentially eligible, he or she must contact that person’s doctor to determine if the patient is very ill or has dementia and should not be contacted. If the doctor says the patient might be well enough to participate, the registry then tries to contact him or her; however, without the patient's agreement, his or her identity will not be revealed to a researcher outside the registry.

In Kentucky, the registry was used to identify the tumor tissue of 500 women who had undergone breast cancer surgery between 2000 and 2007, and then a study was conducted. These patients were traced forward in time to find out how many had experienced recurrences and how many had not. Twelve percent were found to have had a recurrence. The tissue from patients who had experienced a recurrence and those who had not was used to determine whether there were different biologic markers in the tissue of patients in the two groups. “Without the registry, that kind of work could not be done,” says Tucker.

The registry is also an essential tool in directing limited public health resources toward the most serious problems. Data from the Kentucky Cancer Registry showed that, in 2001, the incidence of colon cancer in Kentucky was the highest in the U.S., while the rate of screening for the disease among eligible state residents was found to be the second-lowest in the nation.

A statewide initiative to encourage age-eligible residents to undergo screening was implemented. A law was also passed requiring all insurers in the state to cover the cost of colon cancer screening for the eligible population. In 2002, one-third of age-eligible Kentuckians got screened; now, two-thirds regularly undergo screening. As a result of finding more precancerous polyps and discovering cancers at an earlier stage, the incidence rate has been reduced by 25 percent and the mortality rate from colon cancer was reduced by 30 percent.