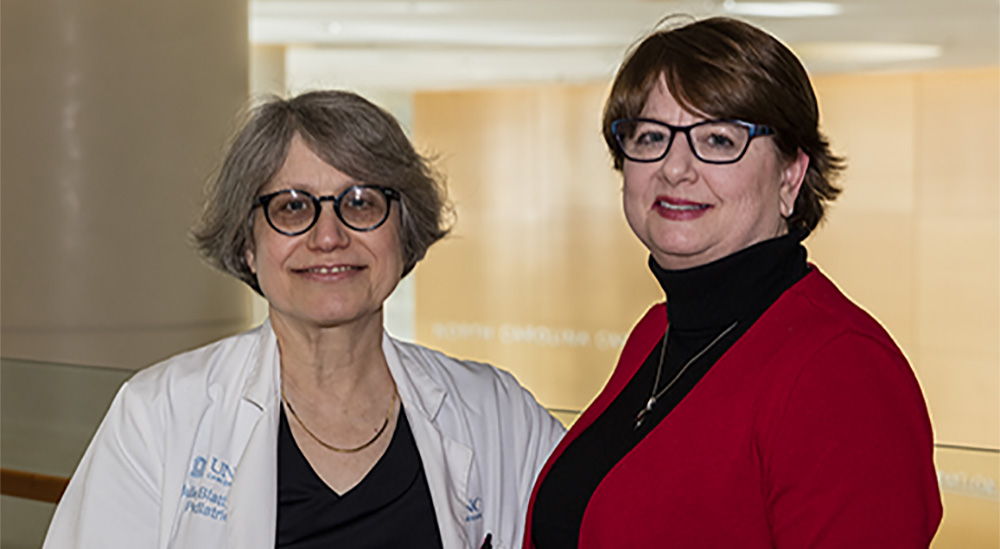 Julie Blatt, MD and Diana Gordon, RN, MSN, CPNP, CPON PHOTO BY ARTHUR GREENBERG
I am a pediatric hematologist oncologist and have worked with Diana Gordon since 2010, when she joined our team at the University of North Carolina (UNC)-Chapel Hill. As a part of her initial application to our program, we already had heard many good things about her. However, almost six years later, I can’t remember how I was able to get my part of the job done without her.

Diana exemplifies three of these four “C’s” — she is caring, courteous, comprehensive, but rarely complaining — and she sometimes makes me look bad. In 2014, UNC added the EPIC electronic medical record to our list of daily irritants, and Diana added another “C” when she became my computer advisor. In fact, she was designated an EPIC “super user” by our hospital, and helps all of us in the division to navigate an increasingly unfriendly medical system.

With all of these strengths, Diana’s tour de force still is in taking care of and caring about patients and their families. We are part of a state university medical system, and as such, our mission includes taking care of people without regard to their ability to pay or to speak English. Although I know that our colleagues at other centers in North Carolina also see indigent patients, we see more than most. Many of our families need assistance negotiating our system for help with finances, transportation, insurance pre-authorizations and accommodation in Chapel Hill when they come to us for treatments, and sometimes with palliative care. Diana attends to all of these needs while still delivering excellent medical care.

Just recently, we shared in the care of a 12-year-old boy with Ewing sarcoma whom I had been following for a number of years. He developed recurrent disease, and we had no open consortium studies to offer him. Diana worked with me to research treatment options, and over the past six months this patient has received a succession of experimental agents. Several of these required haggling with insurance companies for authorization, and Diana was instrumental in doing all of this. Throughout this time, she has continued to do the important things for this child with terminal cancer, and for his parents and brother — listening, adjusting pain medications, arranging hospice while continuing to offer hope by keeping an eye out for any new treatment options. I think this family likes me; they love Diana.

As another recent example, we shared care of a teenager with a difficult-to-treat, newly diagnosed brain tumor for which a new designer drug has shown early, but encouraging, promise. After stringing us along for nearly two weeks, we secured insurance approval for the drug. However, the supplier kept us waiting for several more days before telling us that it had temporarily run out of the drug. Somehow, after 30 minutes of listening to Diana remind them that there was a patient on our end of the phone facing a life-and-death situation, a month’s supply of the drug miraculously materialized. Maybe, like many of us, Diana secretly enjoys the small fights with insurance and pharmaceutical supply companies — but I know that it is the victories that come from all of this that give her the most satisfaction.

Diana’s efforts don’t stop at this hospital. She flies every month with our division chief to do an outreach clinic elsewhere in the state. Despite having a busy clinic there, she never misses a beat with her work at UNC. Diana also has gone above and beyond in helping with our divisional fundraising efforts. The supportive care that we give to our families — gas money, parking stickers, food for long clinic days (for the families, not us) — and our research agenda that aims for a cure for pediatric cancers, which is another divisional mission, cost money. Our annual “Pedal for Ped’s” bike ride fundraiser just held its sixth event. Diana was unstinting in donating her time as a member of our P4P6 Organizational Committee, obtaining donations for our silent auction, getting food donations for the event, working the registration desk and reminding all of us about patients to remember as a part of our “Balloon Release” memorial. She also has worked with a number of our families to organize fundraising efforts in their communities on our behalf.

Just 700 to 1000 words can’t tell you all that Diana Gordon has done for our division and for me personally as a practitioner. I can’t think of anyone more deserving to be recognized as an Extraordinary Healer.
Be the first to discuss this article on CURE's forum. >>
Talk about this article with other patients, caregivers, and advocates in the General Discussions CURE discussion group.