In CURE’s Speaking Out video series, on behalf of Living Beyond Breast Cancer, Dr. Nancy Lin discusses treatment planning for patients with breast cancer that has metastasized to the brain.

Kristie L. Kahl: Can you discuss the signs and symptoms that might be associated with brain metastases so that our patients can be more vigilant in determining when they should talk to their care team?

Dr. Nancy Lin: So headaches are the most frequent symptom that we see. And the headaches, the kinds of red flags that we have for headaches, or a change in the headache pattern or frequencies or somebody who's not really had a lot of headaches in the past suddenly has daily headaches, that's a concern. Obviously, somebody who has a long history of migraines, and the migraine pattern is the same that's less concerning. If the headaches are associated with nausea or vomiting, that's concerning. Patients sometimes will tell us that they're running into things where maybe they've had some falls, or they're having some issues with balance coordination, and that would be another red flag. And then seizures are something people worry about, but only about 10% to 15% of people with brain metastases present with seizures. So, it's not the most common presentation that we see. And similarly, a lot of patients come in with symptoms of chemo brain or brain fog. And again, that's not an incredibly common initial symptom of brain metastasis, and is a very common symptom in general in our patients so that the symptoms that we really look out for that are common are things like headaches in coordination, again, less likely seizure, but obviously that would be a concern and weakness, or other kind of focal neurological symptoms.

Kristie L. Kahl: What are the most common treatments for brain metastases, particularly in breast cancer?

Dr. Nancy Lin: Yes, so for patients with brain metastases, there's kind of three major types of treatments, surgical surgery, radiation therapy, and some sort of systemic treatment, whether it's chemotherapy or targeted therapy. And so when we look at patients who have a new diagnosis or recurrent diagnosis of brain metastases, we're trying to see whether each of those options is the right option at that one moment in time.

Kristie L. Kahl: How does the multidisciplinary approach play a role when it comes to treating brain metastases?

Dr. Nancy Lin: Yeah, I think it's really critical. So, you know, to taking the analogy from early-stage breast cancer where to get optimal care, we have people see a breast surgeon and a radiation oncologist and a medical oncologist. For patients with brain metastases, we would very frequently involve the radiation oncologist and then sometimes would involve a neurosurgeon, if there's a potential for surgery to remove the cancer in the brain. And then again, sometimes we also involve neuro oncology. And they can be very helpful in things like managing seizures, understanding symptoms, and where they might localize to. We also collaborate very carefully with neuro-oncology for patients with leptomeningeal disease. And then the medical oncologist provides the systemic therapy or recommendation. So all of these specialties are very important, and especially because sometimes we choose one over another. Sometimes we choose to combine different types of modalities of treatments. And so you really need everybody at the table to try to understand what's the best course.

Kristie L. Kahl: What is your advice on how patients can work across their care team, especially with that multidisciplinary approach that you just mentioned?

Dr. Nancy Lin: So I think a couple of key points. One is that it's important as a patient to really feel like you know who is driving your care from a medical standpoint. Obviously, you as a patient should ultimately make the decisions about what you think makes sense and to go forward with. But you want to know, because if there are multiple people involved in your care, multiple specialties, you want to know where the buck stops, and you want to know who's coordinating your care. And I think that's really important. The other is, it's important to communicate your learning style, your communication style, kind of preferences, some people want to see all their scans, some people want to be intimately involved in the decision making. Some people want to just sort of say, “Well, what do you think, doc? What do you think I should do?” And people have very different styles. And it's okay to have different styles. And it's important to communicate what your style is to your doctor. And the last thing is don't be afraid to ask questions. Don't be afraid to ask for a second opinion, if you could think that that might be helpful. I mean, my patients ask for second opinions. There's no ego here. It's just we know patients want to have the best treatment options offered to them, and we want that for our patients too.

Kristie L. Kahl: What is your advice on how patients can work across their care team when it comes to treating their brain metastases?

Dr. Nancy Lin: Yeah, so there's a few key points. The first is that it's important as a patient to know who is driving your care who's coordinating your care. Obviously, as a patient, you have the final word, and you're going to be the one who makes the decisions about what to move forward with or not. But you really want to know when there's multiple people making recommendations. Ultimately, who is the person coordinating your treatment and your care, because you need to know where the buck stops, so to speak. The second thing I would say is to communicate to your treatment team, how you like to get medical information and how you like to make medical decisions. Some people want to see every scan, and they want to be intimately involved in every decision. And some people are a little more hands off and would like to let their doctors drive their care, and people are in between and there's no right or wrong. And it's really just a matter of what's your style. And if we know your style, I think we can better communicate with you as a patient. And the last thing is not to be afraid to ask for second opinions to ask about whether there's clinical trials that might be available. Even my patients will sometimes ask for second opinions. I'm more than happy to send them all recommendations of who they could see. You know, I just think it's very important to be able to explore all your options. 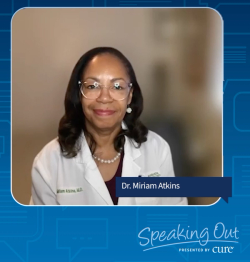