Hossein Borghaei, DO, MS: I’m going to come back to our physicians. Ms. Ferris, I’m going to need your input in the next section also. I want to start talking about all the barriers we’re facing and all the difficulties you’ve touched on. Let me start with Dr Lori Wirth on the accessibility for biomarker testing. We’ve talked a lot about physicians who do it. There are some physicians who maybe aren’t doing it, but is it that they don’t have access to it?

Unfortunately, doctors are busy, and it’s hard to find the time to do the research on a disease they may not know a lot about. You don’t know if biomarker testing is indicated in an advanced thyroid cancer off the top of your head if you’re a community physician. The points about patients needing to be advocates for themselves are good points, but don’t be afraid of your doctors. Don’t be afraid of saying, “Wait a second, I have this really important question.” Don’t run out the door. “I’ve got one more question left.” We’re all human beings, and you can ask us anything. Don’t be shy about saying, “I want to get a second opinion. Whom do you recommend?” We’re all grown-ups. If I’m uncomfortable with my patient getting a second opinion, that’s my problem. Everybody deserves a second opinion. There are so many resources that are out there as well. Patients can get online second opinions at a center of excellence no matter where they live. Those resources are available. There are also the patient advocacy groups like LUNGevity that are great. There’s a patient advocacy group called ThyCa [Thyroid Cancer Survivors’ Association] for people with thyroid cancer that’s a wonderful source of information.

Getting back to the barriers, one of the things that’s really difficult for a clinician to know is the best test to order. There are several commercial assays out there. If you don’t know, just phone a friend and we as experts in the field are very happy to be emailed, to be paged, to be contacted with a quick question like that. The clinicians shouldn’t be shy about acknowledging the fact that they don’t know everything about every single disease, in every single patient that walks through their door. When it’s important, you stop and find the information you need as quickly and as thoroughly as possible.

Hossein Borghaei, DO, MS: Dr Levy, what kind of barriers do you encounter and how do you address some of the issues regarding insurance coverage and lack of payment or those kinds of issues that we hear in clinic sometimes?

Benjamin Levy, MD: I would define the barriers in several ways. One is they’re probably resource barriers in some health systems. We’re a well-oiled machine here [at Johns Hopkins Sidney Kimmel Cancer Center]. I’ve got a nurse navigator. I’ve got a pathologist who’s well informed. We have companies we partner with when we don’t do it in house. We’re fortunate. There are health systems out there less resourced that may not be able to do or execute in the same fashion that we are when it comes to molecular testing, there’s no doubt about it. And hopefully we can partner with some of those health systems, at least in Washington, D.C., and north, between Baltimore and D.C., to get some of these health systems the resources or the education they need.

The second issue comes down to education. It’s a lack of knowledge in terms of the testing. It’s either not done even if you don’t have the resources or the tissue is sent to the wrong place or to a company that’s not doing the right testing. I see this a lot in my second-opinion clinics—a patient had molecular testing, and it was done at a company. I personally don’t have a dog in the fight with companies, but there are some platforms that are just single-gene tests that aren’t optimal. That’s the second barrier.

The third barrier is one that’s a little more everyday clinic, which is that when we’re doing tissue biopsies, we know even in the best of circumstances that tissue is not perfect. Even when we try to get enough tissue, and even when the pulmonologist calls me and says, “How much tissue do you want,” and I say “a boatload,” and they get it. It’s not enough sometimes. Those are all the barriers that I see for molecular testing. A lot of these are solved by liquid. I don’t want to go back to liquid so much. It’s not the be-all and end-all, but some of these things are solved by liquid. Still, there are barriers. This is why the No One Missed campaign is going on. Andrea Ferris and LUNGevity have looked at this. We’re not doing a good enough job in this country of making sure that every patient with lung cancer has comprehensive genomic profiling. We need to do better.

Andrea Ferris: I agree with that. Going back to what Dr Levy said at the beginning: It takes a village. It really does. Initially, many companies that were developing the therapeutics would look at patient advocacy groups and say that you need to educate patients about biomarker testing. Our attitude was we can absolutely do that, but if their doctor says no, it’s like banging your head on the wall. We had to look at it more from a systems approach: what some of the obstacles are, to Ben’s point. There are many. Everybody needs to do it, but a lot of it stems from the fact that the science has—and thank God for it—far outpaced the medical practice, people who went to med school 20 years ago or 30 years ago. It outpaced the regulatory environment in many respects, and it’s outpaced the reimbursement, CMS [Centers for Medicare & Medicaid Services], and others on how to pay for these things. We’re still fighting that.

There patient advocacy groups and others working on the policy side of things, the reimbursement side of things, looking at how you re-educate. In our case, the pulmonologists and interventional radiologists, people who are pulling the tissue to make sure that instead of getting the tissue and doing as little damage for confirmatory diagnosis, to now pull as much as possible to be able to do all these tests. That’s a big thing. On the pathology community, we’re working to create CAP [College of American Pathology] Guidelines for how you handle the tissue from when you take it out of somebody’s body to the point when it gets to the lab. Because how it’s preserved and handled along the way will determine whether the lab can do the test. So there are a lot of very nuanced aspects to these barriers that go well beyond just the education element of it. But we all have to work together to resolve them like that.

Hossein Borghaei, DO, MS: You definitely are pointing out a lot of issues that we’ve been dealing with for quite a while when it comes to molecular testing. 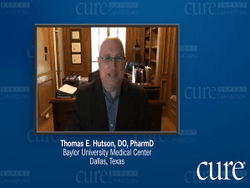