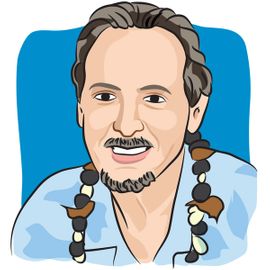 Khevin Barnes is a Male Breast Cancer survivor, magician and speaker. He is currently writing, composing and producing a comedy stage musical about Male Breast Cancer Awareness. He travels wherever he is invited to speak to (and do a little magic for) men and women about breast cancer. www.BreastCancerSpeaker.com www.MaleBreastCancerSurvivor.com

"The best way to predict your future is to create it." - Abraham Lincoln

Your oncologist may have a plan for your future. Your radiologist and your primary care physician likely have thoughts about the implications of your medical prognosis. Your children and your spouse and your aunt Margaret and even your hair dresser have well-intentioned ideas to share, perhaps as a way to ease their own anxiety and the unpredictability of your cancer.

What's a cancer survivor to do? Not long after my male breast cancer diagnosis, I began to wonder how we can decide whom to trust with our health and healing, and perhaps our lives? What I've learned after four years post-cancer is that the final decisions — the ultimate guidance and the voice of authority – comes from the patient.

When we are diagnosed with cancer of any kind, we're suddenly thrust into a discussion with all those who care about us and our future, and it's a conversation that is often difficult to translate.

Until you experience the impact of cancer yourself, it's hard to even imagine the dizzying thoughts and concerns that go along with such a huge shift in what was once a routine sort of life.

Cancer changes everything. I often think of my own breast cancer as a kind of window into the deepest beliefs I have about life and mortality. Certainly, I have some of the usual fears of recurrence and the pain of mastectomy scars and all the rest that is part of this disease, but when I stop and listen to the inner dialogue that runs through my head, I'm often surprised by what I actually hear.

When I was diagnosed with male breast cancer in May of 2014, I had two thoughts that surpassed all others. The first was to get quickly into a setting that had more stability for my wife and me. We were both finishing up a yearlong stay in Hawaii and we had timed my retirement and sold our home in California to make that opportunity work for us. I loved being in Honolulu, but my family was 2,500 miles away and I thought we needed a home base to hunker down in to be better prepared to address my cancer.

But I also had plans for the future and suddenly those plans were shaky at best. I began to prioritize my hopes for the coming days, and looking for a balance between what I could do in the remaining months that I most likely had and the years that I hoped for. My stage 1 diagnosis was promising news, but my particular cancer was a fast growing, aggressive form of the disease, so nothing was certain.

It's interesting to hear what other cancer survivors have told me about their own plan of action after being diagnosed. It seems that most of us have an idea of how we want to spend our final days, if, indeed, our days are limited by a life-threatening disease. Such is the mystery and murkiness of cancer.

But within hours of me sharing my cancer diagnosis came the onslaught of thoughts, ideas, suggestions and recommendations from all of those folks that I mentioned earlier, and I have to admit that in those first few weeks, it was nearly impossible to hear my own voice.

After the second opinions, internet perusing and the soul searching, I decided on a plan of action. And although it was not what my two oncologists recommended, it was ultimately my own choice, my own voice, based on careful research, important statistics and my own intuition.

It's important to note that when I refer to, "finding my own voice in the cancer conversation" it doesn't mean we're ignoring the advice of others. It simply means being 100 percent satisfied with the choice we make and never looking back.

We can't control our future, of course, especially when a life-threatening disease is part of it. But we can certainly guide it.

Comedian George Burns made plans for his 100th birthday by signing a contract to perform at Caesar's Palace in Las Vegas on that occasion. That contract was signed many years before he became a centenarian, and he actually lived to be one hundred years old. Perhaps that was the sort of commitment he needed to pull him through.

The message in all of this may simply be to listen to our own voice; set our goals and make our plans despite our cancer. At least we'll have a clear vision of what we hope for, and then we can turn our attention to living right now, this very minute.