Recent research found that patients under 50 were less likely to have a treatment-determining biomarker than their older counterparts.

Molecular makeup may differ between age groups of patients with colorectal cancer, according to research conducted by Aaron Franke, M.D., incoming hematology/oncology fellow at the University of Southern Florida/H. Lee Moffitt Cancer Center.

There has been an increase in colorectal cancer in younger populations in recent years. However, in research Franke conducted through the GI Oncology Department at the University of Florida, it was found that biomarkers, such as microsatellite instability-high (MSI-H) status, are seen less frequently in patients under 50 years of age. When it comes to the over-50 population, previous research found that less than one-third of these patients are undergoing genetic testing, although they may be more likely than their younger counterparts to test positive for MSI-H, which can have important treatment and prognostic implications. 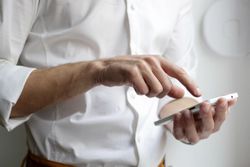