Imbruvica (ibrutinib) continues to demonstrate benefit in patients with chronic lymphocytic leukemia (CLL) who had at least one prior therapy, according to a four-year follow-up of the RESONATE study, which compared the BTK inhibitor to Arzerra (ofatumumab).

Imbruvica (ibrutinib) continues to demonstrate benefit in patients with chronic lymphocytic leukemia (CLL) who had at least one prior therapy, according to a four-year follow-up of the RESONATE study, which compared the BTK inhibitor to Arzerra (ofatumumab).

At a median follow-up of 44 months for the Imbruvica arm, the progression-free survival (PFS) was significantly longer for Imbruvica compared with Arzerra, at a median PFS not reached versus eight months (three-year PFS 59 percent vs 3 percent), with significant benefit across subgroups. The PFS with Imbruvica for the 11q deletion subgroup reportedly had the most favorable outcome; however, it was not statistically different for patients with 17p deletion or 11q deletion or without these abnormalities.

At the time of analysis, 68 percent of patients randomized to Arzerra crossed over to Imbruvica. The overall survival (OS) rate for Imbruvica at three years was 74 percent. The overall response rate (ORR) with Imbruvica was 91 percent, with complete remission (CR)/CR with incomplete platelet recovery rates (CRi) — now 9 percent — increasing over time.

Can you discuss the updated findings from the RESONATE study?

John C. Byrd, M.D., D. Warren Brown Chair of Leukemia Research, professor of Medicine, Medicinal Chemistry and Veterinary Biosciences, director, Division of Hematology, Department of Internal Medicine, The Ohio State University Wexner Medical Center, was the lead author of the long-term findings. In an interview with CURE, Byrd shed light on the game-changing efficacy of Imbruvica in CLL.The RESONATE study is the first randomized phase III study that reported out the first-in-class irreversible inhibitor Imbruvica. This was a randomized trial that compared Imbruvica in second or greater line to Arzerra, a standard of care for patients with CLL at that time. Patients were randomized to one or the other therapy; at the initial part of the trial, there was not a crossover. After it was clear that Imbruvica had significant activity, loss of equipoise existed for the control, and a crossover was allowed. What was presented at the 2017 ASCO Annual Meeting was long-term follow-up — a median of 45 months for most patients and, for some patients, out as far as 4.5 years.

The results continue to show the response over time with Imbruvica. The ORR is currently 91 percent. There is a slight increase in complete remissions; most notably, the short-term results of progression-free survival (PFS) and overall survival (OS). The PFS at that median extended follow-up time still has not been reached for all the genetic groups. It appears that the 11q deletion group is doing the best. Although, when you look at all of the genetic groups of patients enrolled on the study, we still see all groups doing well and not statistically different.

With any new drug that’s given for a long time, we worry about toxicities emerging. What has been quite remarkable with long-term follow-up is that the toxicities being seen are very similar as to what was seen in the phase II study. There is an increased risk of atrial fibrillation with Imbruvica, increased bruising, bleeding, and rash, but those really have not increased over time with the initial report.

How does it feel to see the impact of Imbruvica unfold after this many years?

Are there any unanswered questions with Imbruvica?

The only thing that has been notable are the infections over time that decrease—which likely suggest that Imbruvica is improving the immune system for which there are emerging data coming out in several publications. All in all, this study is showing that for patients with relapsed CLL, Imbruvica remains a game changer for this disease. It is now approved for upfront therapy, as well, and as time goes on, we are going to see this penetrating for patients with CLL receiving this therapy. We have had to add a survivorship clinic on because we have so many people that participated in RESONATE and in other studies. Many of these patients would not have been with us now who are living their lives, coming to see us every three months, taking their medicine, and really getting on to do impactful things that are affecting other people’s lives. It sort of magnifies the effect that the drug helps the patient; it refocuses them. Some of these patients just do great things. All of them have found a second life and it’s great to be part of a team that contributed to that. We have a lot of things we have to focus on. We have learned from RESONATE and RESONATE-2 that, as you move Imbruvica earlier into the treatment course of CLL, the remissions not only remain as durable or more durable, but we are seeing very few relapses in that setting—even among the high-risk patients. This is a similar story that we lived through with Gleevec (imatinib) in chronic myeloid leukemia (CML) in the late 1990s, in which refractory patients were treated and did not relapse.

How does Imbruvica effectively work in high-risk patients with CLL?

Can you shed light on the combination regimens being explored with Imbruvica?

When it moved into the frontline setting, resistance became a much smaller problem. We nonetheless still have the problem of resistance. Approximately 85 percent of people will relapse with a very identifiable molecular aberration that you can detect in the blood up to 9 to 12 months before it occurs. We can change the whole paradigm if you are getting monotherapy with Imbruvica rather than treating you with a continuous drug until your disease comes back and you get sick, versus identifying that you have a problem coming down the road. It is sort of like a tornado that is 30 miles away and being able to intervene—getting a “storm cellar” with another therapy by adding to Imbruvica to get rid of that small resistant clone before people get sick. This is different than the paradigm we have had in blood cancers and other cancers where you treat people, they get better, and then you wait until they relapse to initiate another therapy where they’re often sick. In terms of response, there really are no high-risk patients because Imbruvica essentially works — and other second-generation BTK inhibitors work — in virtually all patients with CLL. If I see a patient that gets Imbruvica and they don’t respond to it, I question whether they have Richter’s transformation (RT) or something else. They don’t have CLL. Where you get into trouble with monotherapy with Imbruvica, and maybe a little bit less with some of the second-generation BTK inhibitors, is that a subset of them will develop resistance either manifested as RT in the first year or year and a half, or later develop resistance mutations. The strategies that are being employed are using combinations, like what we do in other cancers, which is the best way to prevent a cancer that is prone to developing resistance. There are really two classes of a combinations. One derives from Imbruvica changing the immune system and making both CLL less immunosuppressive and making patients’ T cells work better. An abstract presented by the University of Pennsylvania, derived from work we did with them collaboratively, shows that when you give Imbruvica and then isolate chimeric antigen receptor (CAR) T cells, then the CAR T cells in that setting are more healthy. You can generate them better and when you give them back to patients, they get much better responses than what was previously reported in those who received chemoimmunotherapy. The follow-up on this study is short, but over 70 percent of patients in this small pilot study had a CR. That’s the immune-modulating effect with Imbruvica and it is an exciting direction for combinations.

The other exciting place is giving this with other active drugs like Venclexta (venetoclax) and Gazyva (obinutuzumab). Jeffrey Jones, M.D., from our institution presented a phase 1 study showing that this can be safely done. We finished the phase 2 study in terms of enrollment and these data will be presented at the 2017 ASH Annual Meeting. If the results follow what we saw in the phase I study with high CR rates, and a large number of patients get to minimal residual disease—negative status, the results of these regimens combining Imbruvica with the immunomodulatory agents represent an exciting area. We are really at a neat place in CLL where we have a lot of ingredients for the recipe, and it’s just a matter of coming up with the right recipe to make the best cake to cure the disease.

Recent data have shown that for patients who can handle two targeted agents, there is opportunity to break from Imbruvica therapy within years.

Can you give an overview of the integrated analysis of three phase 3 studies on the outcomes of Imbruvica-treated patients?

The data coming out with stopping therapy is very early and is of small patient numbers. The field is going to have to get a handle on our understanding of the patients in whom you can stop and observe where the disease may not change versus those we stop and they are going to develop aggressive disease within a short time period. There are patients who fall into both groups when you stop therapy. That is going to be the series of questions that we answer in the next large phase 3 studies that examine genomics and trying to figure this out. The CML studies that looked at discontinuation, some of which we are foreign to, didn’t really start until 10 years after Gleevec was on the market and being used in upfront patients. It is possible that there is going to be a subset of patients who did do this outside of clinical trials that could be harmed. The studies show that there are low-risk groups. If patients are over the age of 65, have non-complex, non-17p deletion CLL, and received less than two regimens of therapy, your likelihood of progressing on Imbruvica is pretty close to zero. You are more likely to develop intolerance of Imbruvica—at 10 percent to 15 percent. Whereas, if you’re a 17p-complex karyotype, your cumulative risk to relapsing is approximately 5 percent to 10 percent per year. With extended follow-up it looks like those patients on continued monotherapy are continuing to relapse.

Can you discuss the 11q deletions and IGHV mutations as biomarkers?

These patients, though, for the most part, were very heavily pretreated and we didn’t have other options [for them]. If you move it to the upfront setting and you have these risk factors [will this change outcomes]? The clinical findings with the phase III studies—the ALLIANCE study and German CLL Study Group—will be able to address that questions. Getting back to what we were talking about before, all of the papers that are coming out with Imbruvica that sort of focus on relapse and heavily pretreated patients, we will see that the role of how this moves to the upfront setting is going to be much less. What these studies are showing for heavily pretreated patients is that if you just have an 11q deletion, you don’t have a complex karyotype. If you have IGHV-unmutated disease and you don’t have a complex karyotype for 17p, your risk for relapsing from Imbruvica is much less than with 17p CLL.

We have to stay focused in CLL and not fall back and be comfortable with the great targeted agents that we have—to lose our mission that we can leave patients on continuous therapy and not look for therapeutics and therapeutic combinations to cure the disease and address areas of unmet need such as RT. One of the things that I see from funding agencies is a lot of people saying, “Well, CLL is fixed.” We are definitely at a great place, but there is still a lot more work to do.

Assessing Both Sides of the Argument for In-Home Cancer Infusions 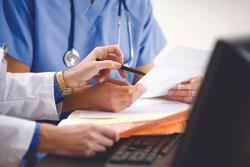