Head and Neck Cancer: Through the Eyes of a Patient - Episode 3

Meryl Kaufman, M.Ed., CCC-SLP, BRS-S: Dr. Brook, can you please share your story about your cancer diagnosis in 2006 and the treatment that followed and also the subsequent surgery that you went through?

Itzhak Brook, M.D., M.Sc.: Once I learned I had cancer and my doctors removed it when they had to biopsy, I needed to receive radiation therapy. I did not get any chemotherapy, and the radiation therapy lasted six weeks, five days a week. It was very difficult to experience the radiation, and the side effects start to accumulate within a few days. And I had to deal with inflammation of the mouth, mucositis, difficulty in swallowing and pain in my throat, and I experienced a burning of the skin around the area of radiation, weakness and then difficulty maintaining intake of food. After a while, I could lose weight, and I tried to persevere because I knew that I had to receive the treatment to get better and soldier through it until it was over.

Meryl Kaufman, M.Ed., CCC-SLP, BRS-S: Exactly. And some people have such severe side effects from the radiation that they actually require a feeding tube to support them during their treatment. In that case, often patients are encouraged to eat and drink and use that feeding tube to supplement what they’re able to eat and drink. Did you find that there were certain foods that were difficult for you to swallow and you needed to avoid during that time?

Itzhak Brook, M.D., M.Sc.: I was fortunate that I was able to maintain my hydration and nutrition without the feeding tube. And in my trial and error, I found solid food, cold food, such as watermelon, ice cream and sour cream. I tried to consume high-calorie food so that even though I don’t eat as much, I would still take calories in and not lose a lot of weight. I was lucky I lost only 5 pounds, but some people lose more. The most important thing is to stay hydrated, get enough food and get enough water, which at that time was a real challenge, as the nausea increased over time. But fortunately, I had a very good support system in the place where I got it. I had a radiation oncologist who had advised me and told me and helped me cope with the side effects.

Meryl Kaufman, M.Ed., CCC-SLP, BRS-S: Exactly. And how important was your support system at home? Who supported you and helped get you through that treatment?

Itzhak Brook, M.D., M.Sc.: Obviously, that’s very, very important. My wife and children were very supportive of me, and they knew that I was going through a rough time and tried to help me in all the other ways possible. Also, at work, I got a lot of understanding and support from my team of co-workers. I was then in the military. I was in the U.S. Navy and got my treatment at Walter Reed, and they were very, very helpful in trying to ease it.

Meryl Kaufman, M.Ed., CCC-SLP, BRS-S: And then when the cancer came back, you faced a laryngectomy. Can you talk to us about what that meant to you and what sort of associated fear and stigma you experienced?

Itzhak Brook, M.D., M.Sc.: Well, the most important thing was that they caught the cancer, and that was because I saw an otolaryngologist every month, and this is done for the first year and second year because that’s the time when more recurrences happen, in those two years. And when the cancer was diagnosed, they tried to remove it through an endoscopy and direct biopsy, but it was already too difficult, as it had gotten into the areas where simple procedures couldn’t work. And then they realized that I needed an experienced physician to do it, and I went for a second opinion to another otolaryngologist in a different city. And he referred me to another one because he felt that person would be the best to do it.

And fortunately, we have fewer laryngectomies today, partly because of the experience in doing it is less prevalent and you need to find what I found: the person who knew it best. And they finally removed it, but the understanding that I needed laryngectomy was very difficult. I suddenly realized that my voice would be lost, and I like to speak. Like anyone, I like to lecture, and accepting that I would have to lose my voice was very difficult. I remember that as a medical student some 50 years ago, when I saw laryngectomies, I said to myself, “If I ever have to make a choice, I would never give up my choice even if it cost me my life.” But once I had a choice and I also understood that I could still speak—differently, but I could speak—I made the decision very quickly. There was no doubt in my mind that in order to stay alive, I was going to do it, and I don’t regret it.

Meryl Kaufman, M.Ed., CCC-SLP, BRS-S: That’s so important for people to understand that there is life after laryngectomy or glossectomy, in the case of having your tongue removed or part of your jaw. There is life, there is rehabilitation and there are ways to go about learning how to speak and swallow again in the face of these challenges. What is something that you wish you had known prior to the diagnosis or during that time period that you can give to other people facing the same situation?

Itzhak Brook, M.D., M.Sc.: I wish I had known that I needed to go to the best physicians who are experienced in the field to do the procedure, and I should not have avoided to make the decision right away but take the time to search for the best person who could help me. I also wish that I had known that even though I was prepared for the procedure, my physicians, nurses and speech pathologists did prepare me, helped me, and they explained to me that experiencing this is completely different from all the words and explanations. And it’s still a very difficult period to undergo this major surgery and be in the hospital completely helpless. But it was worth it because even though it was difficult, I got my life back, and I still believe that life is a very, very precious thing. And if you need to lose something to gain life, it’s worth it. 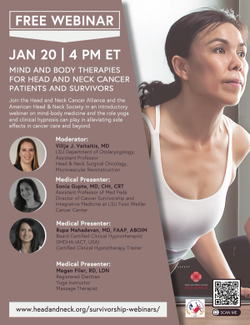