Texas Rangers third-base coach Tony Beasley teams up with Fight CRC, sharing his journey into survivorship and inspiring others in their fight against cancer.
BY Kristie L. Kahl
PUBLISHED January 25, 2018 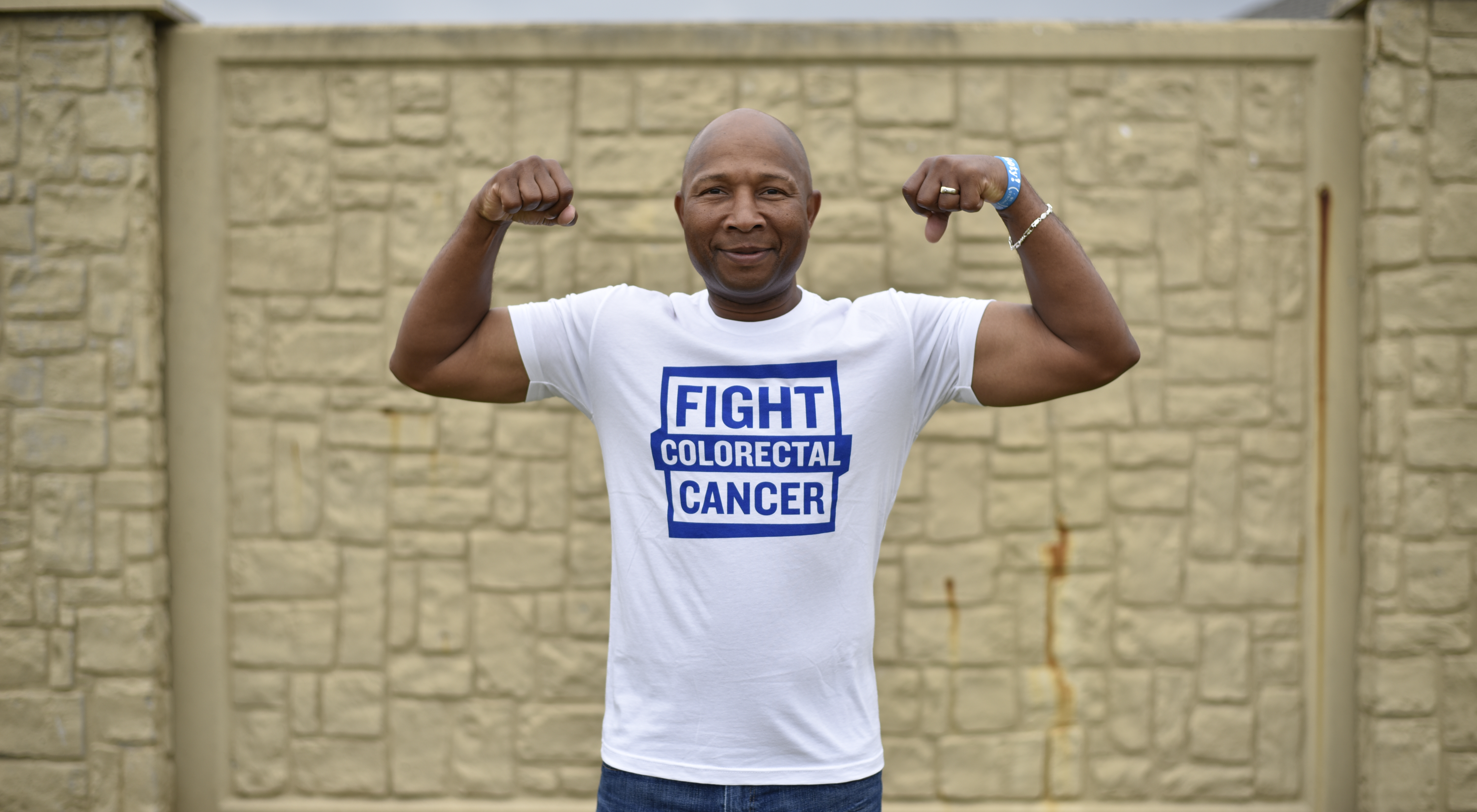 Tony Beasley - PHOTO CREDIT @BenTorresPhoto/Fight Colorectal Cancer
Tony Beasley has spent years in Major League Baseball making split-second decisions as a third-base coach, working to signal runners from second base toward home plate in the most critical moments of any given game. Little did he know that his critical thinking and competitive nature would come into play in his own life.

In January 2016, Beasley, who coaches for the Texas Rangers, was faced with a stage 2 colorectal cancer diagnosis, leaving him with one crucial decision to make — how to fight the disease. His answer? With strength and tranquility, support from his wife and son and, most importantly, with his faith.

Cancer-free since December 2016, Beasley has one thing left to do: tell his story.

“I went through (my experience) with joy and peace, and not with any negative thoughts or any sense of fear of what could have happened,” he said in an interview with CURE®. “I want to be able to encourage other people going through cancer of any type, and help them to develop a mentality to fight.”

Paying Attention to Your Body

Toward the end of the Texas Rangers’ season in 2015, Beasley, who was 49 years old at the time, noticed that things didn’t feel quite right with his body. First, he began to develop hemorrhoids — something he had never experienced before — as well as sporadic blood in his stool.

After speaking with the team doctor, Beasley was told he had three hemorrhoids and that one was likely bleeding, but that they would subside, which they did for a short while.

However, in the off-season, his hemorrhoids continued, and Beasley started to feel a sharp pain down the right side of his leg. So, his wife finally urged him to visit a medical practice in Richmond, Virginia, where doctors conducted a colonoscopy to evaluate the situation.

It was then that physicians discovered a tumor that ultimately led to a stage 2 colorectal cancer diagnosis.

“So, from that point on, it kind of changed a lot of things in my life,” says Beasley. “I went from a guy who was healthy and athletic, worked out and felt great about my body, to all of a sudden being in a battle with cancer out of nowhere.”

Upon learning of his diagnosis, Beasley had only one thought: “Let’s just beat it.”

“I went into fight mode,” he recalls. “When a lot of people hear the word cancer, they kind of think that it is a means to the end. … and I thought, ‘I am not leaving my wife and my son yet. It’s just not going to happen.’”

So, Beasley started treatment with rounds of chemotherapy and radiation, all of which he received at The University of Texas MD Anderson Cancer Center in Houston, Texas.

He found that physicians there had an unusual philosophy: His oncology team told him they would focus on defeating his cancer, rather than on the stage of his disease. Although Beasley had never heard of this approach before, he not only accepted this frame of mind, but fully embraced it.

“It was a strange analogy, but for me it made a lot of sense,” he says. “What good does it do to tell someone they have stage 3 or stage 4 cancer? Because then they think they are going to die. You diminish their ability to fight mentally. And so, (the doctors at MD Anderson) said, ‘We don’t believe in telling patients that. We just believe in diagnosing the situation and attacking it.’ I thought that was tremendous, and I believed in that, as well.”

In addition, something his doctor said pushed Beasley to gain a sense of normalcy during treatment. “He said, ‘You don’t have cancer, cancer has you, and remember that. You take the fight to cancer and don’t let cancer have control over you.’ That was a very important statement, because that was where my mind was, anyhow.”

Beasley continued to work while going through treatment. He even made it to the ballpark with the chemotherapy drip pump still attached when he had undergone treatment the same day.

He refused to change his lifestyle or succumb to any of the usual side effects, telling himself, “I’m going to maintain the same sense of normalcy in my life, and I am going to do the things that I was doing before, because the only difference between the day I was diagnosed and the day before that is that I knew something that I didn’t know before.”

In particular, Beasley says he focused on the fact that his cancer was something that would, one day, be over, and that it would never defeat him. He focused on controlling the treatment process rather than letting it control him.

Last, Beasley focused on taking things one day at a time. “Everything was: ‘I am going to win today, and we will win the next day when we get to it.’ It was one day at a time,” he says. “And basically, in life, we say that the only thing we have is today. We only have this moment, because tomorrow is not promised yet. So, let’s enjoy right now, let’s stay in the moment and let’s win this moment. And that is what I did. I tried to win the small battles every day.”

In maintaining a tough mentality throughout his fight against colorectal cancer, Beasley says he found the most strength through his faith.

“It was time for me to live within my faith. It was an opportunity for me, not an obstacle, to be who I said I am, and find out things about my life I never knew. So, I embraced the challenge of going through cancer and dealing with cancer.”

On the Friday before his very last surgery that was scheduled for the following Monday, Beasley had CT scans to evaluate his tumor before it was removed. It was then that his doctor, George J. Chang, M.D., told him the tumor still appeared to be significant and of concern, and that Beasley might have to wear an ostomy bag permanently.

The surgery lasted seven-and-a-half hours. During this span of time, Chang updated Beasley’s wife with some great news: The tumor that had caused significant concern only days before was pretty much gone, and simply reduced to scar tissue.

“It was this amazing thing, and I believe that was the work of God. From Friday to Monday, there was nothing that could have happened medically; it’s just that things happen spiritually,” says Beasley.

Since that surgery in April, Beasley had one more procedure to remove the temporary ostomy bag that doctors had warned could be permanent, and has since been fine.

“I just believe that when we want something to happen in our life, a lot of it is up to attitude and what we allow our mindset to be, our thought process to be, and how we are going to go about achieving the outcome that we want,” he says. “That was my journey.”

Through his journey, Beasley learned what is most important to him in life: his wife and son, and his time spent here on Earth.

"It is amazing that you can go through the toughest time of your life and it (can) be the best time of your life,” he says. “Sometimes we find ourselves in the middle of nowhere, but sometimes, in the middle of nowhere, we find ourselves, too. I think that it was important how I went about it and how I was going to get through this, and now I can inspire someone else.”

To help with this initiative, Beasley has teamed up with Fight Colorectal Cancer (Fight CRC; fightcolorectalcancer.org), a national advocacy group that seeks to find a cure.

As part of Fight CRC’s One Million Strong movement, Beasley is sharing his journey through the Let’s Fight campaign to highlight how important it is to pay attention to your body, and to maintain a positive attitude, despite a cancer diagnosis.

“I hope my story will inspire someone and help someone to understand that they can get through the process of dealing with cancer, and I hope it will encourage people to get early screenings and check things out — not to ignore the signs of what their body is telling them. I just hope it can inspire someone to have hope and to go through the fight that they have to go through with grace and joy, and with confidence you can win.”

Continue the conversation on CURE’s forum. >>
Talk about this article with other patients, caregivers, and advocates in the Colorectal cancer CURE discussion group.