For decades, research into bladder cancer treatments was stagnant, but now science has moved into a period rife with new approaches — immunotherapy chief among them.
BY Arlene Weintraub
PUBLISHED September 27, 2016 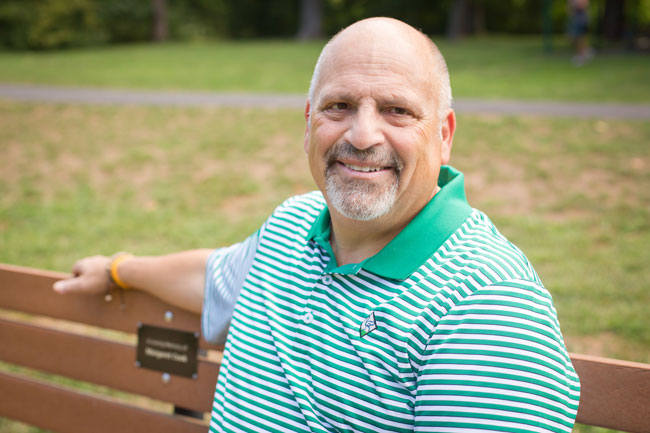 “It’s keeping the cancer in check. I have a good quality of life.” - Lou Pagano, patient
When Lou Pagano learned in early 2014 that the cancer that had started in his bladder had spread to his liver, spine and some lymph nodes, he vowed to do everything he could to beat the disease.

Chemotherapy helped to shrink his tumors, but side effects such as neuropathy and fatigue were hard to endure, and new metastases were forming. Then, in the fall of 2014, Pagano entered a trial of a new drug, called Tecentriq (atezolizumab), which is designed to embolden patients’ own immune systems to fight their cancers.

During the trial, Pagano received a 30-minute infusion of the drug every three weeks at the Sidney Kimmel Cancer Center at Jefferson in Philadelphia. His tumors stopped growing, and he was amazed that, aside from a bit of cramping in his hands, he seemed to have few noticeable side effects from the drug. Tecentriq was approved by the U.S. Food & Drug Administration (FDA) in May 2016, and Pagano is continuing on the drug indefinitely.

“It’s keeping the cancer in check. I have a good quality of life,” says Pagano, 62, who has been married for 40 years and recently celebrated the birthdays of three out of four of his grandchildren, the youngest of whom was born a year after his cancer diagnosis. “Everyone is thrilled.”

The FDA approval of Tecentriq ushered in the first new treatment for advanced bladder cancer in 30 years. The drug works by binding to PD-L1, a protein that’s found on some tumor cells and is known as an “immune checkpoint,” because it prevents the immune system’s T cells from destroying tumors. By inhibiting this checkpoint, the drug allows the T cells to recognize tumor cells as foreign invaders and kill them.

In the clinical trial that led to the approval, the drug led to tumor shrinkage in 14.8 percent of the patients treated. The responses were most prevalent in patients whose tumors showed high levels of PD-L1 — 26 percent of those patients responded, versus 9.5 percent with low levels of the protein — but the drug was approved for all patients who had progressed on previous therapies.

Side effects of Tecentriq can include fatigue, nausea, diarrhea, itching, rash, shortness of breath, urinary or intestinal obstruction, kidney injury and pneumonia.

Checkpoint inhibitors had previously been shown to work well in select cancers, most notably melanoma and some types of kidney and lung cancers, so oncologists are encouraged by the early signal from Tecentriq that they might also offer new hope in bladder cancer.

“Before this approval, there was really no standard regimen for patients who (progressed on) prior chemotherapy for bladder cancer,” says Daniel Petrylak, M.D., professor of medical oncology and urology at Yale University. “This is a very aggressive disease. Most patients respond and then progress, or they never have any response to chemotherapy. That’s why we’re so excited about Tecentriq.”

Several other drugs that target PD-L1 and a related immune checkpoint, PD-1, also looks promising in clinical trials in bladder cancer. In February 2016, the FDA granted breakthrough therapy designation to durvalumab, meaning that the agency will expedite its review of the PD-L1 inhibitor that sparked a response rate of 31 percent in a phase 1/2 trial of patients with advanced urothelial bladder cancer. Among patients whose tumors expressed high levels of PD-L1, the response rate rose to 46 percent. Side effects were mostly mild and included fatigue, gastrointestinal issues and fever. Several additional studies are being planned for the drug, including one that will combine durvalumab with tremelimumab, a drug that inhibits another immune checkpoint called CTLA-4.

Keytruda (pembrolizumab), a PD-1 inhibitor that’s already approved to treat metastatic melanoma, metastatic non–small cell lung cancer and recurrent or metastatic head and neck cancer, is also being tried in bladder cancer — both alone and in combination with chemotherapy. In an early trial, the drug given by itself produced a 25 percent response rate. High PD-L1 expression, which is often also used to predict response to PD-1 inhibition, did matter in this trial: 38 percent of patients with high levels of the protein responded.

That said, oncologists are somewhat skeptical about the utility of measuring PD-L1 in patients before they administer immunotherapies. Tecentriq is marketed with a diagnostic test to measure PD-L1, for example, says Robert Dreicer, M.D., deputy director of the University of Virginia Cancer Center and professor of medicine and urology, but it’s not clear if it benefits patients to use the test.

“In the trials, there was a somewhat higher response rate in patients whose immune cells showed higher expression of PD-L1, but still about 10 percent of patients who didn’t express it at all responded,” Dreicer says. “For this drug, we don’t yet have an accurate predictive test. We know some patients are going to respond regardless of whether they express this particular marker or not, so we treat all patients.”

The PD-1 inhibitor Opdivo (nivolumab) is also being tested in bladder cancer, and in June 2016, the FDA granted the drug breakthrough designation for that use. The designation came after data was presented at the annual American Society for Clinical Oncology (ASCO) conference showing a 25 percent response rate in a phase 2 trial with patients who had locally advanced or metastatic bladder cancer and whose disease had progressed on chemotherapy. 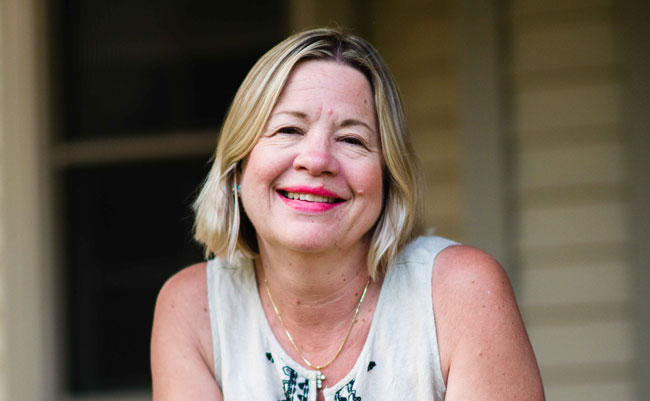 “I have no side effects (from Opdivo) — nothing. They infuse it and I’m on my way for the day. I’m thankful I’m in remission and looking forward.” - Kim Felder


Kim Felder, who is participating in a trial of Opdivo at Barbara Ann Karmanos Cancer Institute in Detroit, was put on the drug to help slow down the spread of her disease, which started in her right urinary tract in 2012 and spread to her lung. Felder underwent two different chemotherapy regimens, but her cancer continued to grow, so she sought an opinion at Karmanos. There, her kidney and ureter were removed, and Felder also had cryotherapy, a procedure that involved freezing her lung tumors to try to shrink them. Since she also showed “in situ,” or stage 0, cancer of the bladder, she underwent a regimen of local immune therapy called Bacillus Calmette-Guerin (BCG), which involves infusing the BCG germ — a non-infectious relative of the bug that causes tuberculosis — directly into the bladder to try to eradicate circulating cancer cells by inducing an immune response. The BCG vaccine was approved for use in bladder cancer in 1998.

After all that, Felder was nearly cancer-free, but a cloudy area in her lung concerned her oncologist, Ulka Vaishampayan, M.D. So in the summer of 2015, Felder entered the Opdivo trial, which was enrolling patients with advanced bladder cancer, and began receiving hour-long infusions of the drug every two weeks. Her lungs have cleared — so much so, in fact, that Felder only has to get imaging scans every 12 weeks instead of every eight weeks, as she did before. Now 57 and working as an occupational therapy assistant, Felder hopes to stay on Opdivo indefinitely.

“I have no side effects — nothing,” she says. “They infuse it and I’m on my way for the day. I’m thankful I’m in remission and looking forward.”

Vaishampayan, who is also director of the phase 1 clinical trials program at Karmanos, says more data will be required to determine just how durable the responses to Opdivo might be, but she’s encouraged by what she has seen so far. “Anecdotally, we see the potential for long-term sustained responses, with some lasting more than a year or even two years,” she says, adding that the side effects for both Opdivo and Tecentriq are similar and easily managed. “These medicines are still new, but we can see that using immune therapy in urothelial cancer works, and that some proportion of patients have durable remissions.”

Now several studies are underway investigating whether immunotherapy should be used as a front-line treatment, rather than waiting to put patients on the drugs after chemotherapy is no longer effective. Some of those trials are looking at combination immunotherapy treatments. For example, a recently launched phase 1/2 trial will compare Tecentriq alone to Tecentriq plus BCG in patients with non–muscle-invasive bladder cancer. That study is enrolling patients in about 10 cities.

In addition to exploring immunotherapy in bladder cancer, several researchers are searching for genetic mutations that might be able to be addressed with drugs. One emerging target is fibroblast growth factor receptor-3 (FGFR3), a gene that’s mutated in an estimated 75 percent of low-grade bladder cancers and 20 percent of muscle-invasive tumors. In one early trial of an FGFR3 inhibitor called BGJ398 in bladder cancer, five out of six patients with mutations in the gene responded. Studies are ongoing in both advanced and early-stage bladder cancer.

Oncologists are also investigating the potential role of drugs that cut off the blood supply to tumors. This mechanism, known as “anti-angiogenesis,” is the basis of several drugs that are approved to treat other cancers, including Avastin (bevacizumab), Nexavar (sorafenib), Cabometyx (cabozantinib) and Votrient (pazopanib). Some of the early data have been encouraging. For example, in February 2015, results from a phase 2 trial combining Votrient with chemotherapy produced a 50 percent response rate, and 11 percent of patients were complete responders. Another anti-angiogenic drug, Cyramza (ramucirumab), was combined with chemotherapy in a phase 2 trial, which resulted in a 24 percent response rate, versus just 9 percent with chemotherapy alone. A phase 3 trial of that combination is now recruiting patients. Vaishampayan is eager to see results from combinations of immune and other therapies that are in early clinical trials, including a phase 1 trial combining Cabometyx with Opdivo and, in some patients, also with the immunotherapy Yervoy (ipilimumab), which inhibits the checkpoint protein CTLA-4; that trial began in 2015. The study, sponsored by the National Cancer Institute, is aimed at determining whether the anti-angiogenic activity of Cabometyx will improve the ability of Opdivo to stimulate an immune response, and also how effective the three-drug combination will be. “Hopefully, that will enhance the immune response, or help patients overcome drug resistance,” she says.

All told, the explosion in research aimed at improving the understanding of what drives bladder tumors — and at developing new approaches to combat them — has made it possible for patients to choose from a multitude of clinical trials. It’s a big change from just a few years ago, Petrylak says, when bladder cancer research was relatively stagnant. “There was no significant clinical activity,” he says. “We’ve gone from that to really a wealth of riches.”
Be the first to discuss this article on CURE's forum. >>
Talk about this article with other patients, caregivers, and advocates in the Bladder Cancer CURE discussion group.