'My Hero, Our Angel': How One Oncology Nurse Changed Patients Lives

One patient talks about how their oncology nurse was a hero to not just her, but many other patients in the clinic.

July 1, 2020, marked 15 years since I received my breast cancer diagnosis. I was young, only 31. I was facing multiple surgeries, three chemotherapies, radiation and countless appointments.

Luckily, my second round of chemotherapy with Cytoxan (cyclophosphamide) and the red devil, Adriamycin (doxorubicin), would not be the same as my first. I was not the ideal patient during my first round. I think back and can see that I was labeled as difficult by my first oncology nurse. She was not there for round two. A different, more seasoned oncology nurse was assigned to deal with me.

This is when Diane Nechi-Fragassi, B.S.N., RN, OCN, entered not only my chemotherapy room but my life. Diane’s demeanor and smile instantly brought me a feeling of calm. This woman standing before me exuded a genuinely kind and caring nature. She introduced herself, and I remember telling her that she must have drawn the short straw that day to be stuck with me. My comment did not rattle her at all.

Of course, Diane did everything she was required to do for my treatment; however, she also did so much more. She communicated with me and kept on top of everything and, in so doing, kept me on top of everything, as well. She sat with me, anticipated my needs, calmed my nerves, eased my fears, informed, listened, advocated and never let much time go by without checking on me if she had to leave my side.

Later that day, I left with a much different feeling and mindset than I had the first time. I was getting dose-dense chemotherapy at first, so I was not due back for a couple of weeks. Diane made me aware of what to expect in the coming days, and during those two weeks, she called every couple of days to check up on me. I went in for my next treatment, and when it was Diane who brought me back to have poison infused into my body, I found myself smiling at the sight of her. After that, I made it a point to request that Diane be my oncology nurse, always to find out that she had already been assigned to me.

I have known many people who have faced cancer and cancer treatments, and let me tell you, I was not that patient coming in dressed all in pink and wearing a tiara or in a superhero cape or cowboy boots, ready to show cancer who was boss. It was not long before I realized that it was “My Diane” who deserved the cape. She was an unexpected, uniquely magnificent, superhuman being whom I was lucky enough to encounter because of my diagnosis. Diane can be described as a cross between a superhero and an angel walking among us. I am not the only person who recognized this about Diane; on many occasions I heard others talking about how magnificent their nurse was, only to find out they too had My Diane.

Diane was with me throughout all my treatments and beyond. She sent cards, made countless phone calls, was there for me whenever I reached out, and stayed loyal and steadfast to me long after she was “obligated” to do so. I don’t know many people who still have their chemotherapy nurse calling them a few times each year, more than a decade later. That is what My Diane did, and I’m certain not only for me.

Over the years, I have stated that anyone facing this horrid nightmare of a disease should have a Diane with them as they fight. My birthday came and went in 2019 and, for the first time since 2005, My Diane didn’t call. I knew something was wrong. Soon I would find out that My Diane had received a diagnosis of a very aggressive late-stage lung cancer.

Diane remained dedicated to her patients. She had a couple of treatments and wanted to return to work and to her patients as she fought her own disease. Unfortunately, this was not possible due to the effects of her treatment.

Never did I think the day would come when I would find out that My Diane had been taken from this world, far too young at age 62. I am still in shock and disbelief. Diane being gone has been more difficult and brought me more tears than my own cancer diagnosis.

To say that I feel less safe with her gone is an understatement. Diane was like a tiny pebble dropped into the vast ocean: She created powerful ripples that are endless. I am so thankful for Diane Nechi-Fragassi. My life would not be the same without her.

Diane mattered to this world. Her life had significant meaning because she made a difference. Diane will be missed and never forgotten. She was not only an extraordinary healer but also an extraordinary human being. “My Diane,” my hero, is now our angel. 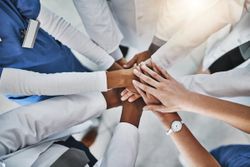