In a finalist essay, Laurie Loe details why Vicki Dodson, B.S.N., RN, OCN, is an extraordinary healer and a great mentor.

Vicki Dodson, B.S.N., RN, OCN, has been serving oncology patients for over 35 years. I first met Vicki when I started working on the oncology inpatient unit at Providence Sacred Heart Medical Center in Spokane, Washington. She was on the day shift and I was on evenings.

I kept hearing about this person known as the “nurse goddess,” and it didn’t take me long to figure out that that was Vicki’s alter ego. As she introduced herself to her patients, sometimes that was the icebreaker she used, along with a huge smile and an infectious laugh that could be heard throughout the unit. Coming in for a first chemotherapy treatment or receiving a diagnosis of cancer can be a stressful time for patients, but Vicki made them feel at ease with her care and compassion. To this day, she keeps in touch with some of her patients with whom she had a special bond.

A few years ago, Vicki decided to become an oncology nurse navigator. In this role, she is able to take more time to listen to patients verbalize their fears, frustrations and concerns. She helps them figure out the confusing health care system and educates them on the treatments, routines and chemotherapy drugs they will be receiving. She also provides her card in case they ever have questions or need anything. Sometimes we take for granted that this may just be part of the job, but Vicki gives so much of her time and self to her patients, not because she has to, but because that’s who she is. She is filled with caring and compassion for these patients.

We treated a young woman in her early 20s whose cancer had relapsed. The doctors all said that even with the chemotherapy and radiation, this patient had just weeks to live. She was engaged to be married, but it didn’t look like she would make it to the intended date. Vicki, knowing how important it was to the young woman, planned the wedding and made it happen in the hospital. I later found out she has planned a few other weddings, too. I also know that Vicki has taken home and washed the clothing of a wife who didn’t want to leave her husband’s bedside.

In the navigator role, Vicki meets with many patients, some of whom don’t speak English. She once came into work two hours before her shift started to meet with a non-English-speaking patient to ensure that he could successfully navigate the hospital and make it to his procedure on time.

Recently, I called on Vicki for help on a couple of occasions. Once it was for a gentleman whose mother had a new cancer diagnosis but lived in a different state. He wasn’t able to be with her because his wife was pregnant and expected to give birth soon, but he wanted some information about the diagnosis. I tried to find some brochures, but we didn’t have any, and I couldn’t find the exact information I wanted, so I called Vicki to see if she could point me in the right direction. Instead of just giving me a message to relay, she came right up and met with this man, who was clearly upset, with tears in eyes. After just a few minutes, she was able to give him the information he needed and the reassurance that his mom was going to be OK: Treatment might be difficult, but she would probably do just fine. As he left, you could see that a little weight had been lifted off his shoulders.

The second occasion when I needed Vicki’s help was around Christmas. We had a very sick stem cell transplant patient who needed extra care, and there was talk of sending him to the intensive care unit. In the process of getting him there and having the doctors see him, his wife was becoming overwhelmed. Vicki was at the desk, and I asked if she had a minute. She said she was pretty busy but asked what was up.

I explained, saying the wife might need a little more support as we worked with her husband. She said nothing but got up and followed me, knowing it was important for that family to have support. Her calm manner with the wife was invaluable. She explained what we were going to do while we took time with the patient. In the end, the wife felt more confident about the care her husband was receiving, and the patient was calmer, too.

Vicki’s passion doesn’t end at work. Recently she found out that a cancer support group had lost its facilitator. The patients showed up but found the doors locked and the room empty. The thinking was that the meeting would have to be canceled until a replacement could be found, but Vicki spoke up and said, “Our patients deserve better.” She volunteered to run the support group until a permanent solution could be found. That meant committing to five meetings a month, which she did without hesitation.

Vicki also belongs to many outside organizations. She’s a board member with Cancer Can’t, a local foundation; a Boy Scout leader; and a member of the Oncology Nursing Society and another local foundation, Because There Is Hope. Once, for a community project, Vicki had her group of Scouts clean the yard of a man who had cancer. He usually kept a very neat yard, but because of his diagnosis and treatment, he wasn’t able to do so at that time. He was feeling some stress because a windstorm had littered his yard with branches and leaves. By providing help, Vicki and her Scouts alleviated this man’s worry.

I could go on with countless examples of how Vicki gives of herself to help others. She is a wonderful mentor, a great nurse and the true definition of an extraordinary healer. I feel privileged to be able to call her my friend. 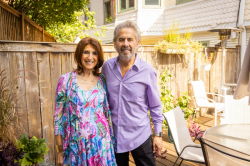