With just one catwalk, the Prostate Cancer Foundation brought together celebrities, fashion designers and a special patient advocate to raise awareness for prostate cancer.
BY Kristie L. Kahl
PUBLISHED March 14, 2018 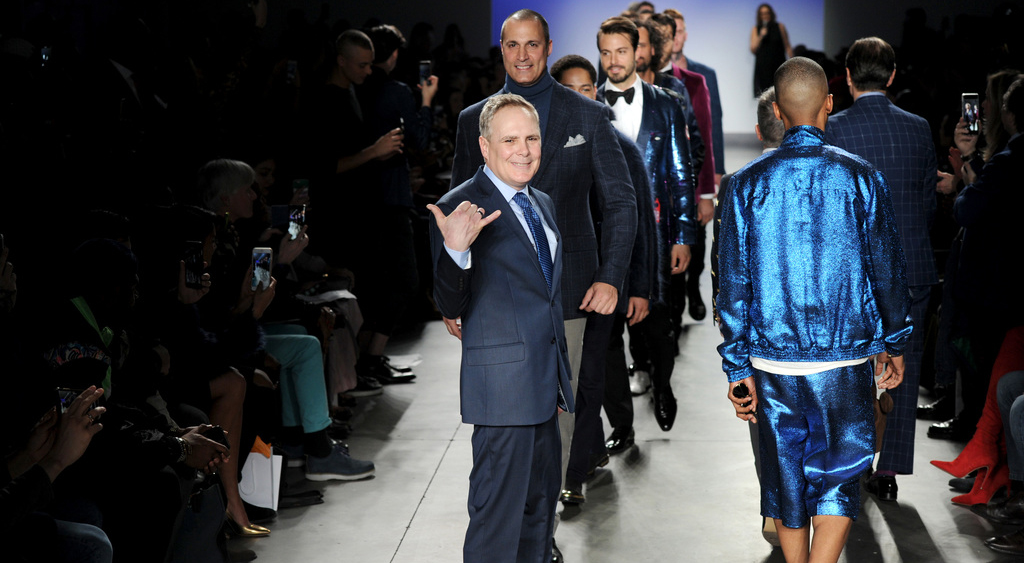 Patient advocate Todd Seals walks in the annual Blue Jacket Fashion Show
What do Bill Nye the Science Guy and fashion designer Michael Kors have in common? Blue jackets, a runway and the ultimate goal of raising awareness for prostate cancer.

“We were approached by Frederick Anderson – a great, young designer, entrepreneur – who had this idea about raising awareness for prostate cancer,” said Jonathan W. Simons, M.D., PCF president and CEO. “In fact, during Fashion Week in New York, there are all of these amazing events that bring visibility to medical research. So, there was this idea that there is so much (centered around) prostate cancer (during) fashion week, why not have blue jackets? And the idea just kind of took off.”

The Blue Jacket Fashion Show is designed so that the fashion, entertainment, health care and media worlds can collaborate around a national platform to openly discuss men's cancer issues, with an emphasis on prostate cancer. In conjunction with these efforts, models, actors, athletes and TV personalities all sported one-of-a-kind blue jackets for the cause.

“There is this silence around the cancer. And when you have a room full of men walking a runway in clothes and talking about the issue, it is starting to normalize the conversation so that it becomes part of a culture that makes it ok to talk about prostate cancer,” said Colleen McKenna, vice president of Marketing and Communications at PCF.

Of note, this year’s show had one very special guest.

This year’s star-studded event also featured patient advocate Todd Seals. In 2006, at the age of 42, Seals was diagnosed with stage 4 metastatic prostate cancer. Surgery was not a treatment option, and physicians gave him approximately one year to live.

Yet, despite the odds and a variety of treatment options later, Seals is coming up on his 12-year anniversary and has no detectable disease. “(Prostate cancer) changed my life like you wouldn’t believe in very positive ways,” he added. “I like to say that prostate cancer is my greatest frenemy because it might have caused a few hardships, but at the same time, it’s done more good in my life than you could ever imagine.”

Since his diagnosis, Seals has become an advocate for the latest treatment advancements and for access and coverage for those with prostate cancer. While he describes his experience with prostate cancer as a “wild, crazy, wonderful ride,” Seals decided to add patient-turned-model to his advocacy résumé, too.

All it took was one phone call, and Seals – who is a resident of a rural town in Washington state – was offered the opportunity to strut his stuff among celebrities and models, a moment he admitted he was a bit taken aback by. “How could I say no, right?” he questioned.

So, after pleading with his boss to allow him to take a last-minute trip, Seals and his daughter ventured to the Big Apple so he could make his catwalk debut.

“I wasn’t nervous or anything until we arrived at Studio 59 and they said, ‘Models upstairs,’” Seals recalled. “I didn’t know what to expect or what to do. But the more I talked to people, they told me to just go and have fun. So, walking down the run way, (I had) fun. I felt a little awkward, but I looked so good! Like, I’ve never looked this good in my entire life!”

With his modeling days now behind him, Seals considered it a privilege to be allotted the opportunity to walk in this year’s Blue Jacket Fashion Show. “It was a blast for me. I love doing stuff like this. I learn something every time I do, (especially) about myself. But it really was a privilege and an honor.”

Now that all is said and done with this year’s show, Seals plans to continue spreading a very important message to men with prostate cancer: Know there is hope.

“If we believe enough, we can change the course of history, but we have to believe,” he said. “That is why I went to the Blue Jacket Fashion Show … (to) share my story in person. I do that because men need to know there is hope. They need to know (a prostate cancer diagnosis) is not a death sentence. They need to know that they have a future.”

To learn more about the Blue Jacket Initiative, visit www.pcf.org/bluejacket.

Be the first to discuss this article on CURE's forum. >>
Talk about this article with other patients, caregivers, and advocates in the Prostate Cancer CURE discussion group.