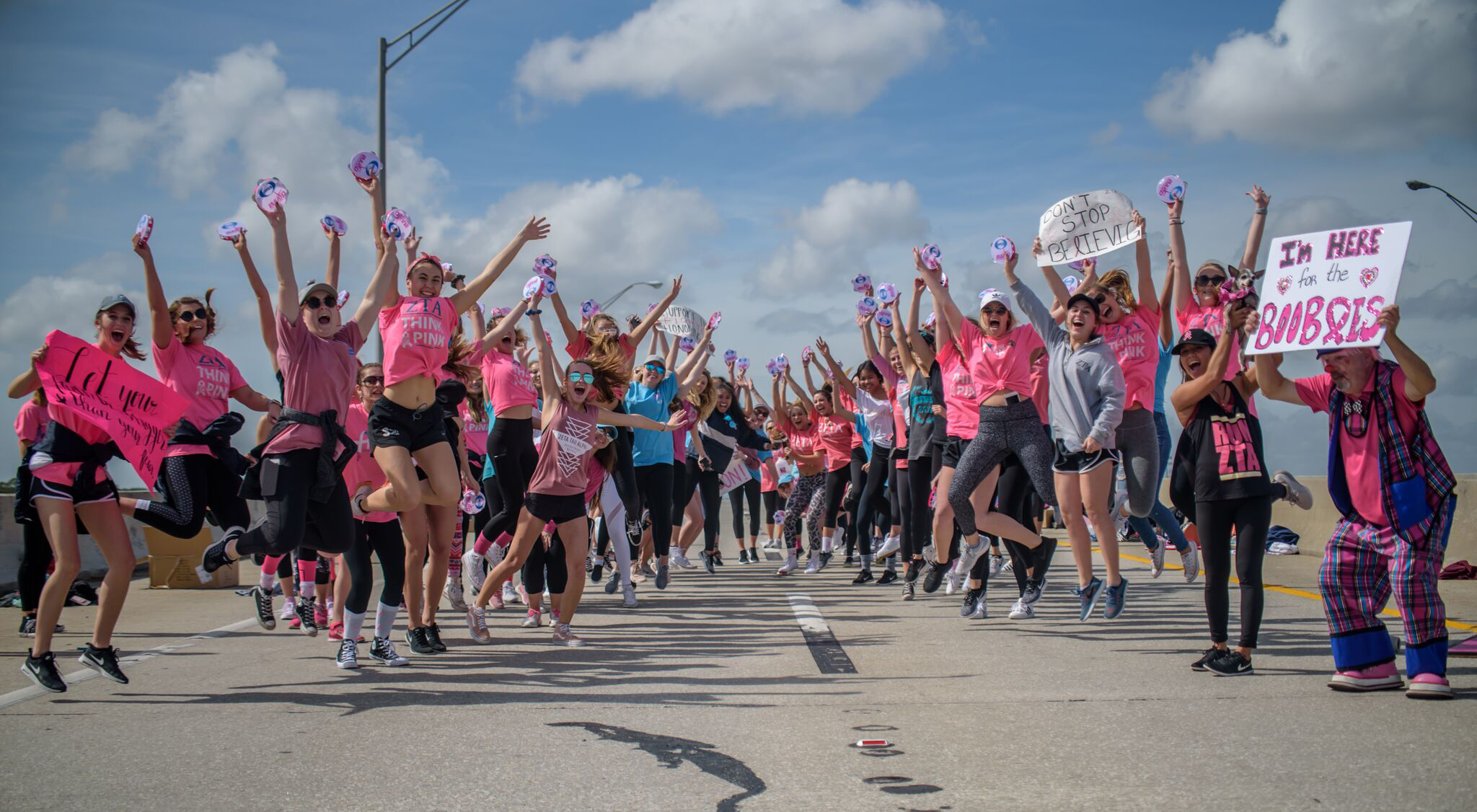 Courtesy of the DONNA Foundation
Every February, runners from all over the country come together to raise funds and run with one specific mantra in mind: Choose love over fear.

The DONNA Foundation hosted its 11th annual DONNA Marathon Weekend, held from Feb. 9-11, to raise money in support of genomics research conducted at the Mayo Clinic Cancer Center in Florida, and also to provide women and their families with financial assistance throughout their breast cancer journeys.

As in years past, the foundation saw much success from the weekend. “I always call it a 26-mile block party … it was just so magical this year. People were out in force, so that was just gratifying,” says Donna Deegan, Founder of the DONNA Foundation.

In 1999, Deegan was diagnosed with triple negative breast cancer, for which she received chemotherapy and radiation. She’d go on to face cancer two more times – once in a deep lymph node in her chest and again when the cancer spread to her left lung – all of which entailed two surgical resections, as well as more chemotherapy and radiation. Since, Deegan has found herself cancer-free for 11 years.

Deegan served as a news anchor during her first diagnosis, sharing her story and real-life experiences on-air. However, after her cancer recurred, she had a different idea on what to do with her diagnosis. “I thought, ‘The audience has already been through a lot with me, and I really don’t want to make this about me.’ And so, I started a blog where I could connect with viewers or breast cancer survivors who wanted to talk to me.”

In writing her first book full of others’ breast cancer stories, titled The Good Fight, Deegan came to find many women were experiencing financial distress associated with their diagnosis. “I started to hear the most heartbreaking stories of people who were having to choose between putting food in their kids’ mouths and taking their medicines,” she adds. “So, I just decided to use the megaphone attached to my mouth to start the Donna Foundation.”

Coupled with a passion for running, Deegan teamed up with Jeff Galloway – a former Olympic marathon runner turned coach – and her oncologist, Edith A. Perez, M.D., from the Mayo Clinic, who is also an avid runner, to culminate the idea of focusing the foundation’s efforts on a marathon weekend.

The DONNA Marathon – which occurs in Jacksonville, Florida – is the only marathon in the United States dedicated to breast cancer research, awareness and care.

This year’s theme was #FindYourFinish, aimed at inspiring participants to find their finish, whether it be in running or walking for the cause, cheering along the race route, donating money or using the power of social media to educate on the importance of finishing breast cancer.

“It was a beautiful weekend,” says Amanda M. Napolitano, Executive Director of the DONNA Foundation. “It was a love injection into this community that we needed. There were so many stories of love and hope and faith and all of the things that you really feel when you come and race this event that had everyone’s love cup full when we wrapped things up on Sunday. So, it fuels everyone’s passion to be joyful in this journey we call life.”

The marathon weekend includes a host of events, such as the Social Shakeout Run, a three-mile run/walk with Donna Deegan, special guests and the VIPinks; the DONNA Expo, a free event featuring apparel, fitness gear, free samples and giveaways; and the DONNA Marathon, Half Marathon, Relay, 10K, 5K and 110 Ultra Marathon.

Although peer-to-peer fundraising does not conclude until March 31, the DONNA Marathon Weekend has raised over $275,000 as of Feb. 27. If the organization hits its goal of $300,000, the Weaver Family Foundation will, in turn, provide an additional $100,000 gift. “We’re getting close,” adds Napolitano.

Since the marathon’s inception in 2006, the foundation has raised over $5 million for both the Donna Care Line – which serves women and their families – and the Mayo Clinic for its Translational Genomics Research Program for Breast Cancer.

“We’ve been around for 11 years now,” says Deegan. “It’s been substantial, we’ve raised a lot of money through the race and through the foundation. It’s been a wonderful way to turn a horrible situation in to something that has really been a gift.”

One runner in particular, Hollis Youngner, is set to contribute $22,000 toward the DONNA Foundation’s Marathon Weekend efforts – all with the help of her family and friends.

“I couldn’t do it without any of them,” says Youngner. “They really are amazing. I tell them all the time I wish I could hug all of you because you really don’t know how much all of you mean in my journey.”

Youngner’s journey began six years ago when she was diagnosed with stage 3 breast cancer – a disease that would eventually return “with a vengeance” two years later, spreading to the lining around her heart, as well as her liver, lungs and abdomen. Even after a surgery that almost cost Youngner her life – she coded for 45 minutes as a result of a pulmonary embolism – the cancer had continued to come back in different areas of or her body such as her ribs and her brain.

However, at the six-year mark of her initial diagnosis in February, Youngner received clear scans showing no active cancer in her body.

Youngner has been participating in the DONNA Marathon Weekend for three years. In 2017, she was able to participate in the Half Marathon, describing the experience as “out of control” and “amazing.”

“Just crossing the finish line was probably one of the best moments of my life,” she says. “They let my daughter come out and put a medal around my neck. My husband, dad, brother and sister-in-law, and all my friends were there to cheer me on, and literally, I couldn’t have had a bigger smile.”

Youngner attributes her desire to participate in the weekend to just one thing: hope.

“I never in a million years thought this would happen to me. And now that I see everyone participating … It just gives you so much hope,” she says. “I really think they are going to find a cure. To be a part of that, holy cow, it’s amazing.”

“I tell women, allow yourself to feel those things that you feel when you’re diagnosed – the shock, the grief, the fear – I get it, let it run through you, and then face it and come out the other side and have a resolve to look at that through a loving lens instead of one that is fearful,” says Deegan.

Napolitano agreed, saying the slogan stands for the foundation’s mantra. “All of us are on this Earth for a limited period of time and you just have to take things day-by-day and not let fear take hold of you.”

With this mantra in mind, and the vast amount of success the DONNA Foundation has seen, Deegan feels nothing but pride. “I do believe we are making a difference, and that is something I am very proud of.”

The next DONNA Marathon Weekend is scheduled for Feb. 8 through 10, 2019. Registration opens May 21, 2018. For more information, visit thedonnafoundation.org.
Be the first to discuss this article on CURE's forum. >>
Talk about this article with other patients, caregivers, and advocates in the Metastatic Breast Cancer CURE discussion group.